After posting a comment in another thread about the 'CDC Study' on Delta behind their nonsensical 'guidelines' from yesterday, another FReeper replied to me, “Vaccinated Gay male outbreak in a single town in single state. That’s the real story. Gay party superspreader events.”

I asked for a source out of due diligence, as such subject matter was lacking in reports I’d read. This morning I recalled the exchange, observed the absence of reply and performed a few web searches:

Content revealed exactly as I’d seen yesterday: The only mention of any detail regarding the source of the CDC ‘study’ referenced Provincetown, Massachusetts. This article – CDC Says ‘Pivotal Discovery’ In Provincetown COVID Cluster Led To Mask Guidance Change For Fully Vaccinated People – was among the first I’d seen.

A screenshot from the video report – which appears to be a shot of event posters in a storefront window – provides a clue:

It references the ‘Provincetown COVID cluster’ surrounding events during the July 4th holiday week. Details of the infected were revealed the week of July 19:

“The numbers show 89 are Massachusetts residents, and 43 are from out of state. Nearly three quarters of infected people are showing symptoms. Ninety-three percent are male patients, with the median age being 35.”

The only honorable mention of the nature of the Provincetown events:

In fact, none of the referenced articles by Boston’s CBS Local affiliate make more than a passing reference to the LGBTQ+ events at the core of the Provincetown COVID cluster (if at all).

If this was really a public health emergency as the Boston Public Health Commission suggests in recommending ”all” Provincetown visitors in Boston getting a PCR test, you would believe there’d be a concerted effort to reach the core demographic of those who had attended events.

Oddly, even CBS Local waxes evasiveness in their video report accompanying this July 24 article, Provincetown COVID Cluster Climbs To 430 Cases; 342 Are Massachusetts Residents with the statement,

”The Hanna family is off to Provincetown from Boston’s seaport, for the town’s annual family week of activities.”

Here is a screenshot of the rather benign Family Week logo:

It should be noted that the female reporter narrating the report placed special emphasis upon ”family” in her report. Why?

”Family Week is a week-long event co-hosted by COLAGE and Family Equality Council where lesbian, gay, bisexual, transgender, and/or queer (LGBTQ) parented families grow together in Provincetown, MA. For more than 20 years, Family Week has supported and inspired, fostered community and friendships, and addressed the unique joys and challenges that arise for LGBTQ families through a week of programs, events, and celebrations.”

Here is a screenshot of their Family Week event:

Here’s a screenshot of their webpage for the theme week event:

Very little effort reveals that nearly the entire summer of festivities in Provincetown was centered around the LGBTQ+ demographic.

It turns out that Provincetown is a known destination for the region’s LGBTQ+ population. An open secret, if you will.

It also turns out that the events the week of July 4 were sponsored by a local gay landmark hotel/restaurant/bar, the Crown & Anchor .

But here is the most outrageous piece of this story: 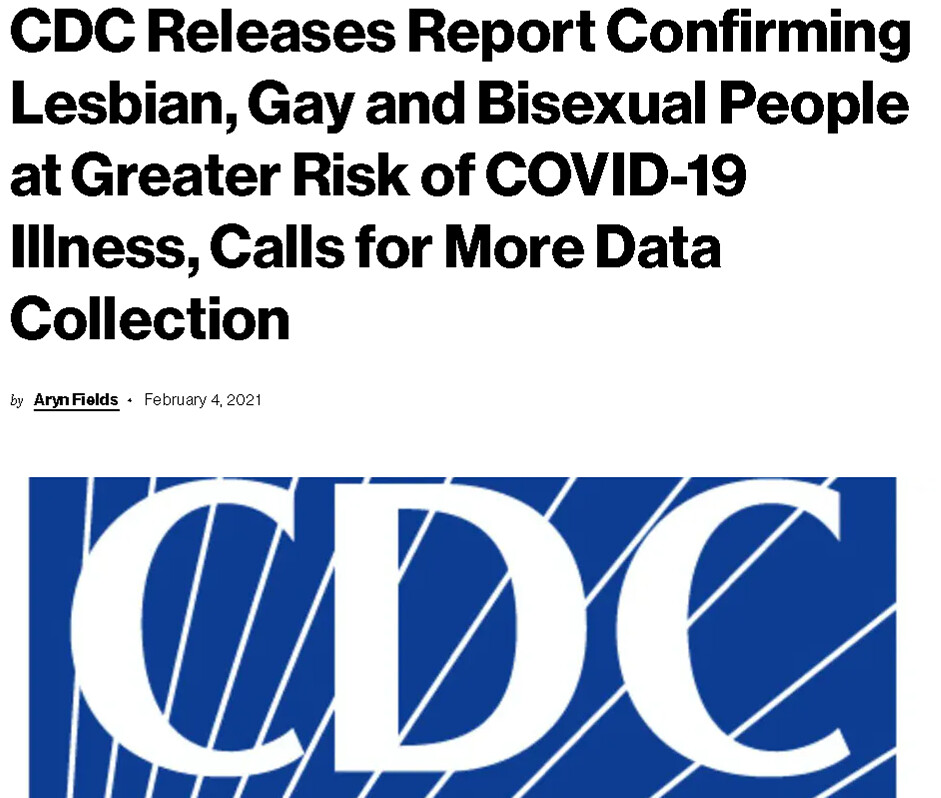 "Today, the Human Rights Campaign responded to a report issued today by the Center for Disease Control and Prevention detailing the underlying health conditions that increase the risk of contracting severe COVID-19 are more prevalent among sexual minorities than heterosexual individuals. HRC’s own analysis of the same datasets show similar risks among transgender people. The CDC also called for more data collection on sexual orientation and gender identity in order to improve knowledge about health disparities"

Notwithstanding the other matter of 'vaccinated' and 'breakthrough cases' surrounding the Indian/Delta mutation, it is rather incredible to this FReeper that their efforts to collect more data and "improve knowledge about health disparities" has translated into lumping the majority of the US population in with the higher-risk lifestyle choices of a distinct minority of those affected by the virus.

I'm not even going to get into the rather UNSCIENTIFIC nature of this so-called "study" behind the CDC's recommendations/guidelines of July 30.

TOPICS: Chit/Chat
KEYWORDS: cdc; censorship; covid; homosexuals; msm; propaganda; provincetown; vaxxedsuperspreaders Navigation: use the links below to view more comments.
first 1-20, 21-32 next last
I am sure that I will receive critique for this post due to either its underlying topic or what may have been obvious to others: Go ahead. I & others prefer facts to spurious claims.

Additionally, research on this subject has revealed that the CDC’s motivation for suggesting the need for renewed mitigation measures is rooted in the vulnerabilities of a demographic with known proclivities for activities with proven higher health risks (homosexuality).

The media’s blatant censorship of the facts is second only to the latter point, which ought to righteously outrage any normal person.

1 posted on 07/31/2021 7:48:46 AM PDT by logi_cal869
[ Post Reply | Private Reply | View Replies]
To: logi_cal869
For a narrative of why this is not a vaccine, the gain of function crowd’s stated objective, and genomic issues with the delta variance, described as informative and “likely the most unvarnished truth that gets posted to these threads,” see reply 9 on this FR post.
2 posted on 07/31/2021 7:56:53 AM PDT by Ahithophel (Communication is an art form susceptible to sudden technical failure)
[ Post Reply | Private Reply | To 1 | View Replies]
To: logi_cal869

If the demographic were area hetro-sexual swingers and Free Love crowd, the results would probably be the same and the the proven higher health risks would also be similar....Not because of preference of one sex versus another, or all sexes, but that “known proclivities for activities” that require close contact with one another....

It’s all about the Big O....that brings down mankind’s downfall.

I have always highlighted that there were none of the prevention methods currently implemented used during the AIDs outbreak of 1980’s. So if in fact Gay Events were the source, what prevention methods will now be required? Will Gay Event gatherings be banned? Will police be sent to break up Gay Events? Of course just asking for a friend!

So you have a lot of people gathered in one spot....and some public health official has them all tested....you get a lot of positive tests...big deal....

Had it ever been acknowledged they gay males have compromised immune systems irrespective of any HIV present?

Thanks Ahithophel for your posts! Good stuff!

CDC numbers from Provincetown. Men especially gay men are very susceptible to the Wuhan virus. 100% of those infected were LGBTQ with 98% being Gay males. This correlates to gay men being super spreaders a million times more likely than Normal people.

can you say vaccine ?

It’s funny how some articles about this “outbreak” fail to mention the fact that it happened in P’town. Kind of reminds me of how the media willfully omits a killers race or religion when they do certain things, in an attempt to hide certain facts.

P’town is gross. It may look like the quaint little New England, sea side town, but it’s gross. Think of Sodom and Gomorrah.

And if you think about it, the CDC and the puppet masters chose a perfect place. You don’t agree with anything they push, you’re either anti-vax and know NOTHING or you’re homophobic and don’t care that gays are sick.

Most glaring in this respect is the TOTAL ABSENCE of evidence of any other July 4 outbreak clusters.

All the media can report are a curious set of random ‘high case counts’ which are suspiciously not near any international airports (i.e., foreign travelers or US residents returning from abroad).

Those embracing the notion agree that it is likely that the widely dispersed, patternless sets of ‘cases’ reported by the media are likely the result of traveling illegals, courtesy our own government.

All the evidence today suggests that the greatest risks posed to a majority of the “vulnerable” US population are by 2 very distinct minority groups: Gays & illegal aliens...the latter a matter deserved of its own analysis.

Certainly not warranting a reversal of a return to normalcy.

But it’s not politically expedient to go criticizing 2 beloved demographics of the Democrats, now is it?

You miss the point:

It’s motivated talk from Biden himself of some rather tyrannical actions in the face of their cited study.

rooted in the vulnerabilities of a demographic with known proclivities for activities with proven higher health risks (homosexuality).>>>> This also might explain LA, San Fran, New York, and other cities. Peter Duesberg also insisted that HIV was mostly a lifestyle disease as the gay population was very much into “angel dust” parties. But he was pilloried into oblivion.

No wonder the sharks are suddenly feeding on humans off the cape....

Thanks. I do hate it when claims are made without citation (the post’s opening comment), but in this case it served to prompt an expose’ of a perverse motivation to both protect a beloved liberal demographic and punish the majority of the population for that group’s actions.

Furthermore, the ‘single study’ aspect of their justification of their actions was bad enough, but failing to cite the facts behind this group from THEIR OWN PREVIOUSLY PUBLISHED STUDY seriously diminishes the credibility of these CDC asshats.

“Unscientific” is a gross understatement. If our GAY tyrant governor even whispers about renewed lockdowns, etc., I can’t predict the anger which will manifest in the face of this revelation today.

Had it ever been acknowledged they gay males have compromised immune systems irrespective of any HIV present?>>> Peter Duesberg theorozed the HIV was always a lifestyle disease as the gay population had huge drug parties. so the incidence of cancers and other resperatory diseases were more likely caused by the lifestyle than any actual retrovirus. and the so called HIV never spread to heteros or others. Same guy in charge Fauci.

Remember when they banned church services to prevent the spread of COVID. Are the going to ban Gay Events?