"There is no doubt it has been used to alter elections in other countries," Powell said, explaining the system was developed at the direction of Venezuelan dictator Hugo Chavez to remain in power.

"The Dominion Voting Systems, the Smartmatic technology software and the software that goes in other computerized voting systems here as well, not just Dominion, were created in Venezuela at the direction of Hugo Chavez to make sure he never lost an election...we have one very strong witness who has explained how it all works. This affidavit is attached...it is a stunning, detailed affidavit because he was with Hugo Chavez when he was being briefed on how it works," Powell said. "He has seen it operate and as soon as he saw the multiple states shut down the voting the night of the election he knew the same thing was happening here."

During the 2020 presidential election, Powell alleges Dominion voting systems were used to flip votes from Trump to Biden.

"One of its most characteristic features is its ability to flip votes. It can set and run an algorithm that probably ran all over the country to take a certain percentage of votes from President Trump and flip them to President Biden," Powell said. "Notably, the Dominion executives are nowhere to be found now. They're moving their offices overnight to different places. Their office in Toronto was shared with one of the Soros entities."

As far as where the campaign goes from here, Powell explained the legal team isn't giving up and in fact, is just getting started.

"This is stunning, heartbreaking, infuriating and the most unpatriotic acts I can even imagine for people in this country to have participated in, in any way, shape or form. And I want the American public to know right now, we will not be intimidated. American patriots are fed up with the corruption from the local level to the highest level of our government and we are going to take this country back. We are not going to be intimidated. We are not going to back down," she continued. "We are going to clean this mess up now. President Trump won by a landslide. We are going to prove it and we are going to reclaim the United States of America for the people who vote for freedom."

“The Dominion Voting Systems, the Smartmatic technology software and the software that goes in other computerized voting systems here as well, not just Dominion, were created in Venezuela”

I hadn’t realized that Venezuela was such a tech hot-spot.

funny how most people saw it that way on election day (4 Nov in Australia which is ahead of US time):

4 Nov: The Australian: US Election: In 2020, it’s still the economy, stupid …
By Natasha Robinson
Joe Biden thought he’d read the national mood — Americans were more worried about coronavirus then they were about the economy. But as voters filed out of ballot booths, his miscalculation became clear.
Exit polls showed the economy was easily the single-biggest factor influencing votes in the US election...
And it may yet keep Donald Trump in the White House...

But an exit poll conducted by Edison Research for major American television networks, said only two out of 10 voters nominated the pandemic as the most important issue. The economy rated as the top-order issue for one-third of voters polled, including six out of 10 voters who supported Mr Trump...

Salvatore Babones, a political sociologist at the University of Sydney, said the importance of the coronavirus to voters’ intentions had been overstated. “For ordinary people, it’s the economy that matters most,” he said...

Professor Babones said Mr Biden’s decision to shun rallies may have cost him crucial votes.
“The Democrats ran an empty chair campaign against Donald Trump,” he said. “Campaigning would have made a difference.”...
https://www.theaustralian.com.au/world/us-election-in-2020-its-still-the-economy-stupid/news-story/c3d1f8c39aacca138b5a3c601ba328d8

and why wouldn’t Trump have won?

16 Nov: The Hill: Why Trumpism is here to stay
By Kristin Tate (libertarian author and an analyst for Young Americans for Liberty. She is a Robert Novak journalism fellow at the Fund for American Studies)
If Biden is inaugurated on January 20, it won’t be because the Trump agenda is unpopular. Generally speaking, Americans have benefitted from policies associated with “Trumpism.” Just weeks before the presidential election, an impressive 56 percent of voters said they were better off than they were four years ago; that 56 percent is higher than when the same question was asked in 1984, 1992, 2004, and 2012, when Ronald Reagan, George H.W. Bush, George W. Bush, and Barack Obama ran for reelection.
It’s easy to see why...

Still, on election night the GOP made strong and unexpected gains that will severely impair the ability of Biden, and Kamala Harris, and Nancy Pelosi to steer the legislative ship. The final tallies are not yet out, but the House and Senate results indicate that hundreds of thousands of Americans simultaneously voted against Trump but for Republicans who backed his policies down-ballot. This suggests that many of these voters approve of Trumpism as a platform, but not of Trump himself...

The “Make America Great Again” platform proved to be remarkably popular well outside of the traditional white working class. Consider that Trump won Native American voters, dramatically increased his share among black and Latino voters, and even doubled his support in the gay and transgender community. When you combine the president’s populist policy prescriptions—namely tax cuts, America-first manufacturing, strict immigration measures, and little foreign intervention—together, and subtract out Trump’s personality, you get a majority of voters...
https://thehill.com/opinion/white-house/526166-why-trumpism-is-here-to-stay

30 Oct: The Hill: Trump or Biden? On the economy, the choice is clear
By Liz Peek
Americans have a choice: They can vote for President Trump, the candidate who just delivered the fastest quarter of growth in the nation’s history, or for Joe Biden, who as vice president presided over the slowest economic recovery since World War II.
The difference is stark.

The Commerce Department just announced that gross domestic product grew at an annual 33.1 percent rate in the third quarter, topping expectations and doubling the prior record period of growth set in the 1950s...

Consumer and business optimism soared in the weeks after Trump was elected. Consumer sentiment in September 2016 was recorded at 89.8; by December, post-election, the index had jumped to 98.2. That represented a 12-year peak, according to the University of Michigan at the time.
According to their press release, the “expected favorable impact of Trump’s policies on the economy” influenced the survey.

Even today, consumers remain surprisingly upbeat, in spite of the sharp second-quarter downturn and, more recently, the cutoff of extra unemployment benefits. The October University of Michigan survey puts sentiment at 81.2, up from the low of 71.8 recorded in April.
Of course, optimism is way below the peak of 101 reached in February, before the virus hit — a level not once reached during the Obama-Biden years. Not once.

Under Trump, business sentiment rallied too. Post-election in December 2016, the National Federation of Independent Business (NFIB) survey of small-business optimism reached its highest level since 2004.
Like consumers, small-business owners, the backbone of our economy, are upbeat in spite of the downturn...

Biden seems to have learned nothing from the sluggish recovery the country endured during his time in the White House. Given the chance, he intends to reenact the Obama regimen of heavy regulation and higher taxes...
https://thehill.com/opinion/finance/523511-trump-or-biden-on-the-economy-the-choice-is-clear

Please prove it to the right people. About 9 of them. Guessing they are pushing this to the Supreme Court.

Venezuela used to be a highly functioning economy. Back before Chavez got a hold of it.

The media is looking the other way. They see Covid Covid everywhere and Joe Joe and Kamala to the rescue. 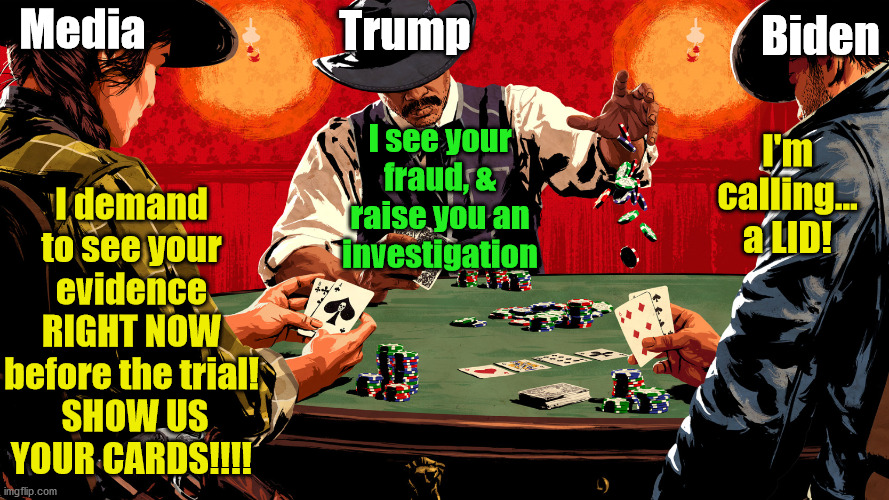 May it be so, mighty King Yeshua!

If I worked at Dominion, I’d separate from service and get my 401k money now, or end up like an Enron employee.

It is not. The development was FINANCED by Hugo Chavez of Venezuela. Besides a tabulating software is not all that sophisticated. It is not sending a rocket ship to mars, or finite element analysis.

It is time to make reservations for Trump’s inauguration!

Venezuela is not a tech hot-spot.

Venezuela is a "how to cheat to win elections" hot spot.

It’s ok. He is gonna follow the science. He has 0 plan and he knows it. He is gonna shut down the virus. Lmao. Because Trump already had a vaccine in the works. Amazing how they announce it after election.

It was a front for a CIA operation.

I cannot think of any reason to vote for the Sniffer, unless, you like being lied to.

That is REALLY annoying and I have no idea what you are saying.

Not a PEEP about this in my local media. 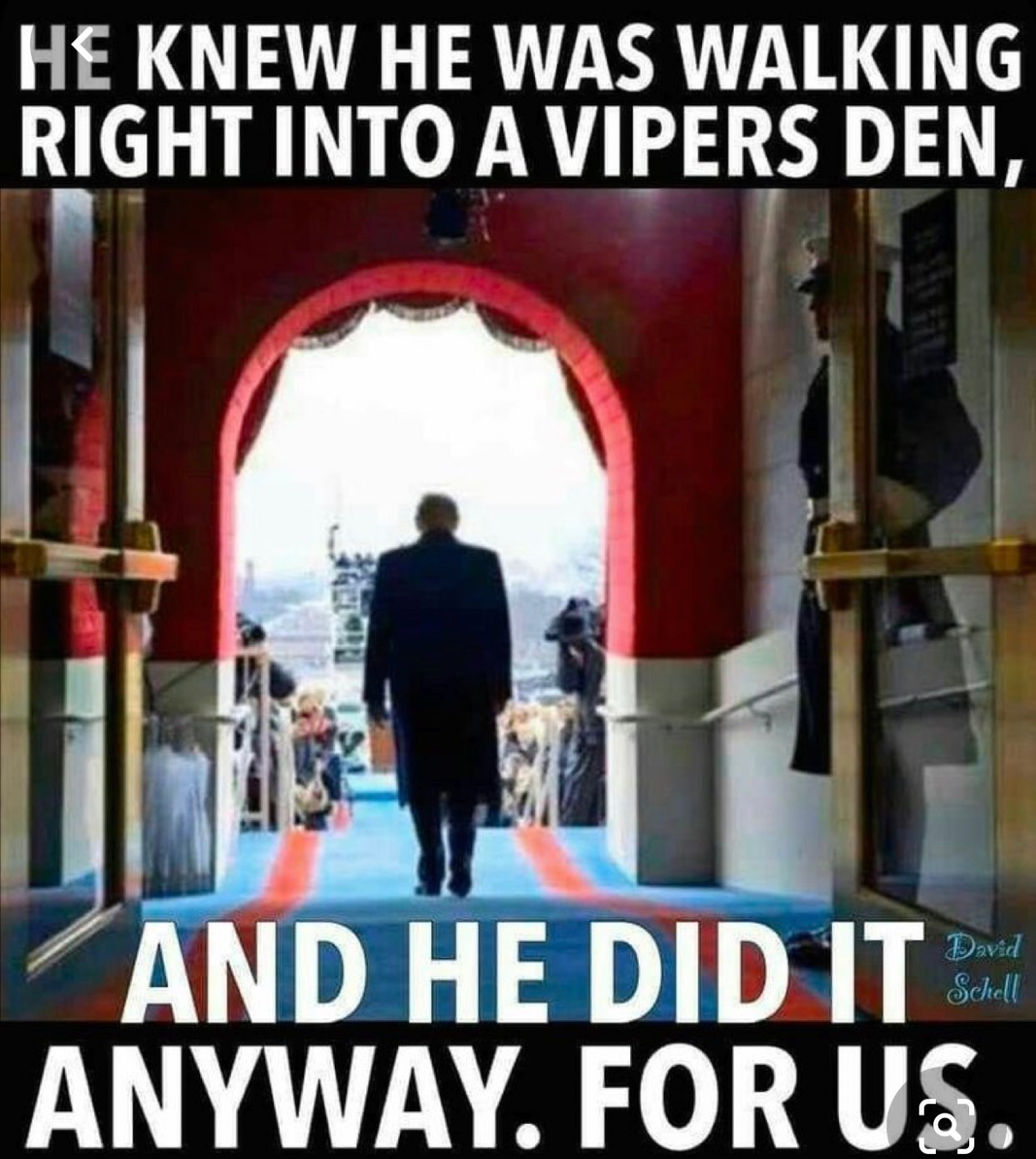 I mean, literally if nothing else, Trump is doing his masterful flip-the-script, taking Democrats complaints about voter fraud in 2000 and 2004 and just ramming it down their throats, while dragging their zombie through the glass.

But I believe the Democrats are making a huge tactical error here -- thanks to a fairly successful press conference, we now own the #Narrative through the weekend, and Sunday offers the one chance -- THE ONE CHANCE -- for Republicans other than the tireless Rudy to populate the Sunday shows and drive home to the electorate that this race is rotten at the top.

And again, all that needs to be done is unmask comms between Biden, Dominion, these state SoS, bank records, Maduro, Barcelona, Frankfurt, and most of all, bring Eric Coomer into protective custody with a warrant to testify before the Senate on Monday.