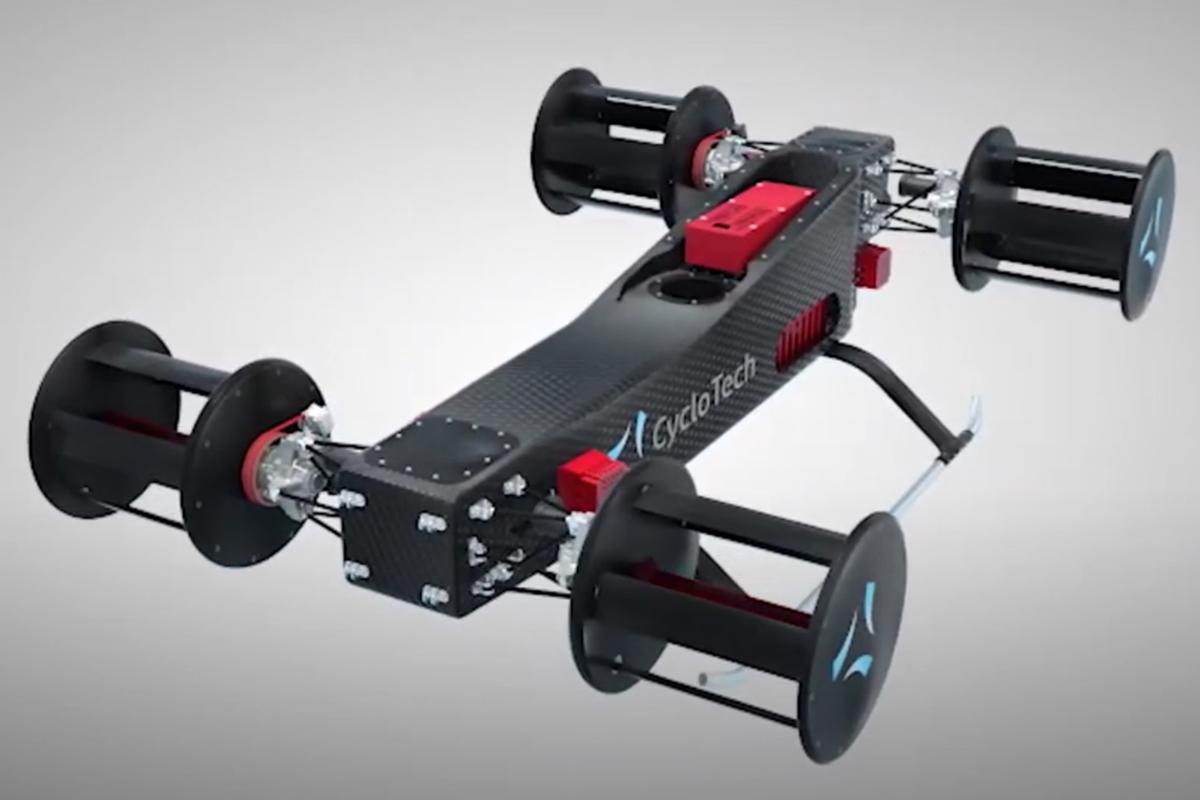 Austrian company Cyclotech is planning to begin flight-testing an 80-kg (176-lb) demonstrator of its unique electric VTOL airframe, which uses Voith-Schneider propellers instead of rotors for exceptional agility and control in the air.

The prop design, which looks a bit like it belongs on the back of an 1850s paddle steamer, was patented nearly 100 years ago but hasn't made it into a production aircraft yet. Each prop is a spinning cylinder whose walls are formed by a number of wing blades.

The secret to the agility of this "Cyclogyro" arrangement is analogous to the way helicopter blades work, continuously altering the angle of the blades as they spin to adjust and direct lift using a "swashplate." In the Cyclogyro arrangement, a mechanical linkage – conrods connected to a central hub – is able to tilt and angle the wing blades as they spin around the cylinder, tilting them gradually into the wind as they reach a certain point in their rotation, and then gradually back to flat as they pass the peak point.

The ability to quickly move that hub and redirect thrust makes this an exceptionally fast-responding system compared to the rest of the eVTOL market, which all need to apply torque and spin rotors up to get the job done. And unlike traditional prop-driven designs, each Cyclogyro's thrust can be directed in any direction on its rotational axis – forward, backward, up, down and anything in between – nearly instantly. So its ability to spin on a dime will be pretty epic if you're looking for a next-generation vomitron. 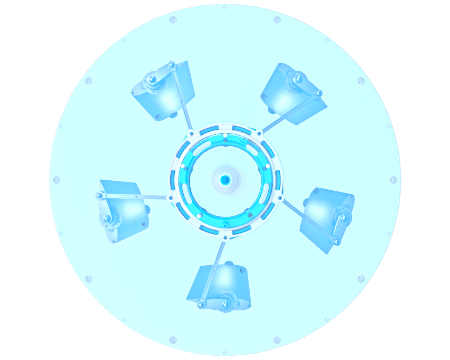 The blades are connected to a central hub with conrods that can alter their tilt as they move around the circle. Moving the hub off-center gives the blades extra lift at a certain point in their travel, making for near-immediate changes in thrust direction and force.Cyclotech

The ability to instantly alter the amount and direction of thrust at each rotor without having to change engine speed also means a Cyclogyro aircraft doesn't necessarily need to be electric. After all, the key reason why there aren't a lot of gasoline-powered drones out there is the delay between the throttle and the rotor speed, which makes them unresponsive.

So, while there's literally nobody out there crying out for a fossil fuel-powered VTOL air taxi, there's also really no battery solution that can deliver a useful range at the moment. Hydrogen-fuel-cell powertrains are certainly looking promising thanks to much higher energy density, but at the same time nobody's definitively demonstrated one of those in a full-scale eVTOL yet either. This rotor design will work with any powertrain that can keep those paddle wheels spinning, and who knows, that may prove to be a killer advantage.

Cyclotech's current-gen prototype is a carbon fiber cylinder 420 mm (16.5 in) long and 350 mm (13.8 in) in diameter, with five tilting carbon blades, spinning at 3,100 rpm and developing a maximum thrust of 247 N (55.5 lb). We'd be interested to know how the efficiency compares to a regular ol' propeller, especially since energy becomes a jealously guarded resource in the electric world.

These are presumably the props we'll be seeing on an upcoming 80-kg (176-lb) electric demonstrator aircraft the team says will be ready to fly in Q4 this year – although 2020 has been a tough year for timelines globally.

It could also be used on smaller drones, where the lack of a passenger comfort requirement could really take advantage of the technology's supreme agility. Mounting rotors in a ring-shaped arrangement would give them 360-degree horizontal thrust capabilities without the need to tilt; that could be very handy anywhere that precise placement is critical.

It could also be used to remove the need for a tail rotor on a compound helicopter design, where a pair of Cyclogyros could balance out the torque from the main rotor while also providing additional lift and directional thrust where appropriate. The company says this could let you run a smaller top helicopter rotor.

If this all sounds a little familiar, we ran into an earlier incarnation of this company at the Paris Air Show in 2011, when it was called IAT21, the aircraft was known as the D-Dalus, and a medium-sized prototype was flying with the aid of a 120-hp KTM motorcycle engine under the supervision of inventor Meinhard Schwaiger. Schwaiger is no longer involved, telling us he left the company in 2016 before its renaming to Cyclotech.

We've reached out to Cyclotech to learn more and hope to bring you an interview soon. Check out a video below.

Technology catches up with ideas. Sometime it takes a while.

There was a hydrogen peroxide-powered one person helicopter whose name translated “Grasshopper” from Latin or some such language. There were catalytic jets at the extreme ends of the propeller. It was sold by The Sharper Image about 25 years ago and cost something around $80,000.

It was my dream machine.

I told those young fools at Kitty Hawk and now I’m telling you: heavier than air flight is impossible. Lord Kelvin proved it. It’s settled science.

Way too many moving parts.

Just use a bigger rubber band.

I want one with blue pinstripes and a spoiler.

Just another 10 years worth of development and they’ll be ready to get FAA approval...

To the article’s “gas vs electric” point (gas has inadequate torque, electric weights to much for range), surely a compromise can be implemented: gas for bulk of power, electric for short burst torque.

9 posted on 10/26/2020 1:29:06 PM PDT by ctdonath2 (Interesting how those so interested in workERS are so disinterested in workING.)
[ Post Reply | Private Reply | To 1 | View Replies]
To: Red Badger
This blade configuration has been around a long time and is known as the Voith Schneider Propeller. It is very common on tugboats. 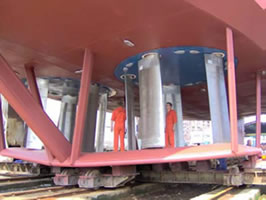 No, no, bad engineer!

That kind of prop is fine in viscous fluids at low-ish RPMs. At the kind of RPMs needed for flight in air, a ducted fan or other ‘normal’ prop configuration would be much more effective.

This would just be a squirrel cage blower without the ductwork.

(But agree, they are cool on tugboats, and Graf Zeppelin)

The next engineering evolution with impact potential similar to the cell phone...

Blade flutter has always been the downfall of the design. That is one reason carbon fiber’s rigidity may prove sufficient in this application.

No one has done much serious work with the Coanda effect recently. The back story is that Henry likely was the first jet jockey back in about 1928, when he crashed his prototype engine in a biplane.

He used a radial piston engine to drive a turbo-compressor supplying air to a cylindrical combustion chamber. An exhaust pipe exited this combustion chamber on each side of the fuselage. On a taxi test he lost focus on the aircraft velocity and position due to the fiery exhaust hugging the aircrafts flammable fabric skin—the test thus became a short flight to avoid a crash into a structure.

The extraordinary behavior of the exhaust gas flow diverted his focus from the engine development to flow dynamics, thus requiring another decade for development of a gas turbine engine.