"It was said that Ruth wanted to be an opera virtuoso but became a rock star instead," Chief Justice John Roberts eulogized. "She found her stage right behind me, in our courtroom."

TOPICS:
KEYWORDS: ginsburg; learnhowtopost; roberts Navigation: use the links below to view more comments.
first 1-20, 21-31 next last
In the Washington Post, Georgetown University law professor Paul Butler took Justice Ruth Bader Ginsburg to task for her notoriously poor law clerk hiring record. Despite her status as a progressive icon, the Notorious RBG has anything-but a progressive record when it comes to the diversity of her law clerks. As Butler notes, “Ginsburg’s progressive jurisprudence on racial justice doesn’t show up in her own chambers.”

Kavanaugh has engaged in one of the most diverse hiring practices of any federal appellate judge. Of his 48 law clerks, a little more than 25 percent have been nonwhite. And as a justice, he has already hired one African American clerk. She is one of only three blacks clerking on the Supreme Court this year — two of whom previously clerked for Kavanaugh on the Court of Appeals. . . .

Ginsburg, on the other hand, has hired only one African American law clerk in her 25 years on the Supreme Court. This is an improvement from her 13-year tenure on the U.S. Court of Appeals for the District of Columbia Circuit, when Ginsburg never had any black clerks. When this issue was raised during her Supreme Court confirmation hearings in 1993, Ginsburg said: “If you confirm me for this job, my attractiveness to black candidates is going to improve.” This remains a promise unfulfilled. . . .

Kavanaugh’s clerkship listing should state “This employer practices diversity affirmative action. People of color strongly encouraged.” Ginsburg’s might as well say “I support racial diversity everywhere except in my chambers.”

she became worm food, and FINALLY contributed to the planet in a positive way!

Progressivism is racism. Progressives want to keep Blacks on the Dem plantation. They want Planned Parenthood to keep killing black babies in the ‘hood. Progressive Woodrow Wilson was extremely racist — even by the standards of his time.

is that the way an Epstein Island implant into
SCOTUS looks at it all?

No wonder he MET with Obola while the case with
him as a litigant was before him as “judge”.

No wonder at all. Both had taken children from others.

Why would the writer be surprised that “Buzzy” didn’t hire blacks? The quote given with her photo at the top of the thread says it all. Ms. Ginsburg obviously agreed with Margaret Sanger’s desire to eliminate the “human weeds” in our population, through abortion. Hence, this statement in the quote accompanying her photo: “...and particularly growth in populations that we don’t want to have too many of.”

Democrat voter, in huge part, I imagine, are looking at a world in which they will have to face the guilt of their murdering their innocent children through abortion

They don’t consider facing God with it they believe they are their own god. Natural law tells them otherwise.

Then there are those who are ignorant and through the dysfunction their ignorant lives have created, they enjoy jumping on the hate bandwagon

This is the wrath we are seeing. In my view.

It is wrapped in the hell they face.

I think abortion is disgusting, and think the rabid supporters are evil scum, but...We would be up to our necks in “kangs”, “queens”, and “dindu nuffins” without roe vs. Wade. Every suburb would look like Camden, NJ. I say keep let God judge the individuals involved when they meet their maker. Until then i still want to have a functioning society thank you very much.

It now makes sense why RBG hung on even as cancer was eating her away.

She apparently made a deal with the devil.......a Pres (gag) Hillary was supposed to replace her with Obama.

Please pardon my ignorance, but what does your headline mean?

Did Chief Justice Roberts say something unprintable about RBG?

“It was said that Ruth wanted to be an opera virtuoso but became a rock star instead,” Chief Justice John Roberts eulogized. “She found her stage right behind me, in our courtroom.”

1. Upholding the law shouldn’t be about personalities. Its not a performance, its jurisprudence.

2. Its not THEIR courtroom and its certainly not a stage. Its a tribunal that belongs to the people of this land.

Roberts is a clueless disaster.

a Pres (gag) Hillary was supposed to replace her with Obama.

I doubt that. Obama is basically a lazy person whose work on the Harvard Law Review is non-existent. He’s not interested in anything that might require hard work. He’d rather be out on the golf course or vacationing in Martha’s Vinyard.

The Obama’s are hedonists.

RBG wasn’t a rock,
She was a rock LOBSTER!

(Sorry, that song’s been stuck in my head)

Ummm, you just agreed with RBG about black population control? There is no way anyone can know what America would look like right now if there was no Roe v. Wade. Chances are just as good that it would be way better than it is now.

Can you please explain what those words mean?

Roberts has apparently gone soft in the head. I understand he’s had some seizures in the past. I wonder if there might be some damage to his brain. Seriously. 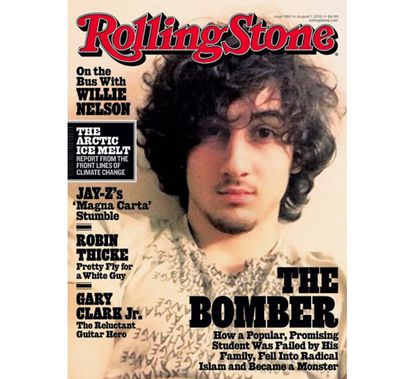 Here's another rock star. When does RBG's face on the cover of the Rolling Stone come out?

Praise of this Constitution-defying liberal is absolutely sickening. RBG performed her notorious acts for decades on the earthly stage of the supreme court and now she gets to perform for an eternity before an audience of her peers.

Typical eulogy from a pusillanimous go-along source. No one will care what he said in 24 hours.