United Launch Alliance early Thursday delayed the launch of a triple-core Delta 4-Heavy rocket — the largest launcher in the company’s fleet — until Saturday to allow engineers more time to resolve an issue with a ground pneumatics control system.

The launch company planned to fire the Delta 4-Heavy rocket into space at 2:12 a.m. EDT (0612 GMT) Thursday from Cape Canaveral with a classified payload for the National Reconnaissance Office, the U.S. government’s spy satellite agency.

But the ULA launch team halted the countdown to give technicians time to troubleshoot an issue with a nose cone heater. Ground crews replaced two blown fuses associated with the heater to fix that problem.

But engineers studying a separate snag with a “critical ground pneumatics control system” could not resolve the problem in time to resume the Delta 4’s countdown, fuel the rocket and proceed with the launch before the closure of Thursday’s roughly four-hour launch window.

ULA said the team needs additional time to evaluate and resolve the issue with the pneumatics system. After initially considering a launch attempt Friday, ULA said later Thursday that the mission would be delayed until Saturday.

There is an 80 percent chance of good weather for launch of the Delta 4-Heavy rocket Saturday at 2:04 a.m. EDT (0604 GMT), according to the U.S. Space Force’s 45th Weather Squadron at Cape Canaveral.

“Additional time is needed for the team to validate the appropriate path forward with the ground pneumatics control system,” ULA said in a statement.

Powered by three hydrogen-fueled main engines and a long-endurance cryogenic upper stage, the Delta 4-Heavy rocket is set to loft a top secret NRO spy satellite into a geosynchronous orbit hugging the equator more than 22,000 miles (nearly 36,000 kilometers) above Earth.

TOPICS: Business/Economy
KEYWORDS: delta4heavy; elonmusk; falcon9; falconheavy; spacex; spooks; ula
1 posted on 08/27/2020 10:49:41 PM PDT by BenLurkin
[ Post Reply | Private Reply | View Replies]
To: BenLurkin; null and void
Payload for the NRO? Seems like these vehicles are great for that. Must be a big bird (cough sorry). I mean, satellite for studying the Sun's corona. Because we would never say the KH-11 was as big as a city bus and we're waaaaaay past that one. 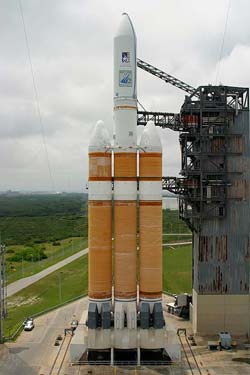 “This signals intelligence spacecraft is so large, that when seen from Earth, it shines with the brightness of an 8th magnitude star, making it easily visible with small binoculars.”

Before the launch in 2010 of a suspected Advanced Orion satellite, then-director of the NRO Bruce Carlson called the payload the “the largest satellite in the world.” The satellites are believed to carry giant antennas that unfurl to a diameter of up to 100 meters, or 328 feet, once in space.