Today, Second Lady Karen Pence joined Vietnam Marine Veteran, Terry Sharpe, known as “The Walking Marine,” for the last leg of his eighth and final walk from Stokesdale, North Carolina to Washington D.C. Mrs. Pence joined Terry at the Washington Monument and walked with him to the White House. On the walk, Mrs. Pence was able to hear more of Terry’s story and his passion to bring awareness to veteran suicide prevention.

Upon arrival to the White House, President Trump and Department of Veterans Affairs Secretary Robert Wilkie surprised Terry by greeting him on the South Lawn. Terry was welcomed by guests and supporters as he and Mrs. Pence crossed the finish line.

“Every day we lose an average of 20 veterans to suicide and today it was an honor to walk alongside Terry in his mission to end this tragedy,” said Second Lady Karen Pence. “More than ever before it is important to bring attention to this issue and do all that we can to help those who served this Nation.”

On July 1st of this year, 69-year old Terry started his annual 300 mile walk to Washington D.C. to raise awareness of the current veteran suicide rate, which stands at 22 per day. In addition, Terry also brings attention to Veteran hunger and Veteran homelessness, both of which have a direct correlation to the Veteran suicide rate. To learn more about Terry’s story, click here.

Pres gives a thumbs up in photo with "Walking Marine" Terry Sharpe, on completion of his 8th and final 300-mile journey from NC to the WH. Also congratulating Sharpe are @SecWilkie and @SecondLady, who walked the last let with Sharpe from the Washington Monument. pic.twitter.com/AuBwHHZ0dt— Mark Knoller (@markknoller) July 27, 2020 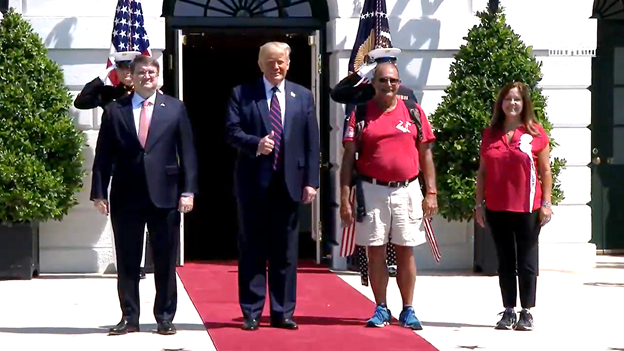 I agree with you. Some ridiculous titles - demeaning.

So what’s house speaker’s spouse who is in line of succession?

The term “Second Lady”, coined in contrast to “First Lady” (who is almost always the wife of the president), may have been first used by Jennie Tuttle Hobart (whose husband, Garret Hobart was vice president from 1897 to 1899) to refer to herself.

Thank you! That’s a very interesting little “factoid” to keep in my pretty much-overloaded brain. LOL!

Julie in Quebec; originally from Chicago.

My poor hometown, being destroyed by thugs and vandals and Mayor Lightfoot. She, and all of our beautiful big cities across this great country, needs our prayers.

We have a second “shady.”

The Shadies need to simply stay home and mind the hearth. Or else you get monsters like 1st Shady Hillary Clinton who was unelected, yet usurped presidential power every day.

Ever since 1st shady Clinton,the 1st and 2nd shadies have been encouraged to usurp their husbands. The liberal fascist lying press caterwauls about apparent cracks in their relationships , hoping for a presidential cuckhold.

Send them home, and keep them out of politics, working quietly for charity.

Tying ones apron strings to a cause may be OK in one instance, yet the left exploits it and says, why did she not help the black man walking for BLM ? Then the shadies are morally bound to walk for the left as well as the right, stabbing their husbands in the back as much as possible in an apparent continuous act of rebellious indignity. Wow.

1st and 2nd Shadies? get the to a nunnery. It is an ill time for manifestation of discontent or virtue signaling when children and police are being shot in our cities.