On the wind-whipped hills north of Haiti's capital, Port-au-Prince, Berthenid Dasny holds the keys to the gated memorial erected for Haiti's earthquake victims. Thousands of bodies are buried here in a mass grave dug after a magnitude 7 earthquake shook the country on Jan. 12, 2010.

"They've forgotten about this place; it should look better than this," Dasny says as she walks past the overgrown grass, rusted metal statues and brittle brush. For the past year, she has been the memorial's groundskeeper, though she has never been paid.

"You must remember the humans buried here. They were just like us and should always be honored, not forgotten," she says. Dasny believes some of her own relatives who were never found after the quake are buried in the grave.

The earthquake's main shock lasted almost 30 seconds. A series of aftershocks soon followed. An estimated 220,000 died, though Haiti's official estimates are higher. Some 1.5 million people were displaced, according to the International Organization for Migration. About 300,000 were injured, and large parts of the country were buried under tons of twisted metal and concrete.

Donors from around the world swiftly pledged billions of dollars in aid and made promises to rebuild. But a decade on, Haitians who survived say they feel forgotten, as much of the goodwill and billions have been lost to waste, greed and corruption.

Elizabonne Casseus, 50, is trying to keep her family afloat. She lives with 17 relatives in a small shelter in Canaan, a slum north of Port-au-Prince inhabited by displaced earthquake survivors. Today, the sprawling array of concrete homes and wooden shacks is home to more than a quarter of a million people. There is no running water; there are no sewers and few roads.

Her flimsy one-room shack is covered with a gray tarp, stamped with logos of the U.S. Agency for International Development. She bought the cover before coming to these windy hills after spending five years in a squalid tent camp near downtown Port-au-Prince. She had hoped the foreign aid would help her repair her home, destroyed in the quake.

Haiti has long been the Western Hemisphere's poorest nation, and the earthquake only made things worse. In the first year after the quake, the economy contracted by more than 5 %.

Moved by the grisly images of the death and destruction, nations around the world pledged almost $10 billion to Haiti. In addition, $3 billion more was donated to worldwide charities that sent thousands of volunteers to the island. Promises were made for new roads, schools, government buildings and permanent, earthquake-proof housing. Haiti's long-troubled economy was going to be revitalized.

While millions poured into Haiti in the first two years after the quake, giving the economy a boost, signs were emerging that reconstruction wouldn't live up to those promises.

"There were so many opportunities after the earthquake that could have reduced so much poverty," says Kesner Pharel, a Haitian economist. He calls the last 10 years a "lost decade."

By 2012, millions of cubic feet of rubble still filled the streets. More than 500,000 people still lived in squalid tent camps, according to the International Organization for Migration.

High-profile groups created to help coordinate the flow of aid money stopped operating. The Interim Haiti Recovery Commission, set up to streamline and provide transparency for major aid projects and co-chaired by former President Bill Clinton, had already disbanded by the fall of 2011, and less than half of the $4.6 billion pledged to projects was spent.

A 2013 Government Accountability Office investigation found that USAID had underestimated the cost of infrastructure and housing projects, forcing it to substantially reduce the number of homes it originally planned to help build. The GAO also found that most USAID contracts went to non-Haitian companies, leaving local businesses out of any reconstruction boon.

And an NPR investigation five years after the quake found that the American Red Cross, which took in half a billion dollars from U.S. donors, had only built six permanent homes, not the 132,000 it had claimed. The Red Cross disputed NPR's reports and objected to findings of opaque bookkeeping and exorbitant overhead costs.

Economist Pharel says that on top of the botched reconstruction effort, Haiti's constant political turmoil, weak institutions and poor governance squandered international funds and goodwill. The United Nations has struggled in recent years to get donors to fulfill their aid commitments. Last year, it only met 30% of its funding goals to Haiti, according to the U.N.

In recent months, though, citizens have been demanding more accountability from their leaders, not only for the earthquake aid but also for billions of dollars provided to Haiti from an aid program sponsored by Venezuela, known as PetroCaribe. Opponents of Haitian President Jovenel Moïse accuse him of embezzling some of the PetroCaribe funds, and they've taken to the streets demanding he resign. Moïse denies all allegations.

This fall, demonstrations turned violent, leaving 50 people dead and more than 100 injured. Schools and businesses were shut down for weeks. Critical food aid, especially outside the capital, couldn't reach much of the population as demonstrators blocked highways and roads. About a million Haitians suffer severe hunger. Human rights advocates say gangs have grown in the midst of the political turmoil.

But many Haitians are no longer waiting for government or aid groups to build them more permanent homes. Casseus, who relocated to the sprawling slum outside Port-au-Prince, buys sand and stone whenever she has a little extra money so that one day, she can build a more permanent structure on the land she bought.

She admits it is slow going for her and her husband, a car mechanic. "Sometimes he goes out all day long and comes back with no money," she says.

Dasny, the earthquake memorial's groundskeeper, also hopes for a better place to live. For now, she has cobbled together a two-room house on the dusty hillside where she lives by the mass grave. It is made of wooden slats and corrugated tin that rattles and roars with every gust of wind.

Like Casseus, she keeps a large pile of stone and sand outside her door. When she has work or sells one of her goats, she uses the money to buy stones. She breaks the rocks and adds to the piles, getting ever closer to her goal of building a new home. 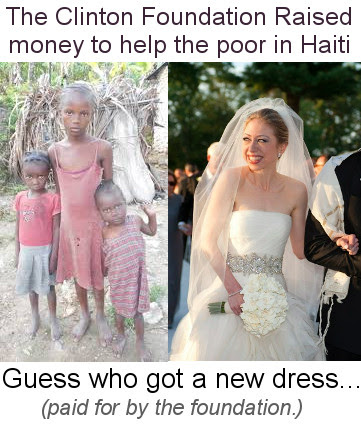 12 Jan: Page Six: Canadian billionaire Frank Giustra providing luxe hideout for Prince Harry, Meghan Markle
By Emily Smith and Oli Coleman
Prince Harry and Meghan Markle have been hiding out at the home of Canadian billionaire Frank Giustra, whose close ties to the Clintons have created international controversy, Page Six can exclusively reveal.
Harry and Meghan refused to reveal the owner of the multi-million dollar waterfront mansion near Victoria, British Columbia — the place where they plotted their shock exit from the royal family...

In 2005, he and President Bill Clinton traveled together to Kazakhstan to meet with the former Soviet republic’s authoritarian leader. Days later, Giustra acquired shares in three of the country’s state-run uranium mines — a venture valued at more than $3 billion. Months after the Kazakh pact, Giustra reportedly gave a $31.3 million donation to the Clinton Foundation and has since publicly pledged he’ll donate another $100 million.
Both Giustra and Clinton have denied the former US president helped him cement the Kazakh deal, and Giustra later divested himself of the assets.

Then in 2016, as Hillary Clinton was running for president, the leaked e-mails of her campaign chairman, John Podesta, revealed that Giustra and Mexican billionaire Carlos Slim gave an endowment of $20 million in 2010 to the Clinton Foundation to set up the for-profit Haiti Development Fund, intended to give seed money to Haitian entrepreneurs after the devastating earthquake. Yet there is “almost nothing in the public record” showing what happened to the millions of dollars, according to reports at the time...

Meghan and Harry’s publicist, Sara Latham, is a former Hillary Clinton aide.
But sources told Page Six that the royal couple’s access to the mansion was set up through famed music producer David Foster, not Latham...
On Thursday, Meghan flew back to the waterfront bolt-hole to join baby Archie, who was under the care of a nanny, following a trip to London earlier in the week...
https://pagesix.com/2020/01/12/canadian-billionaire-frank-giustra-providing-luxe-hideout-for-prince-harry-meghan-markle/?_ga=2.238038528.1080799160.1578882712-4717958.1529453319

Haitians just can’t cut a break.. I’m thinking they should lose Voodoo as the national religion. Kniw what I mean.. Just saying.

Haiti has been struggling to recover since the founding of Haiti in 1804!

Haiti seems incapable of getting leaders who can take and keep it out of extreme poverty. Haiti has at least One Ton of gold in it’s earth, along with other precious metals.

Such a country is just the sort to get the attention of the Chinese. Due to their proximity to the USA, one may expect America to develop that area, but the amount of chronic infighting and crooked politicians on this island makes this place a poor investment at least thus far.

That seems sadly true. At a certain point you need to stand up & rebuild your own country. You aren’t children. It takes sweat & hard work. Where is that?

DM says they can’t confirm Giustra is the owner. best to read for why there is secrecy & confusion:

13 Jan: Daily Mail: Canadian billionaire ‘who lent Harry and Meghan $14m holiday mansion’: Frank Giustra who co-founded top Hollywood movie studio Lionsgate and has controversial ties to Clintons is named as owner of lavish retreat
By Lauren Fruen and Josh Boswell
Ownership by Giustra would be at odds with what DailyMail.com was told by a realtor involved in the 2014 sale of the home. That person, who had to sign a non disclosure agreement, said it was bought by a billionaire who is neither Canadian nor or American for $18 million CAD - $14 million...
https://www.dailymail.co.uk/news/article-7879153/Mystery-billionaire-let-Harry-Meghan-stay-mansion-Canada-named-Clinton-donor.html

Most of the aid was taken by aid agencies, then by the Haitian government.
The food aid contracts went to the Clinton Foundation.
Clinton Foundation got the rights to the gold mining in Haiti.
Haitians living in Florida campaigned for Trump because of this.

The Clinton Foundation effectively owns much of Haiti.

The MSM will not have their investigative journalists look into this.

11 posted on 01/12/2020 6:53:50 PM PST by Widget Jr
[ Post Reply | Private Reply | To 1 | View Replies]
To: lee martell
but the amount of chronic infighting and crooked politicians on this island makes this place a poor investment at least thus far.

It's only been 200 years. How do you know things won't suddenly turn around?

She would have looked better with a garbage bag over her head to hide her face.

Do not hear any wailing from the DR.

And yet on the same island is the Dominican Republic which has “economic growth....7 percent in 2018, fueled by robust domestic demand. It was the fastest-growing LAC economy over that five-year period.”

I read they had a strong border presence to keep Haitians out.

Yes, Haiti is the poster child for 4th world ****holes.

You could dump the entire GDP of Canada for an entire DECADE into Haiti, and it would just swirl down the toilet, never to be seen again, and ordinary folks in Haiti would still eat, sleep and s**t in the street. Certain countries are classed as “economic basket cases” for a reason.

You can’t have recovery in a nation that was essentially stillborn.

You just never know;
Haiti could turn into the Las Vegas of the Caribbean.
You’ll have a ball!
Just bring your own water, food, gas, electrical generators, matches, umbrellas Oh, and medications too!

1) Move all the people to the Congo. French speakers. 2) Give the whole island to the Dominican Republic. Repopulate Haiti with all the Puerto Ricans at Rikers Island.

What are the Puerto Ricans going to do for women?
The Haitians may not want somebody moving in on “their territory!”//