Based on the book by Chuck Palahniuk, Fight Club is an important and affecting examination of reality in the 20th century... It explores the downfall of masculinity and shift into post-industrial capitalism.

Jack is a skinny man working a dead-end job in an unnamed office...The film presents him as one of thousands of men convinced they are little more than lower/middle class workers. Jack obsession with cleanliness and style diverts him away from desire. His obsession with IKEA furniture subverts the idea of masculinity.

The film establishes Jack’s bond with similarly depressed individuals. Convinced he is sick, he visits group therapy sessions for varying diseases and conditions. The patients, including Bob, represent the men who have lost their masculinity. Whereas Jack lost his masculinity to existential crisis and submissiveness, Bob had his masculinity taken away by disease.

Whereas Jack has accepted his place in society, Durden strives to break the bonds of establishment. Jack is a man who has all but given up on changing the world. When his house his blown up, the material possessions he holds dear are taken away. This incident releases him from conventions and rules. Here, Jack is relating to his masculine side after being exposed to his feminine side (Marla) for an extended period of time.

Durden allows Jack to see beyond the shrinking walls of his office cubicle. Jack and Durden analyse the societal problems stemming from commercialism. Every news story, advertisement, and product is designed to make men into people who fit in, rather than allowing them to embrace their masculinity. Durden believes that fight club’s existence will allow men to embrace their wildest fantasies and become autonomous individuals. By becoming a patriarchal figure for all those involved to worship, Durden becomes a symbol of hope for hard-working and mistreated men.

TOPICS: TV/Movies
KEYWORDS: fightclub; masculinity; millenials; redpill; sjw
“In the transformation from “Fight Club” to “Project Mayhem”, the members merely shift their anger from each other to the outside world- the soul-deadening culture that has merged new age spirituality with consumerism, hiding dehumanization behind politically correct calm.” (Morgan. 2009) 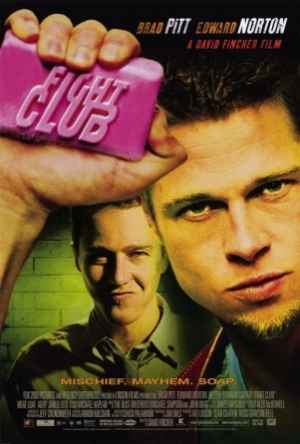 “You are not special. You’re not a beautiful and unique snowflake.” - Tyler Durden

The author clearly never studied the work itself, for he broke the first rule...

“The things you own end up owning you. It’s only after you lose everything that you’re free to do anything.”

I love fight club but it’s message was slightly before it’s time, or perhaps it helped to spur the current movement we have of beta’s who blame the world for being so somehow dysfunctional for them. While I always felt it’s anti-corporate anarchist message was distasteful to me, it is no ironic contradiction that an ineffectual would adopt a split personality that overcompensates for his emasculation, and once that got out of his control, desire to tear down that whole mean paternal symbol that is modern western civilization.

I did not care for this film at all.

“The things you own end up owning you. It’s only after you lose everything that you’re free to do anything.”

Actually that sounds kinda’ pussy. ‘Can’t make a move if you’ve got something to lose. Bet guys like Trump never bought into it.

"I did not care for this film at all."

Agree with all of the above. The article is not perfect and neither is the movie...But examining its themes is timelier and more essential than ever.

It's worth noting that when the movie first came out, its box office reception suffered as it coincided with the news of the Columbine High School shootings in Littleton, Colorado. People were turned off by the violent content. The film grew in popularity and cult status upon its video/DVD release.

Looking back on that fact now post-Columbine. Post-9/11... I find the timing especially pertinent given the era they ushered in and the impact they have had on our collective psyche.

Lest we grow complacent with the epidemics of youth violence, suicide, and opioid overdoses wreaking havoc within our country -- 'Fight Club' offers some worthwhile insight into the sources of our current predicament -- the general state of dissatisfaction and spiritual malaise affecting our country...especially our men.

I’ll have to borrow a copy from my grown offspring and check it out.