A man who was part of Saray Khumalo’s Mount Everest climbing team has died.

Indian national Ravi Thakar was found dead on Friday morning after reaching the peak of the highest mountain in the world on Thursday.

It’s being reported that Thakar was found dead inside his tent on Friday morning, but details surrounding the cause of his death were not yet known.

Thakar and Irish Professor Seamus Lawless, who is missing, were among team members who reached the peak of the mountain on Thursday together with Khumalo, who became the first black African woman to achieve such a feat.

The search and rescue operation on Mount Everest for 40-year-old Lawless was called off on Friday.

The Irish professor has been missing since Thursday after he reportedly fell during the descent with Khumalo.

Rescuers took the decision to call off the search for Lawless due to high winds and chilly temperatures of -27 degrees.

Lawless reportedly fell from an altitude of 8,300 metres on Thursday.

He was attempting the climb to raise money for a charity dedicated to helping seriously ill children and their families.

Despite the emotional pain of losing their fellow climbers, Khumalo and her five other teammates must now continue with the dangerous journey down Mount Everest. Despite the emotional pain of losing their fellow climbers, Khumalo and her five other teammates must now continue with the dangerous journey down Mount Everest.

Duh, pack it in, pack it out. Drag your corpses with you. 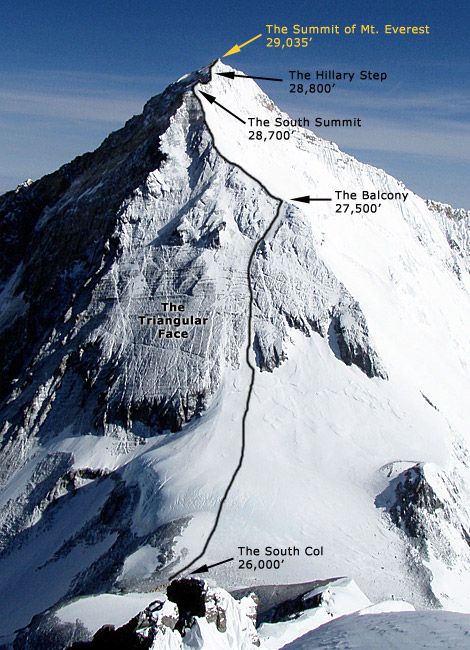 All in all, it’s something I won’t do but since the 1996 tragedy, I’ve been fascinated with the yearly summit attempts in May. I calculated that there is a 5% death rate for all people getting permits to climb Everest. I also understand that it’s not THAT tough of a climb technically (relative to other mountains, though Everest sports the Dead Zone and other fun features) and for $60,000-$100,000 you can have a guide and a Sherpa help you do it.

Sort of What I was referring to. Let alone the hundreds of tons of trash.

Did the narcissistic bitch with a fat NGO sponsor back in RSA haul all of her trash off the mountain - including the two poor dead bastards in her ‘entourage’? Gag me with a spoon. Oooooh, isn’t she pwiddy with her liddle ice axe?

10 posted on 05/19/2019 4:13:17 AM PDT by Bedford Forrest (Roger, Contact, Judy, Out. Fox One. Splash one.)
[ Post Reply | Private Reply | To 2 | View Replies]
To: DoodleBob
It's not a technical climb. There are fixed ropes almost the whole way, especially on the South Face. There are ladders over the crevasses and surmounting the steeper sections. And you're following a route literally hundreds of people have already traversed.

That said, it is one of the toughest exercises on earth. The weather is unpredictable, the altitude reaches into the jet stream and the winds are correspondingly fierce, there is a constant threat of avalanches, hypoxia, and killing frostbite, as well as pulmonary and cerebral edema.

It is not for the faint of heart.

That said, it is one of the toughest exercises on earth. The weather is unpredictable, the altitude reaches into the jet stream and the winds are correspondingly fierce, there is a constant threat of avalanches, hypoxia, and killing frostbite, as well as pulmonary and cerebral edema.

It is not for the faint of heart.

14 posted on 05/19/2019 5:15:22 AM PDT by Flick Lives
[ Post Reply | Private Reply | To 11 | View Replies]
To: Flick Lives
Jon Krakauer's story of the disastrous 1996 season. Yes, I've read it. In fact, I've read several books about Everest, and watched every documentary I could find on it. At one time, for a very fleeting moment, I considered trying it. I didn't have a spare $100K lying around for one, and my death wish has retreated with my advancing years. So I bagged it.

I do know several folks who have made the trek to the South base camp, and they say that in itself is a workout.

If you're interested in the truth behind the scenes, read the tale of Beck Weathers or Lincoln Hall. Or David Sharp. That mountain is merciless.

As I get older the, “Because it’s there” reason to climb mountains doesn’t have the same appeal it did when I was 20. Some things are best left alone.

The first rule of search and rescue is to not put yourself at risk.

Every single one who heads up that mountain knows the risk and that they might never come back down off of the mountain.

Those who have gone up for recovery efforts have perished, too - including those who are hired (Sherpas) to clean up the trash and rubbish - so you expect someone to bring down a hiking buddy at the risk of their own life?

I'd prefer the rubbish deposit at $15K per person since it's pretty bad up on the mountain, even if the clean-up efforts are ongoing and helping some. But expecting others to be their brother's keeper risking their own life to have a high moral ground is ridiculous at best.

I love the off the cuff comments RF generates sometimes.

There is a reason Everest has hundreds of frozen dead bodies left on the mountain.

Try and pull them down and you join the list of frozen dead bodies left behind...

Very dangerous to be climbing with a weaker climber - especially one attempting an historic first. Once you step foot above base camp, and especially above camp 3, you have to be totally focused on your own safety and survival. Any help given to a weaker climber such as lending precious oxygen or delaying your descent can be fatal.

To your point, though, "TS about the guy who died; leave him there with the trash and let the Sherpas clean it all up."?

That must be what they're thinking.