My Leftist friends (as well as many ardent #Never Trumpers) constantly ask me if I'm not bothered by Donald Trump's lack of decorum.

They ask if I don't think his tweets are "beneath the dignity of the office." Here's my answer: We Right-thinking people have tried dignity. There could not have been a man of more quiet dignity than George W. Bush as he suffered the outrageous lies and politically motivated hatreds that undermined his presidency. We tried statesmanship.

Could there be another human being on this earth who so desperately prized "collegiality" as John McCain? We tried propriety has there been a nicer human being ever than Mitt Romney? And the results were always the same.

This is because, while we were playing by the rules of dignity, collegiality and propriety, the Left has been, for the past 60 years, engaged in a knife fight where the only rules are those of Saul Alinsky and the Chicago mob.

I don't find anything "dignified," "collegial" or "proper" about Barack Obama's lying about what went down on the streets of Ferguson in order to ramp up racial hatreds because racial hatreds serve the Democratic Party.

TOPICS: Chit/Chat
KEYWORDS: america; conservatives; democrats; djt; donaldtrump; evansayet; ferguson; georgewbush; hillary; hillaryclinton; johnmccain; keepontrumpin; left; leftest; liberals; maga; mittromney; nevertrumpers; obama; progressives; right; saulalinsky; trump; trumptweets; twitter
A friend sent this to me a couple of days ago. I was surprised to fine that this was a blog from the Liberal Forum.org. I've never been there until a few minutes ago and they're insane. This must have put them over the top. But this was written by Evan Sayet...
1 posted on 01/02/2018 7:59:24 PM PST by Beave Meister
[ Post Reply | Private Reply | View Replies]
To: Beave Meister
My Leftist friends

Why does this guy have leftist friends?

Most notably, it seems to leap right from this piece from Mr. Schlichter, written last February:

The Left is getting massively out-Alinskyed, and the hilarious thing is that this band of withered hippies, unemployable millennial safe-space cases, and unlovable + unshaven libfeminists don’t even know it.

The Leftist mafia godmaleidentifyingparents pulling the strings of the Marxist Muppets know the score – they are losing. And it’s awesome. Because, finally, the Right has taken Saul Alinsky’s Rules for Radicals and shoved it up where #TheResistance don’t shine.

... Trump is clearly willing to use all his powers to beat the living liberalism out of our enemy. Wait, this is where the Fredocons loosen their bow ties and stutter, “Why…we can’t…Professor Wellington Wimpenheimer IV would not approve…it’s so mean…oh, well I never!”

Wake up. Man up. If you ever want to win (and maybe someday even kiss a girl) you need to get real. They hate us, and we either win or we spend the rest of our miserable lives as Boxer the Horse, slaving away to fund the welfare state under the lash of the Left until it decides it’s time to pack us off to the glue factory.

Thank you, Andrew Breitbart. You yelled “Follow me!” and led a movement that had previously been dominated by doofy wonks and bow-tied geeks over the top in a glorious bayonet charge against the paper tiger liberal elite.

It's worth noting that the post on the lefty site got less than 10 comments, while the reposting on FR got almost 100 comments, featuring a reference by chajin of Patton's quote.

Best. Election. EVER. Thanks again for the posting.

I was going to quote a few of the parts I like but then I realized I’d have to repeat almost all of the article.

with Trump, conservatives have leadership every bit as ruthless and devious as FRoosevelt or Johnson.

Trump knows to reward your friends, and punish your enemies (eg. the tax bill).

Rather than clueless “good gov’t” Republicanism of “not picking winners” and not rewarding “special interests”.

This guy is writing what I have been thinking. Trump is fighting the bullies on every front and winning.

You are correct Beave. I am tired of the Democrats using our values against us. I no longer wanted to be taken advantage of. I wanted a President who would take his gloves off, and fight for the people & the country. Mr. Trump was perfect for the job and supported the issues I did.

Now, I have come to see President Trump’s great heart and learned how wise and very savvy he is over the past year. Melania, our FLOTUS, is an absolute treasure and compliments him perfectly. I am very proud of him and our country. Just like he said I would be.

I'm just starting to break out in a BIG smile. I love this guy.

P.O.T.U.S. Trump take no prisoners, when battling the left.:-)

No one else could have duplicated what he has accomplished so far, and that includes getting the nomination and getting elected in the first place against all odds.

Name me any other candidate who could have pulled this one out of the hat. Who? No one you say?

Yes, that's correct. No one would have been up to the task we have elected Donald Trump to do.

And he's doing a magnificent job of it. 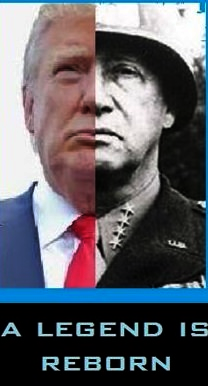 Maybe he wasn’t always a conservative, and has a few old friends who continue to accept him, inspite of his newer opinions.

13 posted on 01/03/2018 1:05:26 AM PST by Rumplemeyer (The GOP should stand its ground - and fix Bayonets)
[ Post Reply | Private Reply | To 1 | View Replies]
To: Beave Meister
Could there be another human being on this earth who so desperately prized "collegiality" as John McCain? We tried propriety has there been a nicer human being ever than Mitt Romney? And the results were always the same.

I've seen this in an email before. A couple of times actually. It has been going around for quite a while now I guess.

These things the author said about McLame and Mittens are just plain wrong. Maybe not 100% wrong but enough the words, "collegiate" and "nice", should not be used when describing either one. Of the two, I don't think Mitt is evil or bad per se, just wrongheaded for the most part. A RINO even if he doesn't mean to be. A GOPe member in excellent standing so not good for the right in general or the republican party.

I have them and a brother and sister to the left of Bernie. I guess I was the white sheep of the family.

Trump is simply returning fire with the EXACT SAME TACTICS the Democrat Left has used on us for decades.