The meeting between Attorney General Loretta Lynch and former President Bill Clinton might not have been known if not for a local reporter who received a tip about it.

Sign explained that he received a tip from a "trusted source" about the meeting and then met with management at the station.

"Naturally my jaw dropped," he recalled.

The meeting took place on a private tarmac at Phoenix's Sky Harbor International Airport, near where private aircraft take off and land.

Sign said that a second source confirmed the information and they then asked Lynch about it at a news conference Wednesday.

Lynch maintained that she did not discuss the investigation into Hillary Clinton's private email server or any other "cases" and that the former president didn't bring it up.

Before leaving the city, Mr. Clinton apparently waited at the airport Monday night for Lynch to arrive, then boarded her plane for a 30-minute conversation.

"The FBI there on the tarmac instructed everybody: no photos, no pictures, no cell phones," Sign explained. 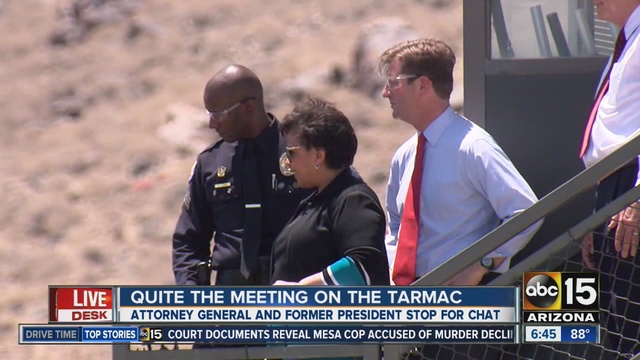 Aw, give them a break as they just talked about grand kids and golf.

I didn’t realize it at the time, but it looks more and more like that anonymous Phoenix police officer is a national hero.

The only bombshell is that the criminal media couldn’t be bothered to look into this sordid affair any further.

What is the record of flight plans filed with the FAA and how and when were those flight plans altered or changed or were when were both filed by the pilots and or charter?

Who was in contact with the FBI and when did they know this meeting was going to take place?

Who told Bill Clinton the itinerary of the AG and did they both have legitimate reasons for being there in that City at that time?

How far in advance where both scheduled to be at the airport?

There are many questions not answered about how this meeting came about and who coordinated it to happen! There is a smoking gun somewhere in the records and the Clintons wanted to pressure, threaten, cajole, or influence the AG and that is what this meeting was for!

Impressive. That’s what investigative reporting is really about.

I’m surprised he’s still alive. Especially after today’s mysterious “suicide” by botched stabbing of a surgeon in NYC who had volunteered in Haiti and then complained about the corruption and the fact that almost none of the money the Clinton Foundation collected, supposedly for Haiti, ever made it to Haiti.

Mike Tyson can add this latest “suicide” to his monologue.

Exactly, or at least not the subject of harassment, etc. The FBI was really pissed about the leak.

“The FBI there on the tarmac instructed everybody: no photos, no pictures, no cell phones,” Sign explained.

Illegal as hell the FBI does not have authority to forbid Photography in a public area.

Heck hasn’t this happened to all of us? You go somewhere and see someone you know and stop and chat???? Their private planes just happened to be parked next to each other, similar to how you park your car next to your neighbor at your shopping center.

We aren’t supposed to question the Clintons........it was just a coincidence that they were both in Phoenix on the same day.

He’s lucky to still be alive.

Hey, it was just about the grandkids and how things were going in Chappiqua. Seriously.

I crack me up.

Don’t worry, he’ll probably suicide like the NY doctor who stabbed himself in the chest yesterday...an obvious suicide. He was the doctor whoi was working in haiti who confronted the clintoons about their “foundation”’s ripoff in haiti.

did anyone ever identify which FBI agents gave the orders not to film, photograph, etc?

Nah, no problem. Loretta just intended to drive past Bill’s plane and ask for a bottle of Gray Poopedon salad droppings.

He stabbed himself in the chest 5 days ago. What a strange way to commit suicide.

We definitely need to hit the reset button in this country. The sheer level of unabashed corruption is beyond belief. If this reporter had been a part of the mainstream media we never would never heard of it. An honest and unbiased media would go along ways in limiting the now rampant corruption. Anyone with a room temperature iq could see through the real purpose of that meeting.