The first hysterical report about this from Politico this afternoon set off an earthquake among media Twitter. The original tweet:

!!!!! Trump told senators he is open to Gang of 8 immigration bill, per Manchin. Lamar brought it up during meeting and need for reform

“Open” sounds very bad indeed, enough so for Trump superfan Ann Coulter to quip, “I wish he’d go back to attacking Nordstrom.” Then came this clarification from the White House:

White House says Manchin brought up Gang, Trump told him it was fine for them to get together. Says POTUS did not say he was open to bill. https://t.co/LtrXQxPwBk

That makes it sound like Trump wasn’t so much encouraging them as humoring them. I.e. if the Senate wants to put a comprehensive deal together, he’d be happy to review it as a courtesy — but he’s making no promises. NBC’s understanding of the exchange makes it sound that way also:

Sure, write up a bill, send it over to Reince, we’ll give it a look-see. Maybe the White House can use it as a jumping-off point for some more limited deal, like funding for the border wall in exchange for amnesty for DREAMers.

But then came this further bulletin from NBC, which made border hawks anxious again:

Sen. Manchin said he tried to explain path to legalization."That doesn't like amnesty to me," Trump said (in Manchin's telling)

“That doesn’t sound like amnesty to me”? Er, well, depending on how Manchin explained the plan, it’s *possible* that a new comprehensive immigration bill would be stronger than the Gang of Eight. The key flaw in that bill, remember, was that it granted illegals probationary legalization without guaranteeing concrete improvements in enforcement first. If that flaw is corrected such that Trump gets the wall and E-Verify and more Border Patrol, say, and only when those things are in place do illegals get any form of legal status, that might be a deal worth considering. (For some border hawks, I mean. For others, amnesty is a dealbreaker no matter how many enforcement concessions are made.) Schumer and most Democrats are unlikely to agree to any “enforcement first” comprehensive deal, fearing that the GOP will back out of the amnesty part of it even if all the enforcement measures they’re asking for are implemented, but Schumer may not be able to prevent a dam break here. Red-state Democrats like Manchin who are up for reelection in 2018 might find a comprehensive bill that’s heavy on border security quite attractive, as it would give them some cred with Republicans back home and would let them boast to liberals in their own party that they finally got the GOP to agree to some form of legalization for illegals. It may very well be that what Manchin proposed didn’t sound like a traditional amnesty, where illegals get their new status up front while the right is made to wait on border improvements — again.

But … it also may not be. Maybe Manchin ran through the Gang of Eight bill with him and Trump really did sound like he’d consider it. I can’t believe Bannon or Miller would let that happen, but I’ve always thought Trump was well positioned for a more limited deal involving DREAMers. Could be he’s open to amnesty for adults too if the price is right. Here’s what happened in Manchin’s own words, per NBC: 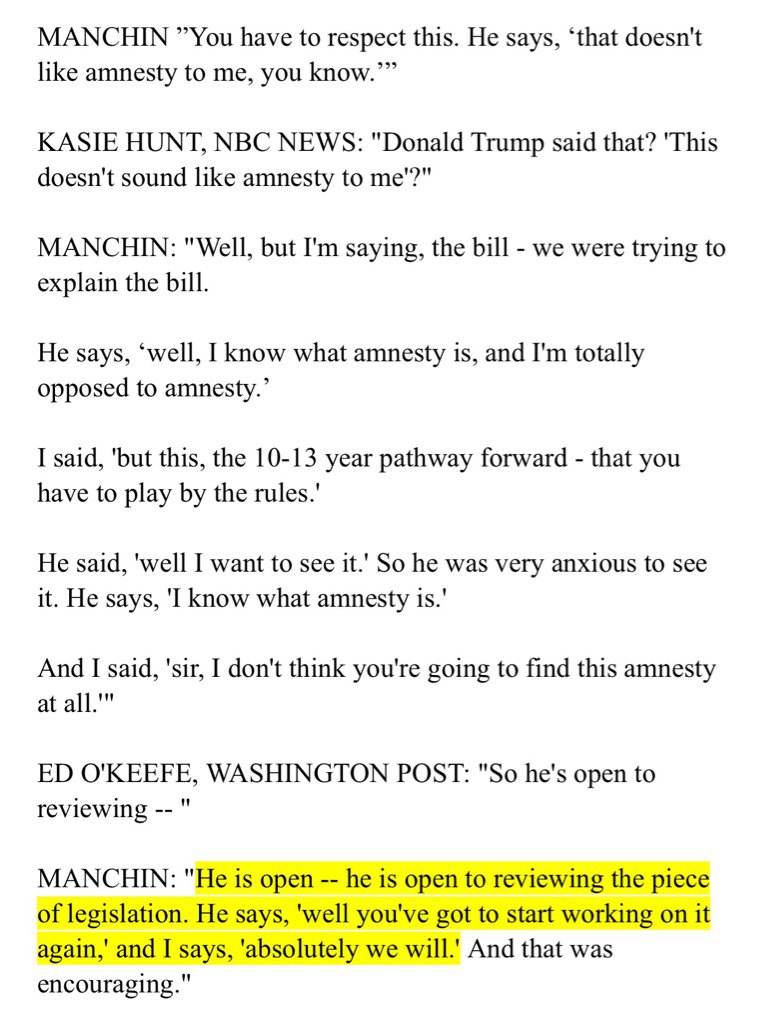 There are a lot of things he could have said there — no path to citizenship, ever; no comprehensive deals, ever; enforcement first, then we’ll talk about legalization separately. Instead all he said, according to Manchin, was that they should get to work on it and he’ll review it. Not a disaster, but not terrific. Amnesty ain’t licked yet.

Speaking of which, via CNN, here’s Steve King still wondering why DACA wasn’t rescinded on day one by executive order. By one estimate, more than 14,000 DREAMers have had their amnesty under Obama’s executive order extended during the 20 days of the Trump administration.

Trump says he wants to discuss the immigration issue and this becomes an endorsement of Soros-type policies.

Bastards, damn them all to hell.

The media is completely retarded. Luis had this to say to the Republicans he despises.

(waiting for hysterical laugher to die down)

La Raza President, and chief America hater, Janet Murguia, told attendees that it sickened her to hear Americans chanting "USA." She accused Murietta, Cali protesters against border-jumpers of having "cloaked their hatred in patriotism" by shouting "'USA! USA!' again and again."

Murguia demanded amnesty and said the road to the White House for Republicans goes through the Latino community and La Raza. She also said Republicans who want to rescind the Deferred Action for Childhood Arrivals (DACA) program will not get Hispanic votes.

AMNESTY-LOVING DEMOCRATS DROWN IN A SEA OF RED

2014 was a tsunami that submerged AMNESTY-SUCKING DEMOCRATS in waves of defeat. Democrats who ran on amnesty were soundly defeated.

I guess La Raza Luis is drowning his sorrows over the Trump win in tequila shots.

Trump WH has already stated this story is a lie .

WH already said Trump says no to gang of crap

Yup. I would worry about things like this, but then I remember that his closest advisors are Bannon and Miller. No way will he go soft.

DACA is still operating just as it did when Obama invented it.

So far they are only committing to deport those illegal aliens who have been convicted of violent crimes, that leaves quite a few million here.

Assuming Trump gets very firm, very fast about enforcing laws already in place, there’s no harm in talking about those immigration reforms. Our main concern was that the enforcement parts of any laws would NEVER happen. While they’re talking, President Trump and his team can get a lot accomplished about reversing the invasion of the US.

13 posted on 02/09/2017 4:23:51 PM PST by grania
[ Post Reply | Private Reply | To 1 | View Replies]
To: Lurkinanloomin
I think that DACA is not a priority. It gives the leftists good optics for the news shows if 12 year olds and 18 year olds are dragged out of classrooms and sent home. Priority one are the criminals and terrorists. Priority two are the ones who are drags on the economy, the welfare people and those who take jobs from Americans. Many of those two classes of illegals will take DACA kids home with them.

Once we have cleared out a few million, and the economy is humming and approval ratings are good, and Soros is in jail and ISIS is defeated, we can turn our attention to undoing some of the other things that Obama did to us, including DACA.

First - I don’t share many of the negative and nasty opinions of illegals that I frequently see posted here. I’m surrounded by them here in Texas and while many are sullen and angry (for various reasons good and bad) the vast majority are hard working and far nicer to be around than American liberals.

However, I am old enough to remember the first time we did amnesty under Reagan. We were told “just this once and it will never happen again”.

Well it better not happen again. No amnesty - never again.

I’m in favor of granting certain dreamers resident alien status - as long as it never leads to citizenship, unless they marry an American or serve 20 in the US armed forces.