...among the top 10 breakthroughs was the realization, made public in October, 2014, by scientists that cave paintings discovered in 7 cave sites in the Maros karsts on the island of Sulawesi in Indonesia were actually between 35,000 and 40,000 years old. The breakthrough was significant in that it was the first time that prehistoric human cave painting art found in Indonesia, or East Asia, for that matter, was found to date during time periods usually associated with the "first cave painter" works long known to exist in Europe.

In the potential landmark study, the researchers used uranium-series dating of speleothem samples directly associated with 12 human hand stencils and two figurative animal paintings. "The earliest dated image from Maros," write the study authors in their report, "with a minimum age of 39.9 kyr, is now the oldest known hand stencil in the world. In addition, a painting of a babirusa ("pig-deer") made at least 35.4 kyr ago is among the earliest dated figurative depictions worldwide, if not the earliest one"*

The study findings dispel the notion that such early cave painting is unique to Europe or that the first prehistoric artists were European by location. Moreover, it suggests the possibility of an even more ancient common or shared ancestral population of human cave painters, perhaps pointing to an original population, or populations, first emerging out of Africa before about 40,000 BCE. Alternatively, it could suggest that these cognitive abilities evolved independently around the same time period among humans in locations thousands of miles apart.

Animal depiction and hand stencil paintings found in one of the caves at Sulawesi. This is a video still shot from video shown below from Nature.com 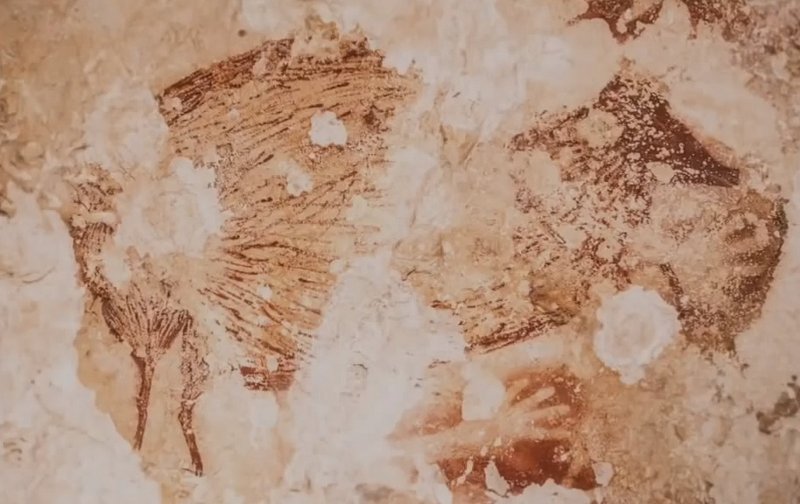 I can just hear the mother yelling don’t paint on the walls.

That is a truly remarkable find.

Kids were kids, even in the Stone Age.