Dos Equis Beer created a promotional character touted as “The Most Interesting Man in the World.” While he certainly has some fascinating attributes, Greyhound owners might be able to give him a run for his money.

Dos Equis Beer created a promotional character touted as “The Most Interesting Man in the World.” While he certainly has some fascinating attributes, Greyhound owners might be able to give him a run for his money.

Look around at all the dogs in your neighborhood or at the dog park. Are you the only one with a Greyhound? Owning an ex-racing Greyhound puts you in a small, cozy group of ownership, making you an elite member of an exclusive club.

Your neighbors will instantly identify you as “those neighbors with the Greyhound” instead of “I don’t know if I know those folks.”

If you are a man taking your Greyhound for a walk, you will suddenly discover an abundance of single ladies you never knew existed in your area. They will appear every day to be taking their walk when you do.

A 20-minute walk becomes a 30-45 minute event. Pack a lunch. You could starve walking your dog as people stop you to ask about your beautiful and unique hound.

If you are shy, the Greyhound will be your “wingman” and if you are outgoing, you will have no shortage of chances to meet people as the Greyhound is a natural conversation starter.

Hopefully you are a fan of “Jeopardy” as bystanders will be mesmerized into asking you millions of questions.

Owning an ex-racing Greyhound evokes the cachet of a time previous when Greyhound ownership was for the extreme rich and instantly projects you as having the “Champagne wishes and caviar dreams” kind of life.

At parties, when Mildred launches into what little Fifi did that was oh-so adorable, you can casually drop that you adopted an ex-elite racing athlete. If Mildred continues, you can also insert into the conversation that by adopting an ex-racing Greyhound, you took it away after their track life was completed and saved them from an uncertain future. No amount of sitting up and begging by Fifi can top this.

So, no disrespect to the Dos Equis Man, but based on the above, perhaps Greyhound owners are “The Most Interesting People in the World.” Now if he were to adopt an ex-racing Greyhound…

He’d actually own a Basenji, and it wouldn’t be impressed with him or greyhounds.

Sorry, I should have started with:

We get more posts with useful info when we get more of the article at FR.

We are on our 3rd Greyhound.

That is a terrible source, and a stupid article.

Greyhounds are way more interesting than that guy.

I can't speak for the Dos Equis man, but from what I've seen, all dogs are fascinated by greyhounds.

Do we know if LAGreyhound owns Examiner.com? 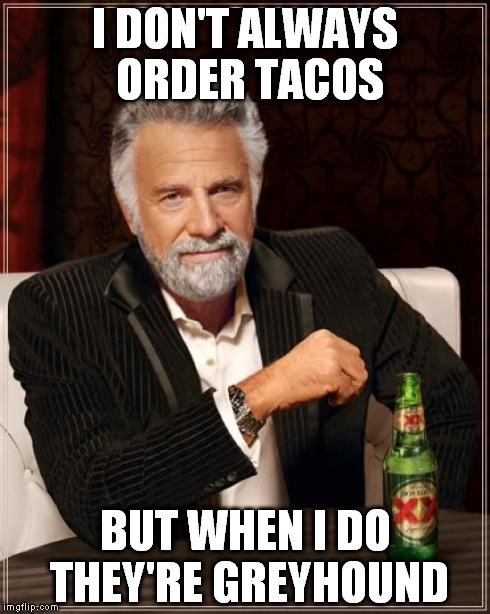 That's the point, if it's not a Basenji, it's just a dog.

11 posted on 09/24/2014 3:27:49 PM PDT by Tijeras_Slim
[ Post Reply | Private Reply | To 9 | View Replies]
To: thackney
A friend of mine in northern Michigan adopted a greyhound and whenever he let it out of the house in the country, it would race around and around the fenced house and yard until it got tired and came back into the house.......LOL!

13 posted on 09/24/2014 3:44:22 PM PDT by Vendome (Don't take life so seriously-you won't live through it anyway-Enjoy Yourself ala Louis Prima)
[ Post Reply | Private Reply | To 1 | View Replies]
To: thackney
As a side note, my prior pheasant hunting trips to a sparsely populated area in NW Kansas were hosted by a farmer/banker who let us stay in his farmhouse.

He had approximately a dozen kenneled greyhounds, one of which was huge and a mix of russian wolfhound and wolf.....

These dogs were bred to hunt coyotes......

He had an old 4/4 toyota pickup where he replaced the rear bed with a flat bed and a 6 dog kennel - 3 dogs on a side with an open window for the dogs to look out and the side being a drop down controlled by a cord leading into the drivers cab.

He'd load the dogs into the kennel then drive the dirt roads and fields looking for coyotes. Once one was spotted, he'd pull the control cord which would drop the sides of the kennel down and then it was off to the races with the dogs in hot pursuit of the coyote....

If the dogs were lucky enough to catch the coyote, then he would go in with either a hammer or rifle to administer the kill...........

I like double x. Not a bad beer as bad beers go.