TOPICS: History
KEYWORDS: milhist; realtime; worldwarii
Free Republic University, Department of History presents World War II Plus 70 Years: Seminar and Discussion Forum
First session: September 1, 2009. Last date to add: September 2, 2015.
Reading assignment: New York Times articles delivered daily to students on the 70th anniversary of original publication date. (Previously posted articles can be found by searching on keyword “realtime” Or view Homer’s posting history .)
To add this class to or drop it from your schedule notify Admissions and Records (Attn: Homer_J_Simpson) by freepmail. Those on the Realtime +/- 70 Years ping list are automatically enrolled. Course description, prerequisites and tuition information is available at the bottom of Homer’s profile. Also visit our general discussion thread.
1 posted on 10/26/2013 4:51:56 AM PDT by Homer_J_Simpson
[ Post Reply | Private Reply | View Replies]
To: Homer_J_Simpson
Selections from West Point Atlas for the Second World War
Soviet Summer and Fall Offensives: Operations, 17 July-1 December 1943
Allied Advance to Volturno River, Reorganization, and Attack on Gustav Line (17 January-11 May 1944)
The Far East and the Pacific, 1941: Status of Forces and Allied Theater Boundaries, 2 July 1942
India-Burma, 1942: Allied Lines of Communication, 1942-1943
New Guinea and Alamo Force Operations: Clearing the Huon Peninsula and Securing the Straits, 19 September 1943-26 April 1944
Cartwheel, the Seizure of the Gilberts and Marshalls, and Concurrent Air and Naval Operations, 30 June 1943-26 April 1944
2 posted on 10/26/2013 4:52:26 AM PDT by Homer_J_Simpson ("Every nation has the government that it deserves." - Joseph de Maistre (1753-1821))
[ Post Reply | Private Reply | To 1 | View Replies]
To: Homer_J_Simpson
The first excerpt is continued from October 24. The second is continued from yesterday.

In New Guinea... Japanese forces in the area of Australian held Finschafen withdraw toward Sattelberg.

UNITED KINGDOM: Submarine HMS Thermopylae laid down.
FRANCE: Paris: Diarist Charles Braibant sitting outside a café, “I am counting vehicles crossing the square between 12:20 and 12:30; three cars, one motorbike, a fiacre. On the Place de la Bourse, at an hour when normally Paris would have been bustling...” On Sundays only Germans are allowed to drive cars.

GREECE: Kos: After a week of living on locust beans and jam, British survivors of the ill-fated Kos invasion climbed aboard a caique tonight and made their way to the Turkish coast. They had fought hard, but constant attacks by Stukas, German artillery and 4,000 German infantrymen forced men of the 1st Battalion, the Durham Light Infantry, to disperse. The SS have shot 90 Italian officers for collaboration.

ITALY: USAAF XII Air Support Command and RAF Desert Air Force fighters and fighter-bombers attack gun emplacements and road junctions in the battle area along the east coast and in the center of Italy, also destroying many vehicles and parked aircraft in the Ancona area, where railroad facilities are also hit; a schooner at Porto Civitanova is left smoking; medium bombers of the Northwest Africa Tactical Bomber Force bomb Terracina and an ammunition dump.

CHINA: Two USAAF Fourteenth Air Force B-25 Mitchells attack several vessels at Kiungshan, claiming four sunk or badly damaged and the airfield at Kiungshan is strafed by one of the B-25s.

SOLOMON ISLANDS: Kahili Airfield in southern Bougainville is hit twice during the day by USAAF Thirteenth Air Force B-24 Liberators, B-25 Mitchells, P-38 Lightnings, P-39 Airacobras, P-40s and USN fighters and dive bombers. Buka Airfield on Buka Island north of Bougainville is strafed by P-38s and then bombed and strafed by B-25s and P-38s. P-39s and P-40s join USN fighters and dive bombers in a strike on Kara Airfield in southern Bougainville.

U-420, OLtzS. Hans-Jürgen Reese, CO, went missing in the North Atlantic. All of her 49 crewmembers were lost. The exact cause of her loss remains a mystery.

"Upwards of 20,000 Jews comprised partisan groups in the forests of Eastern Europe, most having escaped from nearby ghettos.
Partisans struggled to survive while planning surprise attacks with their limited arsenal of weapons." 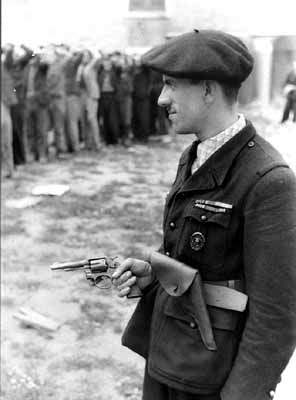 "With hands raised high above their heads, suspected resisters are guarded by a revolver-toting member of the milice (French militia).
The militia operated as the police arm of the Vichy government and as undercover agents in pursuing the members of the Maquis, the French Resistance.
Numbering some 29,000 volunteers by fall 1943, the milice increasingly turned to assassination in its pursuit of power."

OTOH, I was very pleased to see Winston head off Roosevelt's idea of letting Red Army officers in on our highest planning meetings. Goodness knows his government was already penetrated enough without giving them a seat at the highest table.