Hardiman is a name derived somehow, from "Human Augmentation Research and Development Investigation." and Man from MANipulator. Sometimes written as HardiMan, Hardi-Man, Hardi Man, Hardiman I. Said to also be officially called the "Powered Exo-skeleton." Note: some reports suggest that only one arm of Hardiman's was built. The above photo usually accompanies that comment, but it is incorrect. A complete Hardiman was built with both arms, but the comment refers to the earlier tests of just the single, upper manipulator. Later, even when the full machine was built, one side was made static, and the other side was capable moving. The Hardiman stated in November 1965. The early phases were on human factors and kinematic concepts, which were completed in 1966. The results of this required changes, where the original concept was for a single master-slave system, now to be split in two, the upper arms, and the lower legs.

By the end of 1967, the slave prototype had been built following load-bearing joint tests.

There were technological problems with the hydromechanical servos, mainly around their stability. An interim study was put together and concluded by April 1968. The solution was to go to electrohydraulic servos.

Although the plan was to build the legs first, this setback meant that the ONR directed the program to complete the arm system. By the end of 1969, the single arm tests were completed.

The leg and girdle systems were completed late 1970, but was not able to balance or walk without support. Major kinematic problems were arising and could not be overcome within the program's timeframe. The approach was taken to fasten the master leg to the slave at the girdle. This change the operating mode from "operator walk" to "operator ride".

Within these constraints and the assistance of a supporting tether it was possible to to demonstrate a limited ambulatory capability with the leg system. A movie was made of this {RH:where is it now?]. Concept drawing showing the loading of bombs into an aircraft.

Lots more photos and tech drawings of the G.E. Hardiman at:

Tony Stark downsized and upgraded it. 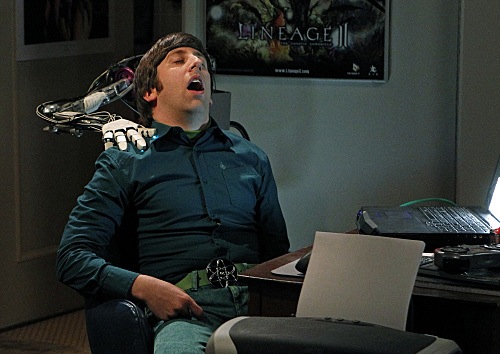 There were a lot of articles about things like this in Popular Science in the 1960’s. Then it ll all disappeared for decades. perhaps because the government research grants were cut off.

that’s where john got his idea for the forklift suit in Aliens.

And christened it , "HULC"