WRAL's VIDEO: Scott Mason tells the story behind an old wrecked train in the woods of Jackson County.

TOPICS: Chit/Chat; TV/Movies; Travel
KEYWORDS: movies; specialeffects
The scene involving Kimble's prison transport bus and a freight train wreck was filmed along the Great Smoky Mountains Railroad just outside of Dillsboro, North Carolina. Riders on the excursion railroad can still see the wreckage on the way out of the Dillsboro depot. 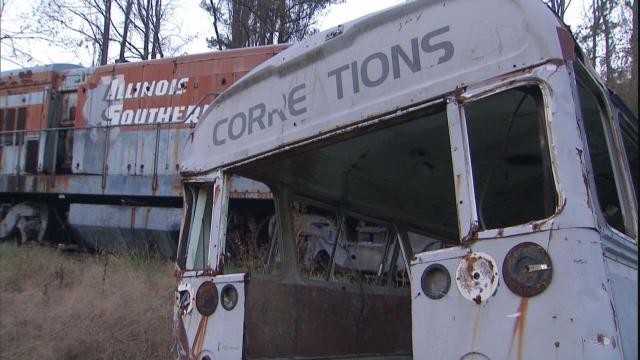 One of the best movie crash scenes ever!

I can’t believe that wreck was real. I guess I am CGI’ed to the point in thinking everything Hollywood did the past 20 years is fake.

To: Lazlo in PA
"I can’t believe that wreck was real."

Talk about needing to get a shoot right the first time!
How the heck do you "redo" something like that?
Looked great on the big screen of a movie theater.

My thought, too. Loses a lot on the small screen. Dittos for ID4. (ID4 destructions, BTW, were done with scale models, not computer graphics.)

9 posted on 12/29/2010 4:47:39 AM PST by Lonesome in Massachussets (Socialists are to economics what circle squarers are to math; undaunted by reason or derision.)
[ Post Reply | Private Reply | To 8 | View Replies]
To: smokingfrog

Fine. Go get a cane pole, catch the fish that ate him.

10 posted on 12/29/2010 4:59:51 AM PST by Lonesome in Massachussets (Socialists are to economics what circle squarers are to math; undaunted by reason or derision.)
[ Post Reply | Private Reply | To 1 | View Replies]
To: smokingfrog

I thought Hollywood types cared about the environment???? Why did they leave this massive pile of litter in the pristine wilderness??????

When Buster Keaton made his movie, The General (1926) and finished filming the scene of the locomotive crashing off a bridge into the waters below, he left the wreckage behind. It remained there until WWII when it was collected for scrap metal for the war effort.

Ditto. I always figure with computers these scenes are CGI'ed. It's impressive to hear about a special effects shot done using the real thing.

I'm reminded of a scene in the movie 'Gladiator' where Maximus (Russell Crowe) is in the arena with another gladiator and two chained tigers are released from hidden pits (a sort of extreme 'out of bounds' marker). First time I saw the movie I thought wow those tigers look so real. It turns out they were real tigers!

13 posted on 12/29/2010 6:14:01 AM PST by 6SJ7 (atlasShruggedInd = TRUE)
[ Post Reply | Private Reply | To 5 | View Replies]
To: lowbridge
Hi Lowbie! Happy New Year! A few years ago, I had the opportunity to see Keaton's General at the Westport Playhouse accompanied by the brilliant Rick Benjamin's PARAGON RAGTIME ORCHESTRA just as it would have been enjoyed orginally in theaters with vintage instruments. It was one of he most enjoyable theatrical moments I ever had in my life.

From a WSJ review:

The 1927 slapstick comedy stars Keaton as Johnny Gray, a hapless railroad engineer who does everything wrong - and in the process gets everything right.

At first rejected by the Confederate Army, he manages to rescue The General, the stolen locomotive he's the engineer for, then defeats the Union Army in battle, earns his officer's stripes, and gets the girl.

Keaton was at the height of his fame when he made the movie, which is brimming with examples of his comic timing, physical daring, and frantic energy.

Keaton manages to express as much feeling with his face as his body. With his long nose, high cheekbones and big eyes, he conveys joy, surprise, fear, irritation, whatever emotion a scene demands.

Dressed in vintage garb like the rest of his musicians, conductor and pianist Rick Benjamin led the Paragon in a spirited performance. There were a few easily recognizable songs, like "Dixie" and "I've Been Working on the Railroad."  But much of the music was simply a direct expression of the action on the screen.

In addition to an extended chase scene with one slow-moving locomotive trying to catch up with another, Keaton is faced with a variety of obstacles - lightning, a bear, a rainstorm and a broken sword.  And the Paragon was right there, setting the mood.  Sometimes the vintage drum set stood out, sometimes the beat was set by the violins, while at other times, the cornet seemed to mock Johnny Gray's earnestness.

The combination of film and music elicited a lot of laughter from the audience, even when a train fell into a river as it traversed a burning bridge, even as Keaton unwittingly killed a Union sniper with his broken sword. 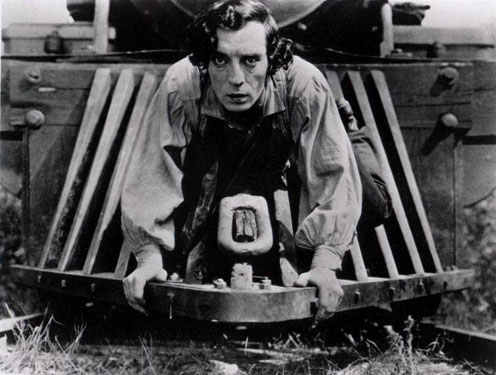 I just figured this was WIlly Green’s back yard.

17 posted on 12/29/2010 8:31:56 AM PST by Osage Orange (MOLON LABE)
[ Post Reply | Private Reply | To 15 | View Replies]
To: stefanbatory
If the train had crashed because the evil capitalists were cutting corners on maintenance to make an extra buck, this would be another Love Canal. But since Hollywood wrecked the train on purpose, it's a tourist attraction.