What do you know? The Medieval Warm Period, which either “didn’t exist” or “only happened in Europe”, also hit Western Antarctica. 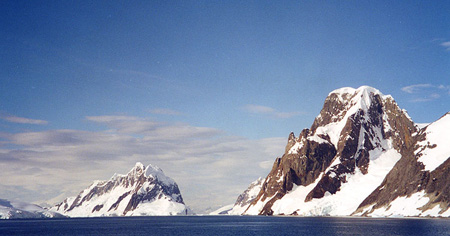 The climate models don’t know why the world was warmer 1000 years ago. They don’t know why it cooled into the Little Ice Age either. The models don’t do regional projections well, and they don’t do seasonal projections with any skill, and they (in the last ten years) don’t work on short decadal timeframes either, but surely when it comes to big global temperature changes the models have got all the major forces figured out? Surely they’d be able to predict large movements across the entire globe eh? — but the first test we come to, a mere thousand years ago, shows the models have a predictive ability not significantly different from a coin toss.

Just because it was warmer 1000 years ago (due to some other reason), doesn’t mean that CO2 isn’t responsible for this warming cycle, but when all the evidence for CO2′s guilt comes only from models that can’t get the last warming cycle right, and from argument from ignorance (“Our models don’t project this warm period without putting CO2 in!”) then we know that the “evidence” (such as it isn’t) is very weak. The mysterious forces that warmed us a thousand years ago could easily be at work right now. Worse, some entirely different factor could be too. The unknown unknowns eh?

During the “perfect stable idyllic climate” before SUV’s and power stations were invented and while the global population was one 20th of what it is today, ice on the Western Peninsula was at least as degraded as it is now, or possibly was even more so.

The timing of the warmest era 700 – 1000 years ago fits in very well with Craig Loehle’s reconstructions.

“Is the recent warming of the Antarctic Peninsula unique in the Holocene?”

The three U.S. scientists report that “peat from the overrun sediments dates between 707 ± 36 and 967 ± 47 cal. yr B.P.,” leading them to conclude that “ice was at or behind its present position at ca. 700-970 cal. yr B.P. and during at least two earlier times, represented by the dates of shells, in the mid-to-late Holocene.”

In language pure and simple, Hall et al. say their findings mean that “the present state of reduced ice on the western Antarctic Peninsula is not unprecedented,” which leads them to pose another important question: “How widespread is the event at 700-970 cal. yr B.P.?”

In answering their own query, the researchers respond that (1) “Khim et al. (2002) noted a pronounced high-productivity (warm) event between 500 and 1000 cal. yr B.P. in magnetic susceptibility records from Bransfield Basin,” that (2) “dates of moss adjacent to the present ice front in the South Shetland Islands (Hall, 2007) indicate that ice there was no more extensive between ca. 650 and 825 cal. yr B.P. than it is now,” that (3) “evidence for reduced ice extent at 700-970 cal. yr B.P. is consistent with tree-ring data from New Zealand that show a pronounced peak in summer temperatures (Cook et al., 2002),” that (4) “New Zealand glaciers were retracted at the same time (Schaefer et al., 2009),” and that (5) their most recent findings “are compatible with a record of glacier fluctuations from southern South America, the continental landmass closest to Antarctica (Strelin et al., 2008).”

In light of these several observations, it would appear that much of the southern portion of the planet likely experienced a period of significantly enhanced warmth that falls within the broad timeframe of earth’s global Medieval Warm Period, which truly impressive interval of warmth occurred when there was far less CO2 and methane in the atmosphere than there is today.

See my map of the warmer empirical evidence from Africa, Asia, Europe, Antarctica and America. Which of course is provided in more lavish detail on CO2Science’s Medieval Warm Period database and map:

Was there a Medieval Warm Period? YES, according to data published by 912 individual scientists from 542 separate research institutions in 43 different countries … and counting! To access the entire Medieval Warm Period Project’s database, click here.

Cook, A.J. and Vaughan, D. 2009. Overview of areal changes of the ice shelves on the Antarctic Peninsula over the past 50 years. The Cryosphere Discussions 3: 579-630.

The computer models are crap, I think thats pretty confirmed these days

The United Nations has ensnared the world in voluntary treaties intended to become mandatory later, tricking politicians and the public. The treaties may be vague and open to interpretation over time, using a tactic known as ‘incrementalism’. These treaties affect many branches of government. The treaties are designed to deindustrialize and economically break nations, restrict energy resources (especially for electricity and transportation) and implement taxation schemes based on manipulated science from the UN (the EPA has authority to implement Cap-and-Trade).

The current UN Climate talks in Cancun are now focusing on geoengineering, using it as a tool to extort a binding UN treaty to reduce phony global warming. The AP reported December 4th, 2010 that “we may need geoengineering as a ‘Plan B,’ if nations fail to forge agreement on a binding treaty to rein in greenhouse gases”, per a British House of Commons report.

Geoengineering and contrived global warming lies are facets of Agenda 21, the overarching blueprint for global governing control and depopulation. The article states that geoengineering can cause rain precipitation and other weather changes. Geo-engineering gives the phrase “man made climate disruption” a whole new meaning. It’s just that mad scientists are now in charge of engineering climate with vast risks to those on the receiving end.

The AP article revealed that the primary forces behind geoengineering are the UN, the US and the UK.

The US and the UK governments urged the UN Intergovernmental Panel on Climate Change (IPCC) to study geoengineering, with the US in the research forefront. The article says that “specialists regard the stratospheric sulfates proposal as among the most feasible”- this means chemtrails. But instead of sulfates, patents and evidence indicate that aluminum and barium are currently being sprayed.

The US National Oceanic and Atmospheric Administration (NOAA) will do the unreliable computer modeling tests for the US research.

Watch this video to understand that this is a depopulation program and this NOAA scientist advocates “doing whatever we can to reduce population”.

The new willingness of the UN to consider geoengineering comes just weeks after the UN’s Biodiversity conference in Japan wherein they imposed a moratorium on it until the implications could be fully studied.

The UN used the ‘moratorium’ for support to gain global control over geoengineering and weather. Notably, the US did not sign the UN Biodiversity Convention (another word for ‘treaty’) in favor of the moratorium and UN control.

The UK government hosts the Hadley Center at East Anglia University, the home-base of the UN IPCC and is known for the ‘Climategate’ scandal and manipulated science. Margaret Thatcher established Hadley Center to usher in globalism and to weaken US power. The UN IPCC will pay off hundreds of scientists to study geoengineering for the IPCC’s next assessment report. The UK supports UN control over geoengineering.

Sylvia Ribeiro of ETC was responsible for the UN short-lived moratorium promise on geoengineering at the Biodiversity Convention. She said that the UN must control geoengineering. Her 501(c)3 organization, ETC, has been funded by the likes of the Ford Foundation (known for supporting depopulation) and the HKH Foundation that funds other extreme environmental groups (Tides Foundation, NRDC, Union of Concerned Scientists, etc) with ties to the UN.

Foundations and depopulation policy makers are deeply intertwined; the UN IPCC sets public policy directly and indirectly. An example of this is UN IPCC Chairman Rajendra Pachauri who is married to Saroj Pachauri, a director of the Rockefeller founded Population Council and she also worked for the Ford Foundation. While Rajendra may appear to be concerned about the effects of geoengineering, his wife works to limit population.
The article reports that scientists say warming is being caused by greenhouse gases emitted by industry, vehicles and agriculture. The truth is that only a fraction of 1% of carbon emissions comes from these sources and agriculture, industry and transportation are targets for control. Food production is a depopulation focal point and genetic modification as well as changes in precipitation affect food.

Ocean acidification is another global warming lie. Geoengineering iron seeding or fertilization in the oceans can produce toxic algae blooms and would have little effect on carbon reduction.

Britain’s national science academy said that the greatest challenges to geoengineering may not be science and engineering, but social ethical, legal and political issues.
It is seen as a problem by the depopulation ghouls that many people are aware of the potential effects of chemtrails and are angry about being sprayed like bugs.

Thanks for the excellent reply to an already excellent thread. Keep up the good work!

What happened to the 'warmest year on record': The truth is global warming has halted

Check this one out...I just posted it from WUWT: