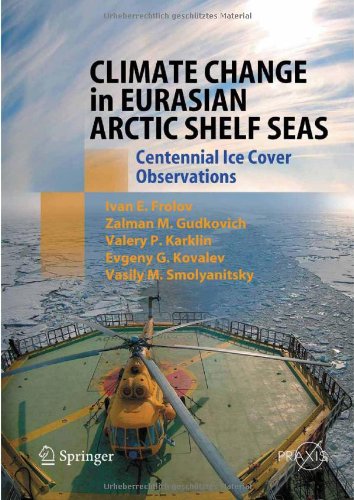 Forget the orthodox view of Arctic climate change – this book has a very different message. (h/t to WUWT commenter Enneagram)

Published last year, this is a synthesis of work by the Russian Arctic and Antarctic Research Institute (AARI). It sets out the data and experience of scientists over 85 years, drawing together much already published in the area. For a book that is billed under a climate change heading, this is actually more an antidote to the hype usually associated with warming in the Arctic. A few pages of each chapter are available on-line and even that is well worth reading; no doubt even better in its entirety.

The Preface sets the tone of the book very clearly – “.…scientists have predicted a significant decrease in sea-ice extent in the Arctic and even its complete disappearance in the summertime by the end of the 21st century. This monograph presents results of studies of climatic system changes in the Arctic, focused on ice cover, that do not justify such extreme conclusions.” “Many studies and international projects, such as the Arctic Climate Impact Assessment (ACIA), attribute the air temperature increase during the last quarter of the 20th century exclusively to accumulation of greenhouse gases in the atmosphere. However these studies typically do not account for natural hydrometeorological fluctuations whose effects on multiyear variability, as this monograph shows, can far exceed the anthropogenic impact on climate.”

The book begins by examining the major effects of the Polar Ice caps and their overall stability on Earth’s climate – affecting albedo, and regulating the heat flux from the sea to atmosphere. Climate variations are discussed and the WMO’s “30 year average” definition of climate is not considered applicable in the Arctic because fluctuations in the polar climate are so large.

Chapter 2 looks at what is known about changes in sea ice in the 20th century. The Russian data sets probably hold the most extensive information available for the first half of the century due to interest in the Northern Sea Route in the 1930s. In addition, measurements of ice thickness also go back to the middle of the 1930s when they were taken regularly for coast-bound ice at many of the Polar stations.

It is particularly interesting what they say about Arctic air temperatures (Chapter 4). “Periodic cooling and warming events are evident in air temperature fluctuations in the Arctic during the 20th century, similar to changes in ice cover.” A cool period at the beginning of the 20th century was followed by what is commonly referred to as the “Arctic Warming Period” in the 1920s-1940s. Relative cooling was widespread between the late 1950s to late 1970s, followed by the current warming period peaking in recent years. Gridded average temperature anomalies for 70°-85°N produce a curve that fits a polynomial trend to the sixth power and the cycle periodicity is 50-60 years (Figure 4.1). Other indicators in Arctic and Antarctic support this cycle and show its global nature. On the subject of polar amplification, whereby weather and climate variability increase with latitude, a number of models and explanations are discussed. None of these involve CO2.

THIS IS AN EXCERPT

I personally prefer water to ice. Chewing on ice when you’re thirsty kind of sucks.

USGS glacial mass balance data had not been updated since 2005.

The slowing Gulf Stream currnts should help the Arrtic cool even quicker.

I will examine this post more carefully later on. Thanks.

I wonder how cold it is going to get?

I am guessing the average US winter temperatures will drop about another 10 degrees. Last year was 31.4 down ward trend from 37.4 of 2000.

Greenhouse gases are already collapsing. Ozone production on ground level is dropping. Humidity in the upper atmosphere is dropping.

This will excellerate cold.

Thousands may die in a blackout.

Ireland will probably put hundreds of horses to sleep this year. Mongolia lost millions in livestock.

Scotland lost 17,000 lambs and New Zealand are counting their losses from a late winter snow storm.

The ants in my yard are digging deeper in to lower soils this year. They went past top soil way down into the clay this year and still going.

My trees are too dry to support all of its branches.

My swimming pool losses water each week due to drought.

No hurricanes really hit us.

Florida homes have heat pumps that really only work down to 32 degrees. The coming winters are too cold for that.

Climate changes, that’s a fact. Which way it will go, when, how much, and for how long are all up for conjecture. What is known for sure is that we are importing too much fuel from people who don’t like us. We need to become more independent, and not use up our own fuel resources leaving nothing for our grandchildren and their grandchildren.

So far as winter is concerned, in the mid Atlantic states, last winter was a doozie. I have noticed that when we have one kind of winter, Europe has the opposite. So my guess is this winter will be less difficult in my area. That said, while the snow last winter was unbelievable, it was not all that cold compared with earlier decades I have experienced.

14 posted on 10/16/2010 7:58:40 PM PDT by gleeaikin (question authority)
[ Post Reply | Private Reply | To 12 | View Replies]
To: Paul Pierett
In Central Florida The ants in my yard are digging deeper in to lower soils this year. They went past top soil way down into the clay this year and still going. My trees are too dry to support all of its branches. My swimming pool losses water each week due to drought. No hurricanes really hit us. Florida homes have heat pumps that really only work down to 32 degrees. The coming winters are too cold for that.

Al Gore and the stupid corrupt dem 'scientists' should be sued and jailed for the damage they've done... Hats off to the Russians for telling the truth.

I had a hunch to check my pings, thank you.

We too had an open winter (like Europe I guess?), but it was also very cold. Here it feels colder that perhaps it would because of the Great Lakes, must be the humidity (dampness) that makes the cold seep into the bones. :’) When it warms up just a bit, we get snow. If it snows when the temps are bitter, the “flakes” are hard little pellets and accumulation is small.

To All, we are in a solar sunspot minimum and that will last about 20 more years. The climate lag time is 5 to 14 years. So, at least 30 years of cold winters ahead.