The establishment barks “cherry-picking” at skeptics who claim a particular year was cold, or quiet, or less stormy, but where are the caveats when the mass media churns out record single “hot year” headlines as if they matter: 2010 is hottest year EVER!

What’s not obvious is that breaking those records depends on the data set. According to satellite data there have been no “hottest year ever” records since 1998, though as it happens, NASA doesn’t seem too keen on using data recorded from space. Go figure.

With ground stations, every single station requires hand-made “adjustments” and many stations are ignored completely. The results from ground stations are “interpreted” to cover anything from zero kilometers right up to 1200 km. I guess, only a God of Science would know which thermometer has that magic-1200-gift. Meanwhile, the satellite records are a massive collection of data recorded continuously 24/7, year after year and covering all round the globe, land and sea.

Part II of this series is about those “adjustments” and the different data sets.

[A series of articles reviewing the western climate establishment and the media.
The first article discussed thermometer placement tricks.]

There are lots of ways to find “warm”. More tricks from the climate establishment:

Why would the climate establishment play these tricks, if their case and data were strong?

Don’t these tricks strongly imply that their case is weak or wrong, and that they know it?

What Difference Do Their Tricks Make?

The climate establishment always quotes the land-thermometer temperature records as the global temperature, usually the one by NASA GISS: 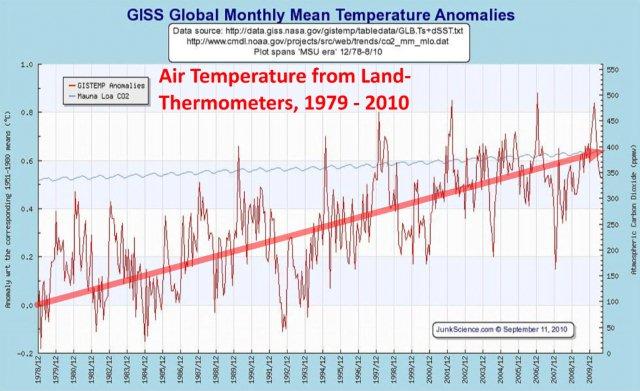 Figure 13: From the Goddard Institute for Space Studies (GISS) at NASA, run by Jim Hansen, the “father of global warming”. (In 2009 Hansen endorsed a book which claims “The only way to prevent global ecological collapse and thus ensure the survival of humanity is to rid the world of Industrial Civilization.”) From land-based thermometers (such as those in Figure 1 – 12) and a few ocean thermometers, but no satellite data (despite the “Space” in GISS). Same timeframe and format as the satellite data in the next figure, for easy comparison. Source (updated monthly).

But there is an alternative method of measuring global temperatures—with satellites.

Satellites measure the temperature 24/7 over broad swathes of land and ocean, across the whole world except the poles. While satellites had some initial calibration problems, those have long since been fully fixed to everyone’s satisfaction. Satellites are mankind’s most reliable, extensive, and unbiased method for measuring surface temperatures.

There are two independent satellite records, and they agree with each other. Here is one: 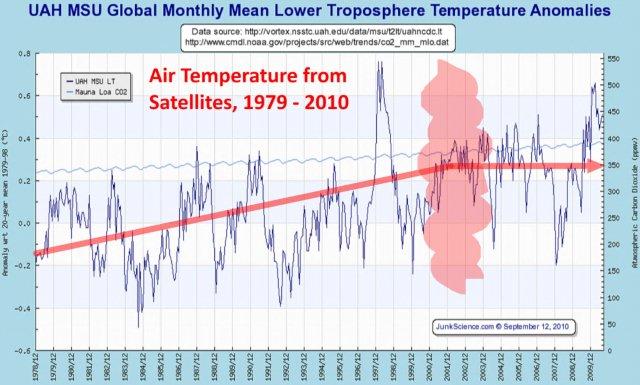 Figure 14: Satellite data from the University of Alabama in Huntsville (UAH), using the NASA AQUA satellite. Same timeframe and format as the land-based thermometer data in the previous figure. Source (updated monthly).

Obviously this has different political implications from the land-based thermometer data.

The satellite data is inconvenient to the climate establishment, and they never refer to it. But they appear to have a strategy for dealing with it in the future: they underfund the temperature satellites and do not fix flaws as they arise.

An important admission. Shortly after the ClimateGate scandal broke, a leading member of the climate establishment, Dr. Phil Jones, Director of the Climate Research Unit (CRU) at the University of East Anglia in the UK, in an interview with the BBC, agreed that:

“from 1995 to the present there has been no statistically-significant global warming”.

Jones also noted that it has been cooling since 2002, but that this trend was too short to be statistically significant.

Their thermometer tricks create the picture of ever-rising temperatures that they need politically, but contrasts with the superior and unbiased satellite picture that shows global warming paused around 2001.

Why do the climate establishment use the land- thermometer temperatures in their communications with the public, when they could use the satellite data instead?

They have tacitly admitted their land-thermometer data is deeply flawed by setting up a new network of properly sited thermometers (which won’t report for 50 years) and by ceasing to use individual thermometers that get ridiculed on the Internet. Obviously this goes beyond mere incompetence.

Is the Western Climate Establishment Corrupt?

Of course it’s corrupt. In “mild” years, the climate grant-writers focus on the warm winter. In years with a cold winter/hot summer, they ignore the winter. In cool years, they claim that this is proof of GW because it was different last year and will be different next year. In hot years, they scream that the sky is falling.

Criminals are corrupt. Liars are criminals. Identify the liars, the con-men, the criminals and their machinations/enablers.

Thanks for posting. Very good article.

Life, liberty and the pursuit and destruction of totalitarians.

And they claim this is a hot year. If so, why do we see this right now ?

Completely, totally, without a doubt, couldn’t be more corrupt.

8 posted on 10/16/2010 9:11:57 AM PDT by Robert A Cook PE (I can only donate monthly, but socialists' ABBCNNBCBS continue to lie every day!)
[ Post Reply | Private Reply | To 2 | View Replies]
To: Bryanw92
Did you happen to see Jesse Ventura’s “Conspiracy Theory” which was on last night on History International? I know, it's Jesse Ventura, hardly the most credible person and I know that the show is about conspiracy theories but nevertheless they did an excellent program about global warming which was revealed to be a United Nations fraud and conspiracy.

Among the people interviewed was an MIT anti-global warming scientist who has had his life threatened and British Lord Christopher Mockton who says that global warming is a conspiracy to create a world government and that it was fabricated by the same people who are behind the European Union. Scientists are controlled by funding or withdrawal of funding. Al Gore is making millions of global warming.

The green movement was founded by Sir Maurice(or Morris?) Strong who has been working with the United Nations for many years. Morris Strong answers to financier Edmund de Rothschild. Rothschild is also behind a single world currency which will give the aristocrats of the world an opportunity to cash in.

Gore is affiliated with Hura Corporation of Silicon Valley which is making money off the global warming scare and Maurice Strong, who now lives in Beijing, China, was part of the Chicago Exchange which is involved in carbon credits and he also launched the UN’s green movement in 1972.

You can't take every conspiracy theory seriously but this one seemed right on target. Conspiracy Theory is on History International at 10 pm on fridays.