The recent nomination of Elena Kagan to the Supreme Court has been marked by an under-the-radar controversy about a photograph of her playing softball. Why is this so controversial? Is it because such a photo demonstrates that she is a subversive, and un-American? (After all, the saying is "as American as baseball," not softball.) Or is it that such a photo tends to be a bit of grandstanding by the left, rubbing the collective noses of the right in the fact that Socialist and Communist Senators will be lobbing nothing but softball questions at her during her coronation confirmation hearings? As opposed, say, to the high-tech lynching afforded Justice Clarence Thomas, the foul calumny and shameful treatment of Robert Bork (which became its own verb, and set a new low standard for the left), or the race-based opposition to Miguel Estrada even aside from the Supreme Court?

Well, according to those "in the know" it is none of these things. Apparently, the photograph of Kagan playing softball is supposed to be a coded message that she is gay. Or, as Chef from South Park once put it, "Children, she plays for the other team."

But all this talk of softball brings me back to my own childhood, from the organized games at recess to the pick-up games after school. There, as in the current political process, sides were chosen: the captains were selected by acclaim, and the players to be chosen by the team captains alternating with one another. The coveted first pick (reserved for one of the top two or three home-run hitters, who could turn around the game with one swing) was assigned by a very curious ritual. One of the captains would hold a bat upside down and toss it in the air for the other captain to catch one-handed while it was still vertical. After catching the bat, the captain would maintain his grip and walk over to the first captain. The first captain then would grab the bat, slightly closer to the top, with the bottom of his hand touching the top of the other captain's first hand. Then the captain who had caught the bat would remove his hand, and himself grasp the bat by the handle, with his new grip immediately above where the other captain's hand was resting. This process was repeated until there was no room for either captain fit their fingers between the other captain's hand, and the nub at the skinny end of the bat. The person whose hand was the closest to the nub got first pick.

While this process was going on, the entire pool of potential players watched and cheered on their (hoped-for) captain with gusto. Usually the process was good-natured. But once in awhile, whether motivated by greed or panic, one of the captains would attempt to short-curcuit the process, once he saw that he was going to lose the first pick. He would do this by putting his free hand over the nub of the bat, in order to secure the top spot. Such a move was referred to as "bottle-capping" and there was an unwritten, gentleman's agreement against it. But there was also a second unwritten rule, that if neither captain had called out "No Bottle Capping" before the bat had been first caught, then bottle capping was technically allowed -- even though to resort in it marked one as rather unsporting and unscrupulous. In those simple days of childhood, honor counted for a lot.

Which returns the subject to the process of nominating and vetting judicial picks. The Supreme Court, that august body, has by long precedent held itself aloof from mere political quibbles. This is demonstrated by the Court's attendance at the annual State of The Union address given by the President, where the several justices show up, but neither speak, nor stand, nor applaud.(*) So, too, for a long time the selection of nominees and their confirmation by the Senate has been held to be a more serious, deliberative, almost diplomatic affair, in which petty partisan differences are set aside or masked in order to join in the solemn task of finding a new interpreter of the Constitution.

But this has not lasted for long. During the Supreme Court hearings under Republican Presidents, the air of the Senate has been one of contempt: and no doubt, since the Democrat Socialist Communist Party in Congress has long realized that they would be unable to attain their agenda and goals within this country without subverting the Courts. And what good is it, after all, in corrupting lower courts when your best-laid plans keep getting struck down by the higher courts? No, in order to make the People's RevolutionTM certain, it is best to control the ideological makeup of the Supreme Court.

Hence, the raucous behaviour, slander, dirt-digging, and "politics of personal destruction" engaged in by the left: from Ted Kennedy railing on about how Robert Bork would single-handedly revert the United States to a land of segregated lunch counters and back-alley abortions, to Anita Hill coming up with specious tales of sexual harrassment from a man whom she followed from job to job. And it is this behaviour, coupled with the "hands OFF!" cry from the left regarding Sotomayor and Kagan, which is so interesting. The left's favorite tactic is to escalate beyond decorum, to the point that they are breaking the rules: but always in such a way, that any attempt to put them in their place, or to call them out, would result in a greater breach of decorum, or just too much trouble, than saying nothing and allowing them to gain the point or the territory. "No bottle capping!" they cry, just before slipping their own hand atop the nub of the bat. And so rummaging through Robert Bork's garbage cans looking for dirt, spreading whispering campaigns about Clarence Thomas, explicit racial discrimination against Estrada are all part of the game: but showing photographs of Kagan with a softball bat, or asking her to account for her arguing in favor of goverment suppression of political speech, why -- these are INTOLERABLE!

The real solution, of course, would be to introduce the leftists (long used to a free pass) to REAL political hardball: say, Ty Cobb or Juan Marichal style. Why SHOULD Obama get away with nominating a probable lesbian, affirmative-action queen, who has argued AGAINST freedom of speech, to the court? Why shouldn't he pay a stiff price just for trying? (*)It is a mark of the general sniveling, bullying childishness of the current administration that the President felt he had to take a verbal swipe at the Court during the State of the Union address. And don't forget this little nugget of class from our sacred Man-Child: 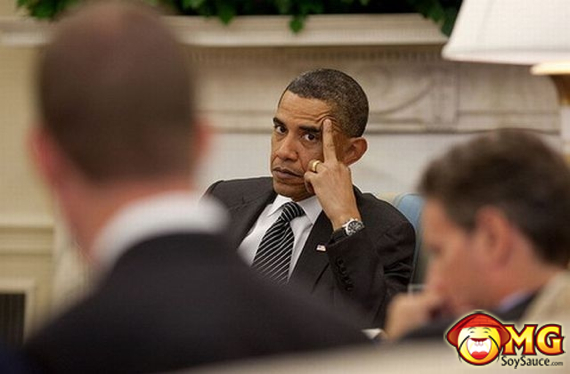 It must be a Hawaiian good-luck symbol.

Birdcage liner on the Kagan nomination.

Thanks.
Try the fish, I’ll be here all week!