The small but elegant seabird migrates more than 50,000 miles every year

Cheetah, killer whale, Arctic tern. The latter may sound an unlikely contender for nature’s greatest athlete, yet the small but elegant seabird migrates more than 50,000 miles every year — the longest trek of any creature, according to research.

The Arctic tern breeds as far north as the Arctic before flying tens of thousands of miles to Antarctica and back within a single year. By moving between Arctic and Antarctic summers, the bird sees more daylight than any other creature on Earth.

Until now, the birds had only ever been tracked as far as South Africa, through traditional bird ringing studies. “After that we lost them and we had no idea of how they got back up north,” said Carsten Egevang, of the Greenland Institute of Natural Resources in Nuuk, who led the research.

Using miniature geolocators to track 11 Arctic terns from colonies in Iceland and Greenland, Dr Egevang and colleagues were able to follow the birds’ complete route for the first time.

The findings, published today by the Proceedings of the National Academy of Sciences, showed that some individuals travelled more than 50,000 miles annually. “They’re the ultimate commuters,” Dr Egevang said. “This is at the edge of the capacity of any living creature.”

Previously, the furthest recorded migration was by the sooty shearwater, a seabird that makes a 40,000-mile circular trek each year from New Zealand to Alaska.

Arctic terns feed in shallow coastal waters on small fish such as sand eels, and nest on beaches and offshore islands. The British population breeds mostly around the north and west coasts, with the largest numbers in Scotland and Ireland.

Looks like the Forrester Tern around here...not sure about the size. Incredible that this little bird flies so far. Birds are such amazing animals. I got rid of TV but used to like watching The Most Dangerous Catch or whatever it is called about fisherman catching Alaskan crabs. They would be out there in this nightmarish weather with winds and seabirds are right their trying to get some crab legs.

The migration of animals like whales, birds, lobsters and other animals is amazing.

The Arctic Terns arrive in Valdez to nest in May, if I remember correctly. They lay their eggs in the gravel, and the nests are very hard to see. If you get close to a nest, prepare to be divebombed by defensive parents. They arrive on schedule, and they leave on schedule. It was a beautiful thing to see when I lived there.

Wow - a real beauty. Look at those wings. They must be able to soar very well to travel that far. Paint scheme like a fighter plane - white from below and gray from above.

Great story. Amazing birds. I like to hear about super-commuters and Arctic terns are the best. Where do they get the energy to move their wings for their journeys?

Don't know if the Arctic tern does that.

Uhm... Just thinking off the top of my head, here: The Earth has a circumference of almost 25,000 miles. A trip from the north pole to the south pole would be almost 12,500 miles. Same for a return trip. That would put their round-trip migration at about 25,000 miles.

So, what am I missing? How can this bird fly 50,000 miles if it is just going from the northern arctic to the southern and then back? Did the Earth suddenly expand?

The only thing I can figure is that these birds are following a cork-screw path around the globe as they fly in a southerly direction. Obviously, they aren’t smart enough to just fly due south or due north in a straight line. Perhaps this is because they have never met their black feathered cousins and heard the phrase, “as a crow flies...”

Well,...they tracked them...and I think they jogged around for purposes of making feeding stops.

There might be a pretty good arc on that route.

Thanks. There is a little bird at the golf course that would do that. I am not sure what it is. Seems too small for a Forrester Tern.

I love birds. They are amazing and I love watching them.

“Where do they get the energy to move their wings for their journeys?”

Look at those wings. They have one of the highest wing to (light)weight ratios or whatever they call it (big wings small bird). My guess is they do a lot of soaring. 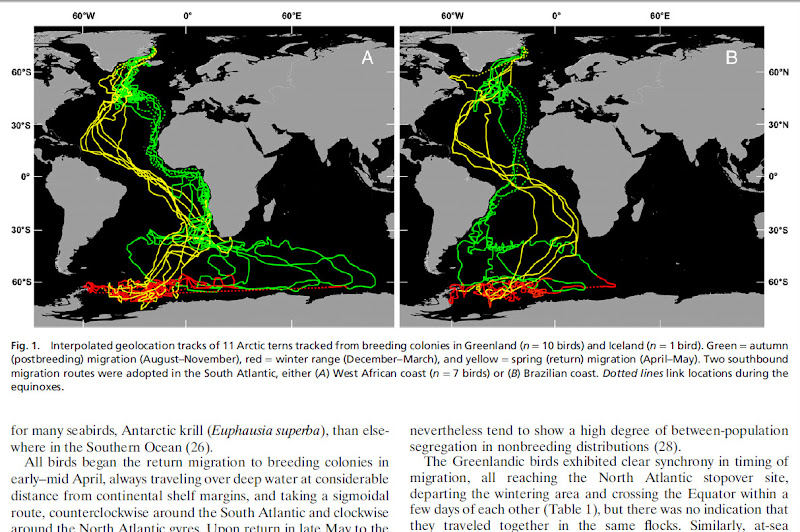 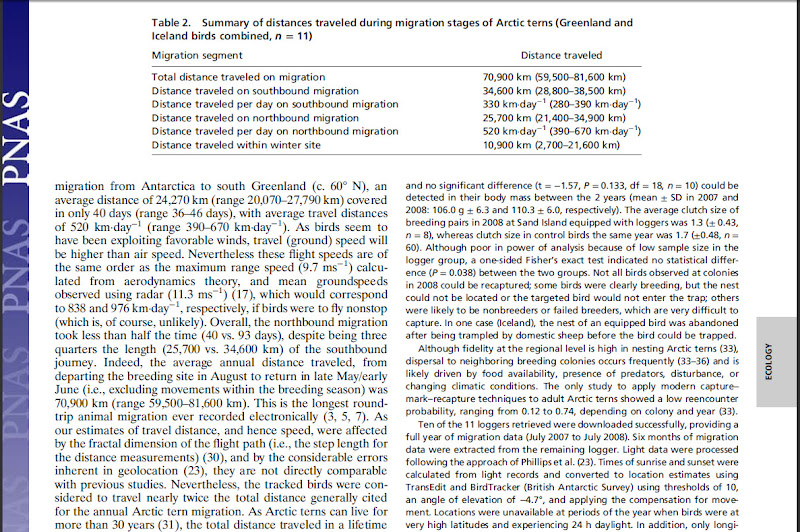 They are beautiful and a wonder to behold. The magnificence of the Lord is all around us and just needs one to take the time to see it each day.

Thanks for the graphics. That explains a lot.