"In a small basin in the hills we came the next day (27th October, 1930) upon a circle 27 feet (8.5 metres) in diameter of thin slabs of sandstone, 18 to 24 inches high. Half were lying prone, but the rest were still vertical in the sand. There was no doorway or other sign of orientation, and though we searched within and without the circle, no implements could be found. I understand that other similar circles have been found in the neighborhood of the Gilf Kebir." 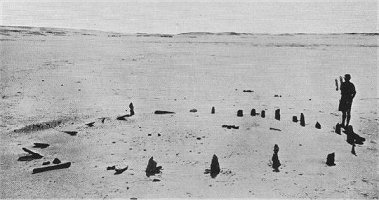 Bagnold and his party made their discovery purely by chance, as the low structure is only visible from a few hundred metres. Bagnold did mark the circle on his map acompanying the Geographical Journal article, however on the scale of 1:10 million the half milimetre dot represents an area 5 kilometres in diameter, plus of course any error in Bagnold's position estimate. It was like looking for a needle in a haystack when we set out to locate the circle in march 2001. However luck was with us, after rounding a low hill suddenly the circle right in front, though the GPS still showed six kilometres to go, based on the position plotted from Bagnold's map. 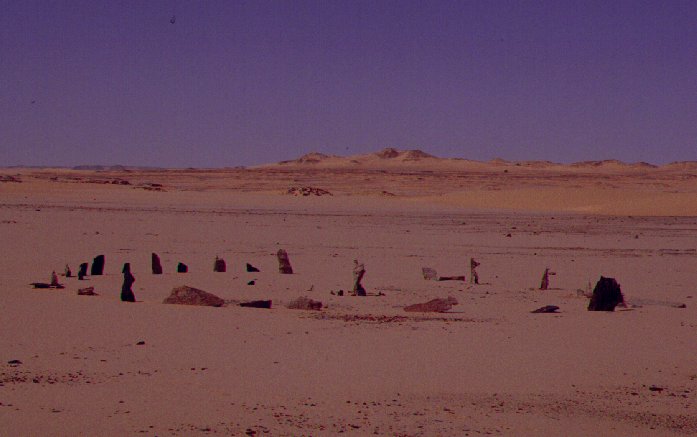 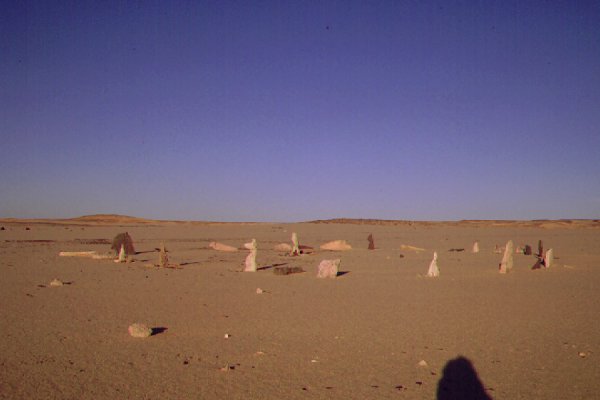 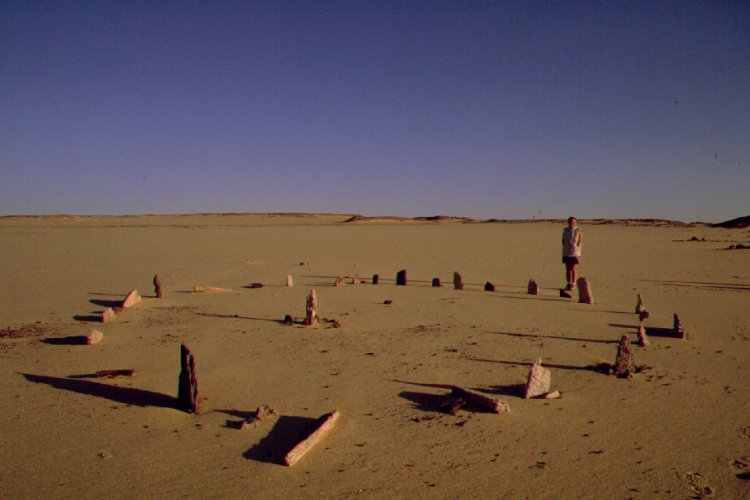 We found the circle much in the same condition as on Bagnold's photo, with a notable exception: a cairn was in the middle. The mystery was solved when we noticed a note attached to the cairn. Wael Abed and Ahmed Mistekawy of Zarzora expeditions have chanced upon the circle two years earlier. On our subsequent visit in 2002 we removed this cairn to a low rock outcrop some distance from the circle to restore it to it's original appearance. Unfortunately it was not possible to identify whether any of the stones used for the modern cairn came from inside the circle, we can only hope that this was not the case. We also noted this second time that a few of the fallen slabs have been righted, probably also by the Zarzora expeditions party. 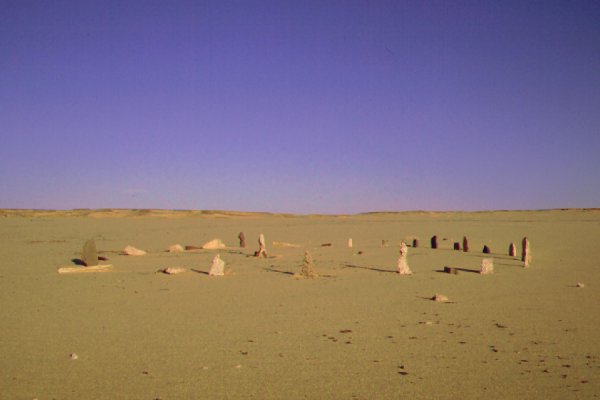 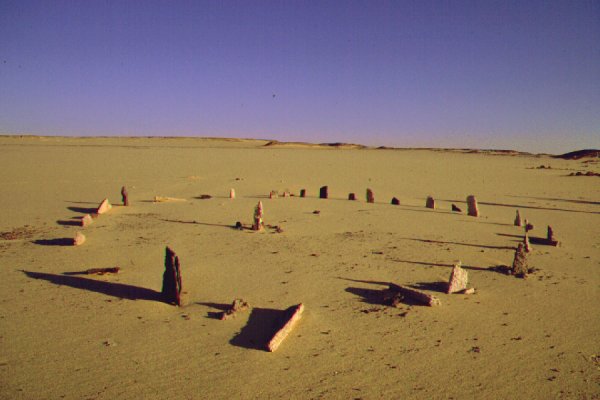 The structure itself is quite unique in the whole expanse of the Libyan Desert. It is true, as Bagnold noted, that other stone circles have been found in the Gilf area. However all of these are 2-3 metre diameter, made of a coarse pile of rocks, most probably "hut circles", formed of rocks anchoring the perimeter of the wooden frame of dome shaped huts or shelters (photos taken on "Unnamed Plateau" between Uweinat and the Gilf Kebir). 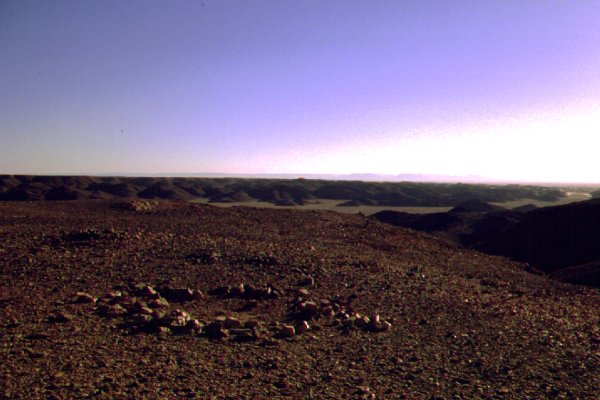 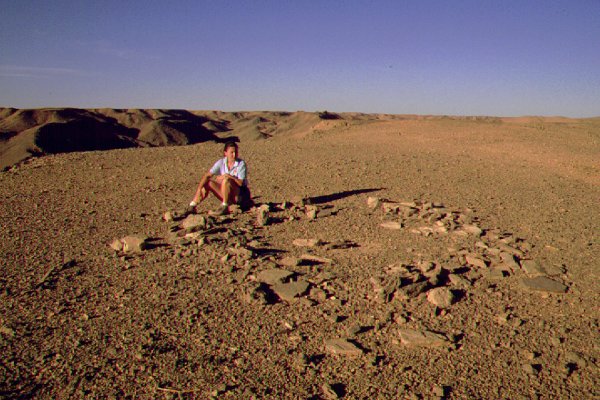 This circle is very different - it's much too large to have been any such building, it is more remisescent on a small scale of the familiar megalithic stone rings of Europe. It is built in the centre of a fairly large irregular shaped patch of flat sand, about one kilometre accross, surrounded by low sandstone hills on three sides, and a chain of low barchans to the west. We could confirm Bagnold's observation, that no stone implements were to be found in the vicinity. A kilometre away, near our campsite, a broken aterian biface and some crude flake tools were noted, but no concentration of artifacts that would indicate any larger permanent settlement. 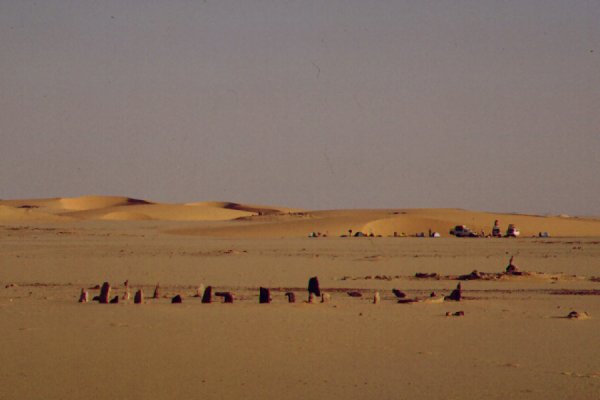 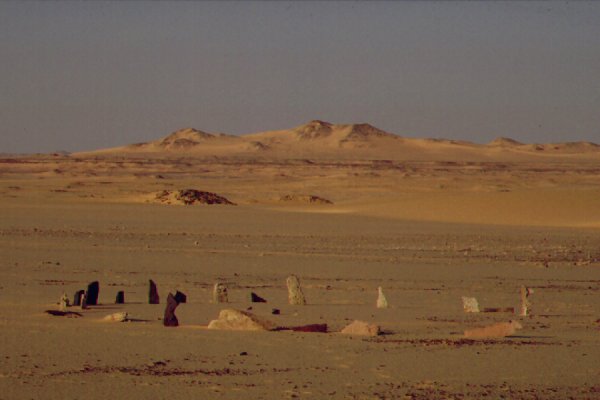 On our return we made a very moving discovery: in an area of fine gravel we noted a set of strangely narrow set of tire tracks. On stopping and following the tracks a little further, we could clearly see the trails of three cars, closely following each other. The three Model A Fords of Bagnold and company, their tracks still clearly visible after 70 years! 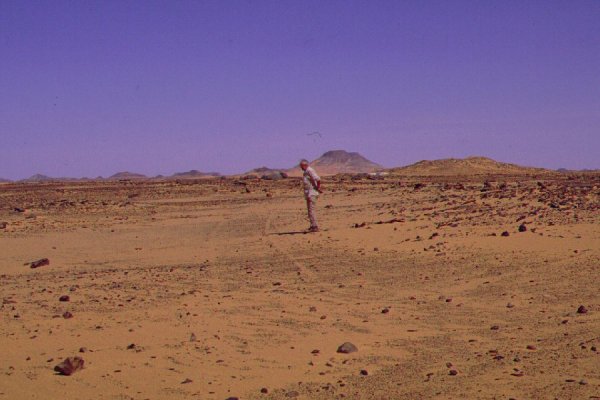 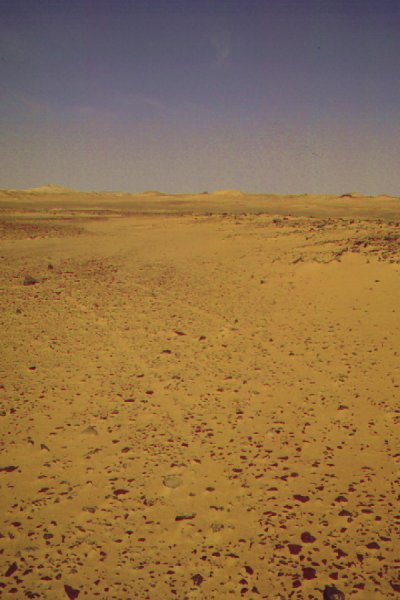 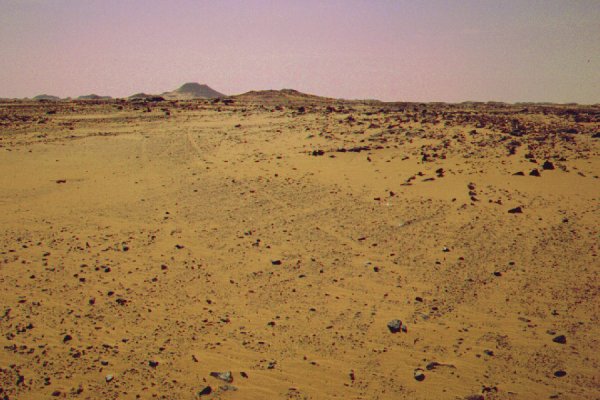 The only other structure that is remotely comparable has been discovered recently by the Combined Prehistoric Expedition aqt Nabta Playa. Since 1998 a series of megalithic structures, and a stone circle bearing some resemblance has been unearthed. Unfortunately the photos published so far reveal little, but the drawing by Wendorf & Schild in Sahara 5. bears more than a superficial resemblance. 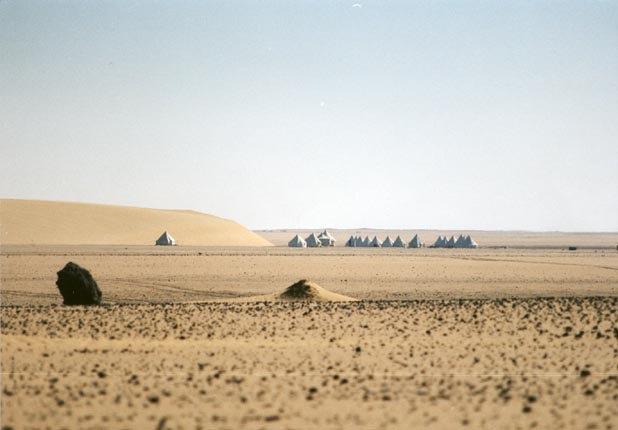 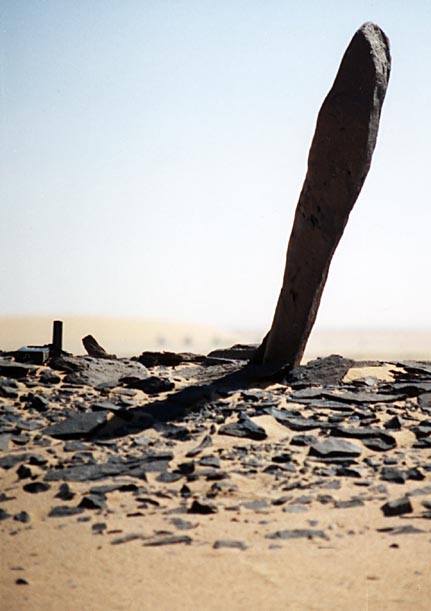 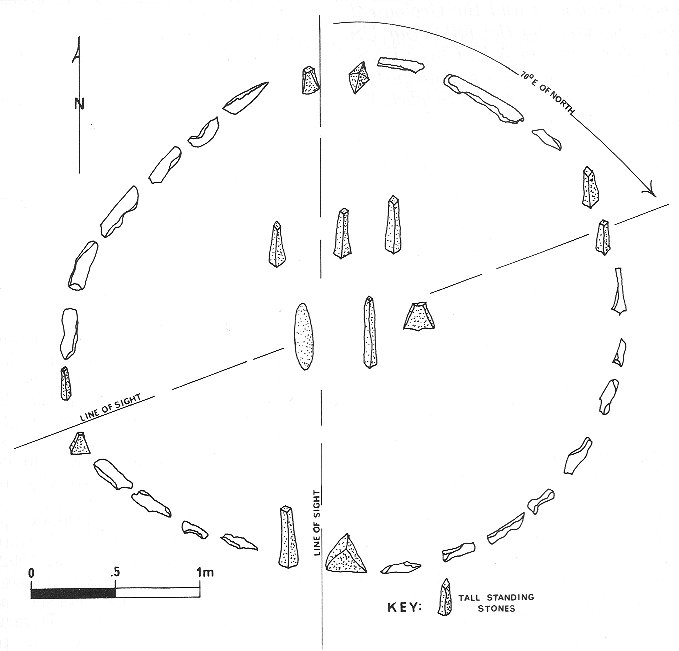 It is interesting to note that Bagnold's circle is not referred to in any of the Nabta publications, possibly the authors are oblivious to it's existence. See:

Y’know, come to think of it, when (briefly) surfing (at work) yesterday or today, I saw a story about a stone circle in California, about 2000 years old. Maybe it was a circular stone... and there was a small village at the site...

i have just created my own stone circle which I have named the seven hathors in honour of the oracle at denderah temple, my friend antoinette came from egypt last week, and was impressed with my circle, she is very much into the mystical side of life, and owns the flower of light center in luxor, Antoinette told me that amazingly there was a stone circle in the libyian desert, so i have had a look on the internet and was really imporessed with your information you have given, which is very impressive and an amazing quest to go on into the desert to find a stone circle, it must have been a truely amazing experience for you.

I have given a link from my own blosite to your page as i was so impressed with your adventure, and i agree i think you did the right thing to remove the new stones from the center as they obviously were not originally placed there

you are truely an indiana jones of the world!!!
best wishes
annouska
you can see the link to your site from my blogsite on
http://englishwomaninireland.blogspot.com/

Just understand, that I merely linked to that interesting article. I’m not in any way connected to the author[the person who actually did the work], and any praise should be directed to him/her.