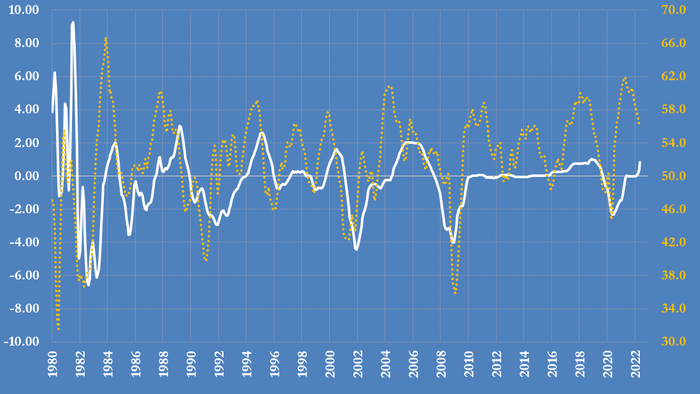 The Federal Reserve is not deliberately trying to induce a recession to bring inflation under control, central bank chief Jerome Powell told legislators on Wednesday. But he said that was a possible and foreseeable outcome of rapid rate rises – an interesting application of the doctrine of double effect.

The central bank hopes for soft landing but feels it must risk a hard one to reduce inflation running at the fastest rate for 40 years. Distillate fuel oil, a category that includes diesel, gas oil and heating oil, are the petroleum products most sensitive to changes in the business cycle so they will be impacted most as the rate of growth slows.

Even if the central bank can engineer a mid-cycle slowdown, rather than a cycle-ending recession, consumption of distillates is very likely to decline over the next year.

Both recessions and mid-cycle slowdowns have tended to reduce consumption of distillates by between 5% and 15% compared with the previous year. 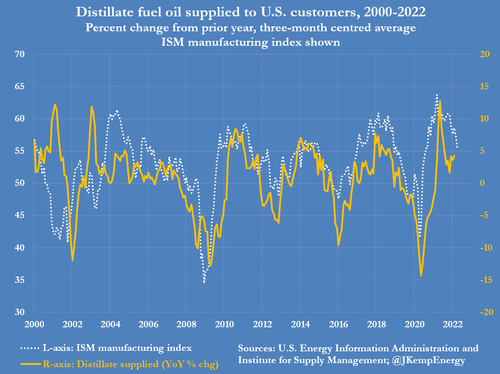 With the volume of distillates supplied to domestic customers in the United States running at a little over 4 million barrels per day, the expected decline is equivalent to between 200,000 and 600,000 bpd.

Europe’s distillate consumption is likely to see a similar or greater fall as the region’s economy enters a recession in response to Russia’s invasion of Ukraine and the impact of sanctions.

Eurozone manufacturers are already on the leading edge of a recession, according to preliminary data from purchasing managers’ surveys for the first part of June.

Rapidly escalating prices for crude, diesel, gasoline, gas and electricity as well as food are likely to force households and businesses to reduce spending over the next few months, pushing the economy into recession.

Lower volumes of manufacturing, construction and freight transportation activity will in turn cut diesel and gas oil consumption in the region, likely by a similar amount to the United States.

Lower distillate consumption is the only way to resolve shortages caused by the rapid rebound in economic activity after pandemic lockdowns, Russia’s invasion of Ukraine, and sanctions imposed by the United States, the EU and their allies in response on Russia’s oil exports.

In time, reduced distillate consumption will give the global refiners a chance to replenish severely depleted inventories and take some of the heat out of diesel crack spreads and prices. 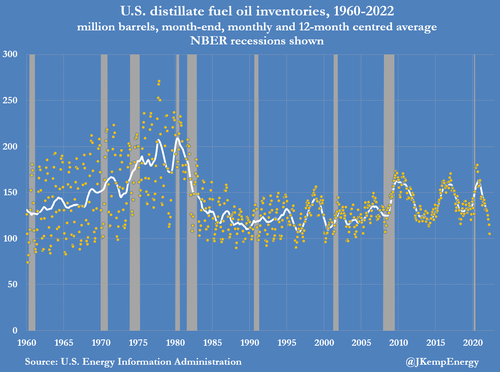 Ultimately, reduced distillate consumption will stabilize and then lower fuel prices and transportation costs, which will flow through into slower inflation later in 2022 and 2023.

But the transition to lower oil prices and slower inflation is likely to involve a painful contraction in manufacturing and construction activity and employment first.

The Fed and the other major central banks may not intend to induce a recession or a significant mid-cycle slowdown, but that is the logical effect of sharply higher interest rates and tighter financial conditions. 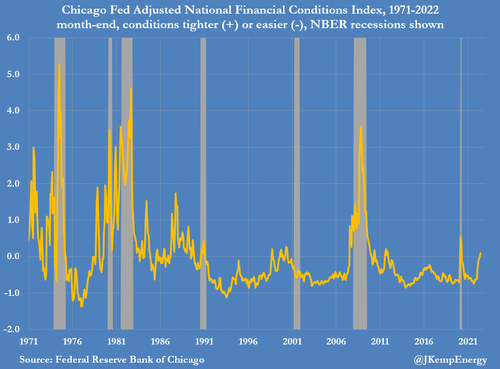 The Federal Reserve is not deliberately trying to induce a recession.....

What the private “Federal” Reserve is doing is jacking up the amount we will need to service the debt. Nothing more...

I was told that there’s no recession.

Wow. If we can go all the way into a depression, then the energy problem would be totally solved.

Won't we just borrow that payment money too?

“I was told that there’s no recession.”

You are correct. A recession is not allowed under a Democrat Administration. Never. Ever.
El Presidente has even proclaimed we are in an unprecedented BOOM.
If by chance a one of the Republicrats is elected president in 2024, there will be a recession by June 2025.
If by an act of God a MAGA Republican (Trump or Kemp) is elected, it will be proclaimed a Depression.

Surely no one falls for this crap.

All of the beautiful graphs and explanations do not change the fact that Biden and his gang are doing this to the nation on purpose. So as the demand for diesel, or anything else necessary for our comfort and survival, is reduced Biden and his gang will reduce the availability with the public comment that no more than that is needed. Thus making it very difficult to bring back the levels available before that point in time.

The mob would call it “the squeeze”...and we are dealing with mobsters.

What a crock, the interest rate just went up and isnt the cause. the economy was already slowing down because of super high fuel prices, food prices, and manufacturing material shortages.

These idiots have got it all wrong. The high fuel costs brought on by stupid purposely joe are the cause of the inflated prices for every single item we purchase.
What did dummy biden expect it’s what they want, crash.