With Hurricane Ida having made its way through Louisiana and Mississippi, leaving behind a region flooded and in many places without power, some local residents and activists are directing their unhappiness at more than just the forces of nature.

As the Category 4 hurricane hit the city, New Orleans Police Superintendent Shaun Ferguson said that authorities would deploy “anti-looting” teams, and would “not tolerate” anyone trying to take advantage of the situation caused by the storm.

On Tuesday, Ferguson said New Orleans police have made several arrests for looting, and Mayor LaToya Cantrell enforced a citywide curfew to begin the same night. But, as people on the ground get their bearings in the wake of the storm, some say the focus on looting is misplaced—or worse.

But here in America luckily we have a second amendment so when the Government fails to protect us we can use our gun rights.

Even some immigrants are accepting our culture and use the second amendment to protect themself.

This morning a video was sent to us from New Orleans Louisiana where “Rooftop Arabs” holds looters at bay.

(video uploaded on the site)

Dozens have been arrested for looting in New Orleans after many evacuated their homes before Hurricane Ida devastated the area.

Orleans Parish Sheriff Marlin Gusman told WWL-TV there have been around 40 individuals arrested for looting in the city. Overall, there were 55 arrests for various crimes, including looting and domestic violence.

After the Category 4 hurricane hit the state, the city imposed a curfew on Tuesday to prevent crime and looting.

Police Chief Shaun Ferguson said at the time there were some arrests for looting, but would not give a number because he believed it would create a “false narrative” that police weren’t in control.

“There’s absolutely no reason for anyone to be on the streets of the city of New Orleans,” Ferguson added.

Many in Louisiana are still without power in the aftermath of the hurricane, and homes are still empty as residents were instructed to stay wherever they evacuated to before the storm.

In New Orleans, around 195,000 individuals are estimated to have evacuated their homes, according to the local outlet.

TOPICS: Government; Local News; Military/Veterans; Society
KEYWORDS: banglist; clickbait; clickbaitblog; guns; hurricane; joebiden; looters; secondamendment; yesweknowitsablog Navigation: use the links below to view more comments.
first 1-20, 21-22 next last
If you value your life you won't throw it away for a pair of Nikes.

Nothing wrong with protecting your business... 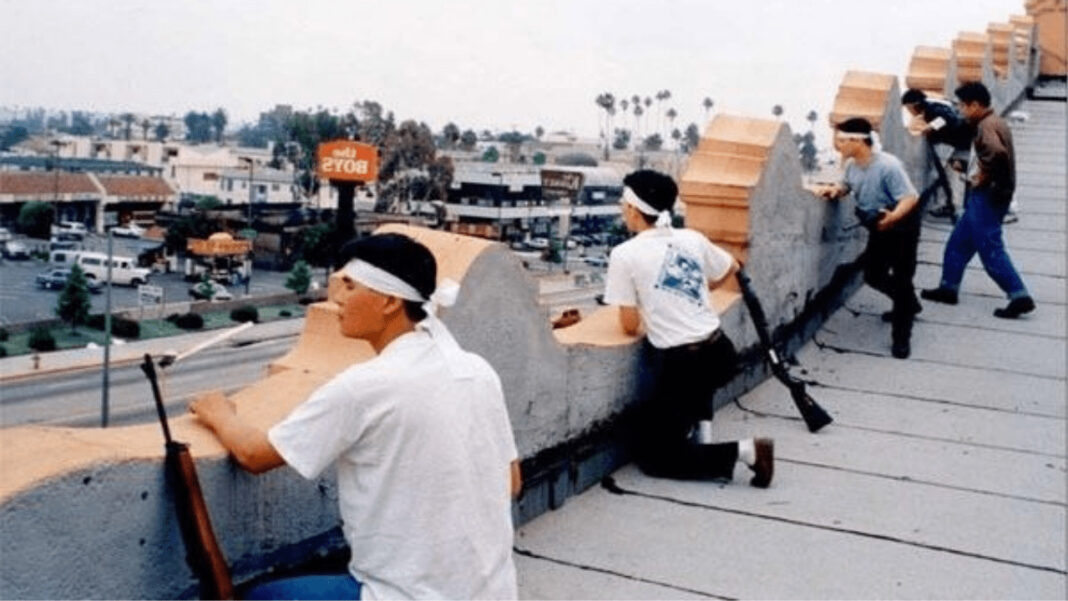 ” he believed it would create a “false narrative” that police weren’t in control.”

Definitely Koreans or Japanese, Arabs not so much. Arabs would have AK-47 and RPGs with maybe a s.vest thrown in for good measure.

Amazing how well-behaved and calm said “looters” are when guns a pointed in their direction.

Seems like with Katrina, coverage was 24-7 for a month after. This is just as bad, and no headlines.

Dim is in charge this time.

If you just woke up from a coma and wondered who was proclaimed the "winner" of the 2020 election, all you have to do is look at how the Dim media portrays natural disasters.

Dim in the WH? Not much bad to see here. Everything's nice and rosy.

When a Repub was in the WH the Dim media who told us over and over that there's no God Who created all things, was the same Dim media who wanted us to believe Hurricane Katrina was the worst thing ever, that it was hand created by George W Bush and he steered it at minorities in Nawluns.

He’s looking for the Heineken.

The video is also kind of telling on how anti-racist the people filming are. (/s)

They keep calling the Arabs names and how they won’t let them get what they want. Then start complaining that they shot someone who tried to force their way in.

I remember the "Roof Top Koreans" (Korean-American business owners) from the Rodney King-related riots. A lot of them were armed with shotguns, which I thought at the time was because (1) it was in the People's Republic of Kalifornia, with all of that state's punitive & confiscatory gun laws, and (2) the cops were looking for any excuse to arrest law abiding citizens (obviously including possession of an evil black "assault weapon"), while blatantly ignoring the looters.

In retrospect, I've come to see a shotgun as almost the ideal home or business defense weapon in a riot situation (particularly if "law enforcement" is supporting the arsonists, assailants & thieves), because almost everybody has a shotgun, and it's not real easy to match up pellets to a specific firearm...

All the social justice bullshit of the last couple of years has gotten me out of ALL sports.
I just don’t need/want them in what’s left of my time on this planet.
Spend my leisure time playing with my WV entertainment center...bird feeder and a pellet gun.

16 posted on 09/07/2021 8:40:55 AM PDT by Roccus (Prima di ogni altra cosa, siati armati!)
[ Post Reply | Private Reply | To 15 | View Replies]
To: Roccus
Here in Alabama, Bama's coach did the SJW stuff briefly. We boo'd him loudly even though he's in the middle of winning national championships left and right. Lots of folks canceled their season tickets and vowed to never go to another Bama game or watch one. Again, this was while he was winning bigly like Bama fans expect and would normally elect him governor if we could. Thus, his blame-the-whitey message offended us bigly.

So at least here in Bama country, the libs didn't win the culture war and trick us into dropping something we enjoyed. They've done that with other fans of other sports -- sports the Dims adamantly tried to ban or cancel (remember the NFL concussion "scandal"?) but failed to cancel. So the Dims tricked Americans into hating the sports by putting all of the attention onto the few SJW's on the team. That dog don't hunt here in Bama country.

Let that be a lesson on how to win the culture wars.

She’s mad because the “F&^$&8=*n A-rab” is defending his business and won’t let them loot.

His life wouldn’t be worth diddly if he were on the ground and unarmed. They remind me of a pack of wolves, circling, looking for some weakness so they can move in for the kill.

I have heard more intelligible conversation from a pack of wolves than from those ........... things.

What language do they speak?