A host of corporate media outlets including CNN, The New York Times, The Washington Post, and MSNBC have participated in private dinners and sponsored trips with the China-United States Exchange Foundation, a Chinese Communist Party-funded group seeking to garner “favorable coverage” and “disseminate positive messages” regarding China, The National Pulse can reveal.

The relationship is revealed in the Department of Justice’s Foreign Agent Registration Act (FARA) filings, which reveal a relationship spanning over a decade between establishment media outlets and the China–United States Exchange Foundation (CUSEF).

The effort, according to the U.S. government report, aims to “to co-opt and neutralize sources of potential opposition to the policies and authority of its ruling Chinese Communist Party.”

“The United Front strategy uses a range of methods to influence overseas Chinese communities, foreign governments, and other actors to take actions or adopt positions supportive of Beijing’s preferred policies,” it continues.

This strategy appears to have been deployed in conjunction with outlets such as CNN, New York Times, and the Washington Post.

A 2011 FARA filing highlighted by Axios detailed CUSEF’s agreement with American lobbying firm BLJ. It outlines how CUSEF set out to “effectively disseminate positive messages to the media, key influencers and opinion leaders, and the general public” regarding China.

To do so, CUSEF targeted working journalists and journalist students:

In order to develop favorable coverage in key national media, BLJ will continue to organize and staff “familiarization trips” to China. This includes recruiting top journalists to travel to China, selected for effectiveness and opportunities for favorable coverage.

In 2009 alone, CUSEF generated 28 media placements as a result of its four journalist visits and BLJ secured “the publication of 26 opinion articles and quotes within 103 separate articles” on behalf of CUSEF.

“BLJ directly contributed to or influenced” an average of three articles “per week.”

While universities, including the University of Texas at Austin, have divested from CUSEF in light of its Chinese Communist Party ties, the same cannot be said for dozens of Western media outlets.

The same filing reveals that outlets including National Public Radio (NPR), The Atlantic, MSNBC, and Reuters had journalists visit China to meet with CUSEF officials.

Since then, filings continue to reveal a host of Western outlets attending private dinners and visiting China. Most outlets are included more than once.

In 2013, The Washington Post joined a China-bound journalism delegation, in 2014 Harvard Business Review also joined a delegation, and in 2015, the Los Angeles Times and The Huffington Post also visited the communist country.

A 2014 filing reveals that lobbying firm BLJ “arranged private dinners in New York and Washington DC on behalf of CUSEF” with over 20 attendees including The New York Times, The Washington Post, Reuters, Associated Press, BBC, and more: 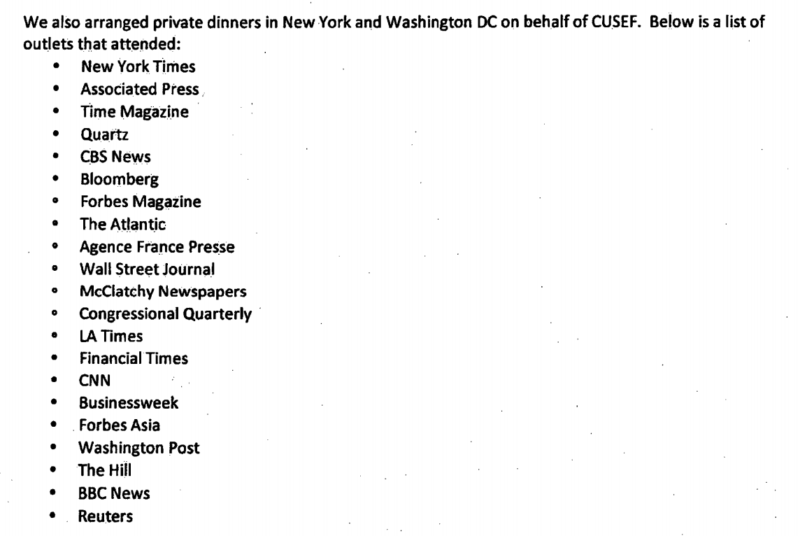 Images in CUSEF brochures shed light on the entities visited by journalists.

Between 2011 and 2013 images reveal journalist touring Huawei – a telecommunications firm labeled a “national security threat” and military collaborator by the U.S. government – along with Chinese military bases: 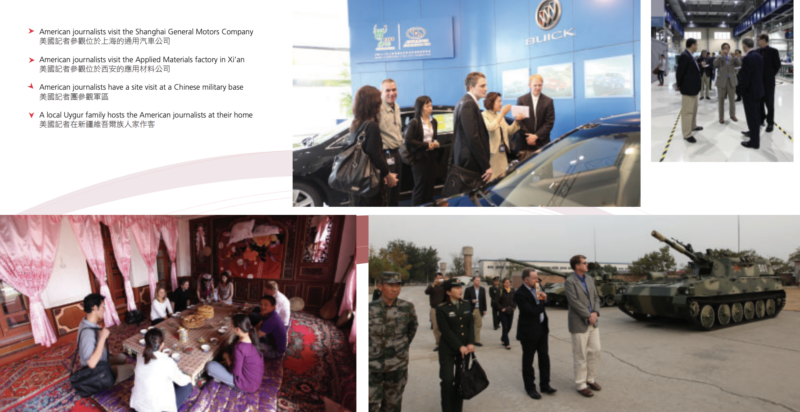 Following the ongoing pressure campaigns, CUSEF has escaped significant criticism in the corporate press. There have only been a few mentions in broader pieces concerning Chinese Communist Party influence operations on American college campuses.

Such behavior from news outlets implies a conflict of interest, or worse: that the ostensible news outlets have been bought off.

Even when CUSEF is criticized, such as in The Washington Post article “China’s reach into U.S. campuses,” CUSEF’s Executive Director Alan Wong was offered a rebuttal: something that even Americans on the political right fail to obtain from outlets such as the Post.

Vox, another outlet participating in CUSEF’s journalism trips, prefaced an article on President Trump and North Korea by noting author Yochi Dreazen “wrote it while on a trip to China sponsored by the China-United States Exchange Foundation (CUSEF)”:

The author of this article wrote it while on a trip to China sponsored by the China-United States Exchange Foundation (CUSEF), a privately funded nonprofit organization based in Hong Kong that is dedicated to “facilitating open and constructive exchange among policy-makers, business leaders, academics, think-tanks, cultural figures, and educators from the United States and China.” Vox.com’s reporting, as always, is independent.

As Foreign Policy magazine noted, to its credit, CUSEF is scarcely a privately funded non profit but rather is “a registered foreign agent bankrolled by a high-ranking Chinese government official with close ties to a sprawling Chinese Communist Party apparatus that handles influence operations abroad.”

The chicoms are patient and always play the long game.

6 posted on 12/29/2020 11:05:39 AM PST by ifinnegan (Democrats kill babies and harvest their organs to sell)
[ Post Reply | Private Reply | To 1 | View Replies]
To: SeekAndFind
This is very disturbing news. But for some reason this guy thinks it’s funny.

Enemedia living up to its name.

Look who has been colluding with this and other ChiCom groups for a long time. John Podesta and Democrat policy institutes.

On November 16, 2011, Jia Qinglin, Chairman of the National Committee of the Chinese People’s Political Consultative Conference, met at the Great Hall of the People with a delegation from the Center for American Progress headed by the organization’s president and CEO John Podesta.

Jia congratulated on the success of the 3rd “China-U.S. Dialogue” sponsored by Center for American Progress (CAP), Chinese People’s Institute of Foreign Affairs (CPIFA) and China-United States Exchange Foundation (CUSEF). He also appreciated the positive efforts made by the CAP to build up mutual understanding and friendship between China and the U.S..

Jia pointed out that the world today is undergoing profound and complex changes, the global economic situation is still grim, and international and regional hotspot issues and global challenges are emerging. China and the U.S. are the world’s largest developing and developed countries respectively. The sound and steady development of China-U.S. relations concerns not only the interests of both peoples and the world at large, but also peace, stability and prosperity of the world. China is ready to work with the United States to implement the consensus reached by the two heads of state, enhance dialogue, strengthen strategic mutual trust, expand mutually beneficial cooperation and properly handle differences and sensitive issues with the United States in order to promote the cooperative partnership.

“The Taiwan issue concerns China’s sovereignty and integrity of territory, affects the 1.3 billion Chinese people’s national feelings, and is the most important and sensitive issue in China-U.S. relations,” Jia said. He urged the United States to properly deal with Taiwan-related issues and attach importance to China’s concerns, which is conducive to steady and smooth development of China-U.S. relations.

Podesta said the Center for American Progress is ready to remain committed to conducting exchanges and dialogue with China and contribute to bilateral ties.

Now you know why the mainstream enemydia act like traitors - because they ARE!!

Why, now that you mention it ... By George that corruption stuff might just plain be all over the place.

Ahhhhhh, so the President’s bribes have not been big enough to get favorable coverage?

MSM media sells out for a little Sum Ting dinner.

A plate full of Sum Ting is better than any gift
from freedom loving America.\\

Oh how cheaply the MSM sells itself because it is run by Sum Dum Goy.

1996 : (US ELECTION — CHINESE MEDDLING) The Clinton-China Connection Goes Way Back, The Phyllis Schlafly Report (1998)
The China Connection Is the Real Scandal
Now we know why the Democrats were so vicious in their attacks on Senator Fred Thompson (R-TN) and Rep. Dan Burton (R-IN). Theirs were the committees that were closing in on the China connection, the scandal that can bring down the Clinton presidency, the scandal that has made Congressmen start to utter the T word (treason). A series of front-page news stories in the New York Times (May 15, 16, 17) essentially vindicated Thompson’s charge that the Chinese Communist Government tried to influence the 1996 U.S. election with campaign contributions.
Bill Clinton’s friend and ubiquitous Democratic fundraiser Johnny Chung told Federal investigators that he funneled nearly $100,000 from the Communist Chinese military to the Democratic campaign in the summer of 1996. The money was handed to Chung by the daughter of the top commander of China’s People’s Liberation Army, General Liu Huaqing, who was also one of the top five members of the Chinese Communist Party’s ruling Politburo.
Chung’s liaisons with the Clinton Administration were so cozy that he was able to arrange for the daughter, who goes by the name of Lt. Col. Liu Chaoying, to get a speedy visa and come to America to be photographed with Clinton on July 22, 1996. She is what is called a “princeling,” one of the privileged offspring of China’s ruling elite. In addition to her title as Lieutenant Colonel in the People’s Liberation Army, she is a senior manager and vice president for China Aerospace International Holdings, which is the Hong Kong arm of China Aerospace Corporation, a state-owned jewel in China’s military-industrial complex, with interests in satellite technology, rocket launches, and missiles.
Johnny Chung told Federal investigators that Col. Liu actually gave him $300,000, which she said originated with China’s military’s intelligence arm, and told him to use the money for Democratic campaign contributions. He apparently kept $200,000 for his “businesses.” Soon after the picture-taking fundraiser, Col. Liu had Chung open a California branch of Marswell Investing, another of her Hong Kong enterprises, whose chief “business” was parking Chinese money in the United States. She also invested $300,000 in Chung’s facsimile business. Chung was quite a hustler; he visited Clinton’s White House 49 times.
After fundraising investigations began last year, the Democratic National Committee returned $366,000 to Chung which were suspected of being illegal foreign contributions. Chung has pleaded guilty to campaign-related bank and tax fraud.

While over there, they were shown videos of their illegal activities that the chinese had. Wholly owned subsidiaries now.