Senate Minority Leader Chuck Schumer (D) warned that if the Senate confirmed Amy Coney Barrett's appointment to the US Supreme Court "generations yet unborn will suffer. Judge Barrett is inflexibly pro-life in her beliefs. I can't help fearing that somewhere down the road she will find some way to restrict a woman's God-given right to terminate the existence of her unborn child's life. Without access to the merciful option of preventing the live birth of her unwanted child, too many mothers will be forced into a life of servitude to a person who should never have existed. It doesn't take a great leap of faith to forecast the mental and physical abuse these 'rescued' children will face. How much suffering should we, as a nation, be compelled to endure because of the survival of people who were better off dead?"

Schumer went on to point out "the erosion of a woman's right to abort her unwanted children that we've seen in Republican-controlled states across the nation. Some states insist that if a baby targeted to die somehow survives the effort to kill her doctors must then render life-saving care. In other states, there are laws that require persons carrying out abortions to provide pain-killing drugs for the infant before they dismember her body. And perhaps the most diabolical of all, in some states expectant mothers must be given ultrasound images of their baby and wait 48 hours before having it killed. This hodge-podge of encroachments on the sacred act of abortion in state-after-state is anarchy. We must have a nationwide unified policy that secures abortion from any state infringements, limitations, or delays. Today we have a chance to move toward a unified policy if we only have the courage to reject this nomination. Let the incoming Biden Administration appoint a justice who can replicate the late Justice Ginsburg's unwavering support for abortion. In the dark years and decades ahead abortion may be a vital safety-valve for averting the ills of climate change. Let's preserve this option for the sake of our children by rejecting this unacceptable nominee."

Former congressman, Obama adviser, and Chicago Mayor Rahm Emanuel called Schumer's speech "eloquent and irrefutable. The Republicans will regret putting Barrett on the Supreme Court. Voters will be so enraged by their refusal to wait and let Biden fill the Ginsburg vacancy that a massive 'blue wave' will give Democrats a super-majority in both Houses. Then their worst nightmare will come true. The mandate for socialism will be unstoppable. Businesses will be expropriated. Wealth will be redistributed. Immigrants will be given voting rights. Behaviors will be controlled. Political controversies will be eradicated. Dissenters will be sent to camps to be reeducated. It will be, as Biden says, a dark era, but it will be glorious for Democrats."

Kanye West disagreed with both Schumer and Emanuel. "Abortion has killed more black people than COVID has," he pointed out. "Democrats have been hyping up a panic over the pandemic that purportedly has cost over 200,000 lives, but are totally cool with the more than 20 million black babies killed by abortion since 1973's infamous Roe v. Wade Supreme Court decision. Planned Parenthood was started by Margaret Sanger as a program to reduce the black population. Abortion is the worst tool of racism this country has ever seen. It has taken far more black lives than lynching ever did. President Trump understands this and wants to stop it. Democrats understand this, but want to keep doing it. If Barrett can help slow or stop the carnage, more power to her. Appointing her is a big plus for the President."

If you missed any of the other Semi-News/Semi-Satire posts you can find them at... 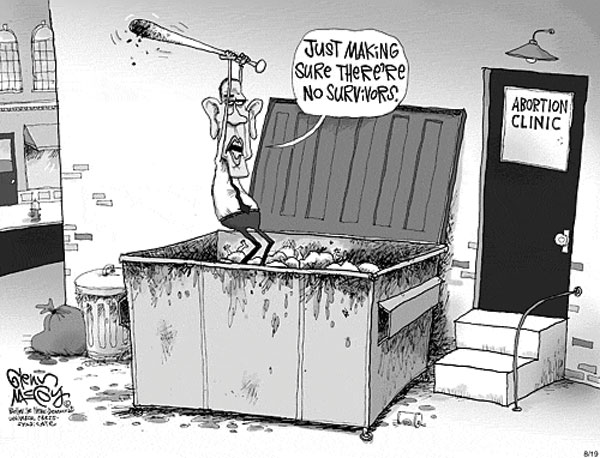 “I can’t help fearing that somewhere down the road she will find some way to restrict a woman’s God-given right to terminate the existence of her unborn child’s life.”

Because they weren't aborted.