Americans Are One Race with Members of Many Colors
Janitor's view ^ | June 9, 2020 | Reasonmclucus

Media are perpetuating racism by falsely claiming color divides us into different races.

Jesse Washington has reported that many dark skinned Americans recognize that they are not "African" Americans in spite of what some racists say.

The term "African-American" perpetuates the principle tenet of Southern racism: "part black, all black" under the "one drop rule".

The media in particular apply the term indiscriminately to any American with a dark complexion. For example, they call golfer Tiger Woods "African American" even though his ancestry is predominately Asian. His mother is Asian and his father had Asian as well as African and American Indian ancestors.

Dr. Martin Luther King dreamed of a day in which color would not be important. Unfortunately, the media along with many politicians and black leaders are still preoccupied with skin color.

As the Lakota say, Aho Mitakuye Oyasin (We Are All Related) regardless of the color of our skin.

The fact that a person has dark skin doesn't mean a majority of ancestors came from Africa. Dark skin only means a person received one or more of the half dozen skin color related genes that produce "black" skin from an African ancestor. For example, dark complexioned singer Eartha Kitt told talk show host Dick Cavett that her father was white and her maternal grand father was Cherokee.

Some of the genes associated with dark complexion are also present in persons from other parts of the world, especially India and Australia. The versions of the skin color genes that cause dark skin are dominant genes which means if a person has a dark version of the gene, complexion will be dark even if the other gene is associated with light skin. Incidentally, the African gene pool includes the albino gene which means some residents of Africa have pale skin.

Calling black Americans African-Americans denies them the opportunity to claim their European (especially Irish) and North American ancestry. The first Africans in the English colonies worked with the Irish in the fields and occasionally became sexually involved with them. In some cases planters deliberately forced Irish women to have children by African men to produce children of a desired complexion. Later, Irish overseers and plantation owners sometimes offered favors for sex or just raped slaves.

Until the 1960's Southern white men could rape black women without fearing punishment. Some black women voluntarily had sex with white employers or their sons. Former Sen. Strom Thurman fathered a daughter by his parent's 16-year-old housekeeper when he was a young man. Young southern women were told that if their good night kisses were too passionate, their boyfriends might seek sexual satisfaction in the black community.

A test of the "Y" chromosome of Martin Luther King III indicates that he and his civil rights leader father Dr. Martin Luther King, Jr., had a north European male ancestor like about 33% of black American males.

The Spanish who established colonies in South Carolina, Florida and Georgia in the 16th Century using African slaves were less likely than the British to bring wives and instead used their slaves for sexual satisfaction. The French in Louisiana also had a shortage of white women. The French, unlike the English, even used terms indicating the proportion of African and European ancestry.

African slaves of the Spanish started a long association with the original inhabitants of North America that continued in the British colonies. The Africans left behind when Spain withdrew from Florida joined with the Seminoles. In the English colonies the Cherokees and some other tribes socialized with the Africans, gave refuge to runaway slaves or had African slaves of their own.

Many white Americans, including former President Warren G. Harding, have African ancestors. Some believe as many as four other white presidents had African ancestors. After the "Roots Miniseries" many whites who researched their family histories were surprised to find ancestors who served in the military who had a "C" after their names for "colored".

Most whites with African ancestors probably don't even know it because their African ancestors whose skin was light enough to pass for white covered up their past. It would only take a few generations of people with mixed parentage to have descendants with skin light enough to pass for white. If only one gene were involved, the math of inheritance would indicate that if two parents each had one black parent and one white parent approximately 25% of their children would have white skin. The math is more complicated with the involvement of multiple genes, but the probability of some light skinned children increases with each generation.

Racists sometimes suggest that black males have a greater propensity for violence especially against women and falsely ascribe that characteristic to their African ancestors. If some black men actually have a genetic tendency to commit rape and murder it would be far more likely that they inherited the gene from a white male ancestor who raped one of their black female ancestors than that they inherited it from an African male ancestor.

Another popular stereotype is that blacks have "rhythm" which they are supposed to have inherited from their African ancestors. Although the slaves' African heritage would have influenced their music, it seems more likely that the social and biological association with the musically oriented Irish would be more responsible for the black emphasis on music. The Irish responded to the repressive treatment by the English through musical expression. They would have passed that tradition along to the Africans whom they initially worked with as "indentured servants" and later supervised after black slavery was established. The slaves blended their Irish and African traditions with their own situation. They concentrated on expressing themselves through music because their oppressors didn't allow other ways to "fight" their situation. Watch Irish groups like Riverdance and Celtic Woman and then say that black Americans could only have gotten "rhythm" from African ancestors.

The first African "servants" arrived in Jamestown in 1619 only 14 years after the founding of the settlement. During the two centuries of the Atlantic slave trade only about 500,000 additional Africans were imported into North America. Britain led the way to ending the Atlantic slave trade in 1807 and the United States quickly followed to outlaw the importation of slaves without prohibiting the internal slave trade. Thus, the vast majority of the 4.5 million blacks living in the U.S. in 1860 were born here to parents and grandparents who were born here. A substantial portion had at least some ancestors who were living in North America at the time of the American Revolution.

It's time we recognize that the only African ancestors of the descendants of slaves arrived here centuries ago. We need to recognize that those dark skinned Americans whose ancestors were slaves are just as deserving of being called regular Americans as those of us with light skins without any modifier that segregates them from the rest of us. Americans with dark skins should be allowed to claim all of their ancestors, not just those who provided the genes responsible for their skin color. Those of us with light skins need to accept the possibility that many of those with dark skins are our distant cousins. Those of us whose ancestors arrived here a couple of centuries ago or came from the British Isles, especially Ireland, likely had relatives who had sexual relations with the descendants of Africans. We could also have ancestors who came from Africa. Those whose ancestors have lived in the south for several generations, especially if they have dark naturally curly hair, could easily have an ancestor who passed for white at some time in the past.

Americans need to recognize that color is only skin deep. It doesn't totally define us.

Glad I read this essay. I was so afraid it was the other way around.

Having a hard time trying to find where to post t his,m it might be the best. 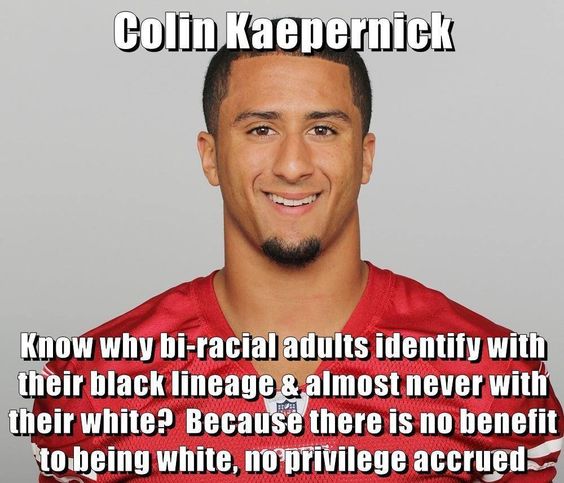