Will Democrat Divisions Set Milwaukee On Fire?
The Revolutionary Act ^ | 01/30/19

And the fuse may be lit in Milwaukee.

The Democratic National Convention to nominate their presidential candidate is being held in Milwaukee this year — Wisconsin being a state they desperately need to flip back from President Trump.

As the party apparatus, which clearly includes much of the mainstream media, ramps up to squash Sanders’ candidacy, true-blue supporters are seething. They watched how the Democratic Party stacked the deck with Super Delegates to push Hillary Clinton past Sanders in 2016 and saw the old Socialist endorse her and play nicely. But a chunk of them stayed home on election day.

They now feel that although the party changed the rules on Super Delegates, the party is still tilting the field toward Biden, and the media is piling on to both protect Biden (which of course is partially Trump-related) and to undermine Sanders. Same song, second verse.

And the Bernie Bros are furious, not intending to sit idly by this time and be content to just stay home. They’re pointing directly at Milwaukee.

James O’Keefe has done yeoman’s undercover work again, releasing videos of two Bernie Sanders’ staffers, at separate times in separate cities, talking about violent revolution, arming up with guns, beheadings and so on.

South Carolina Bernie Sanders Field Organizer known as @martinthemanic wrote on Twitter: “I’ll straight up get armed…I’m ready for the “f**king revolution”; “Guillotine the rich”; ‘send Republicans to re-education camps’.” He has since deleted his Twitter account.

Kyle Jurek, Sanders Iowa Field Organizer said Joseph Stalin had legitimate reasons to use Gulags, and claimed that they were “better than what the CIA has told us they were.” A straight up apologist for a brutal Communist mass killer.

Jurek further said that “there are things more important than the Rule of Law in the United States, when it comes down to the existence of the human race.” He said he has been part of Antifa and that “a lot of them are probably on the Bernie Campaign.” That’s a giant red flag given Antifa’s go-to move is masked violence en masse.

O’Keefe reports that cells of Bernie supporters are organizing online and if they feel screwed again by the Democratic Party, they threaten that “Milwaukee will burn.”

Jurek says: “If Bernie doesn’t get the nomination or it goes to a second round at the DNC convention, f***ing Milwaukee will burn,” Jurek warned. “It’ll start in Milwaukee and then…when the police push back on that, other cities will just f***ing (blow up sound).”

This is more than just two guys. The connection to Antifa and the 2017 shooting up of Republican members of Congress at a softball practice by a Bernie supporter suggests that his campaign is attracting the radical and violent revolutionaries that might be more than talk. We’ve seen Antifa and other leftist organizations organize online with great success.

While Sanders does not call for violence and publicly opposes it, his actions are not nearly so clear. He has cuddled up to every bloody Communist dictator from the Soviet Union to Cuba to Nicaragua to Venezuela. He uses the term “revolution” regularly and is himself a radical by any American standard. And remember that Sanders has never taken back any of his statements of support for those dictatorships — and naturally our watchdog media has not questioned him on these points.

As Sanders gains more momentum, leading in the polls now in Iowa and New Hampshire and close in Nevada and South Carolina, he has become the odds-on favorite in Vegas now to win the nomination. That has the Democratic Party’s powerbrokers terrified. Not only do they not buy a lot of his love of communism, but they see him as the Democrat least likely to beat Trump — and they are assuredly right.

This unfolding dynamic means that the party and its adjunct publicity arm in the media is going to push back hard on Sanders. And it’s an easy push. He’s always been a radical communist who’s never accomplished a thing and was nailed by CBS anchor Norah O’Donnell for not having any idea how much his programs of freebies will actually cost.

The takedown should not be that hard, if the Democrats have the spine. )The GOP certainly will if he is the nominee.)

This all points to dynamite in Milwaukee on the scale of the Chicago 1968 Democrat Convention fiasco.

Either that or the Burny supposters.

The Commie Bernie crowd is going to lose their minds and their cool when Hillary is named the Nominee again.

Hillary is almost in the grave; she won’t be chosen (she lost one that was handed to her on a silver platter), and too much dirt came out - from DEMOCRATS - about her after losing in 2016.

Too many Dems don’t want Independent Sanders as the candidate, though - so there will be a fight.

Regardless of all other political differences, at its most basic, the Dem problem is the identity politics which served them well in the past are now hurting them. There are only two slots on the ballot, and they can’t fit all of the various ethnic/gender/pervert groups they’ve pandered to in the past.

Actually outside of Hillary’s mind and the Clinton Inner circle bots, I don’t see any support in the MSM or the Democrat Base for Hillary.

The Abortion supporters are backing the Fake Indian.
The radicals are backing Bern the Communist.
Wall Street is backing Biden or Bloomberg.
The West Coast is backing whoever seems to be able to win (which is no one right now)

But, it's okay. Learn from our mistakes.

9 posted on 01/30/2020 6:34:44 AM PST by Texas Eagle (If it wasn't for double-standards, Liberals would have no standards at all -- Texas Eagle)
[ Post Reply | Private Reply | To 1 | View Replies]
To: Liberty7732
the mainstream segment of the party represented by Joe Biden and Hillary Clinton,

Only if by "mainstream" they mean the few dozen or so white folk still stupid enough to think Dems are the "party of the working man."

I’m old enough to remember the 1968 Democrat convention. If there is a brokered convention, 1968 will look like a love fest compared to the violence that will ensue in Milwaukee.

Maybe if butt boy Pete put on blackface and a skirt...

You are correct. I’m sorry for my brothers and sisters in Milwaukee, but the violence and destruction in Milwaukee if the rats screw Bernie again will strongly redound to the benefit of the Republic by guaranteeing Trump’s re-election.

What about the Hispanics? Asians? White women (if he’s a black one)?

They’ve painted themselves into a corner... 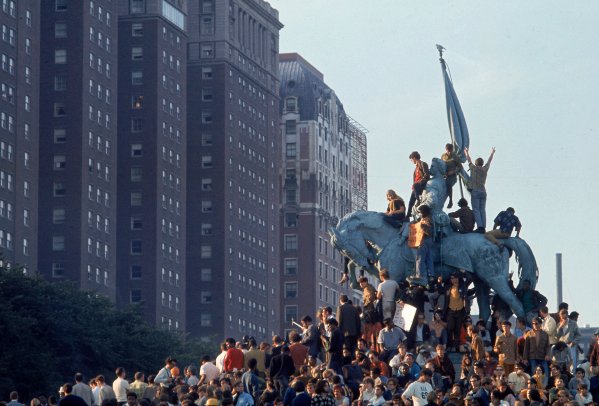 I honestly can say that I admire the sentiment. I've been waiting for 28 years now for the current crop of 'kids' to come home from that god-forsaken Sand Box in the middle east. :( (I was mobilized for ODShield/Storm in 1992.)

Cops used billy clubs in those days and a whole bunch of democrat scum got hickory noogies for their efforts.😎