Just when it seemed as though the transgender movement was reaching a fever-pitch and it was becoming impossible to stand up to the zealous mob of trans-enthusiasts, it appears some celebrities may have found the secret to shutting them down and evading the dreaded “cancel culture” imposed on anyone who dares speak truth or reason. Perhaps this culture battle is not all but lost after all.

Back in December, famed author J.K. Rowling tweeted her support for Maya Forstater, a former tax expert who lost her job at think tank Center for Global Development for declaring that men and women do not just get to be the opposite sex simply because they say so.

As we reported, Forstater’s appeal to an employment tribunal was rejected by a judge who stated that her views have the potential to cause “enormous pain” to transgender persons. Her views and the view of the majority of sane, rational people, were “not worthy of respect in a democratic society,” according to this judge.

This lunacy seems to have struck a chord even within the staunchest progressives. Rowling, a well-known liberal, was sent over the edge at the ruling and took to Twitter to point out just how ridiculous the whole thing was, and effectively pointing out the insanity of the entire transgender takeover of society.

“Dress however you please,” Rowling wrote. “Call yourself whatever you like. Sleep with any consenting adult who’ll have you. Live your best life in peace and security. But force women out of their jobs for stating that sex is real? #IStandWithMaya #ThisIsNotADrill.”

Maybe the way to clarify questions about gender is to allow people to use a “genderbender” gender. Just judge my gender based on the type of clothes I’m wearing that day.

I found that saying I didn’t care nor need to hear about anybody’s fetishes usually ends the discussion with seminar arguement leftists.

Sex is a function of biology.

All this gender crap is about the way people think about their sexuality. It is a small subset of sexual fetishes, not a physical difference as sex is.

Forcing them to try to remove transgenderism from fetishes like infantilism or sadomasochism or maid play etc. so that they can claim it is equivalent to a physical difference pretty much ends the argument early. And they never get to their subsequent talking points.

It begins with people simply stating that Political Correctness is oppression.

I’d like to agree, but can’t. The trans people won’t give up easily. Besides, there are thousands of lawyers hoping to take on a case and extract millions from normal, innocent people who think bathrooms should be based on plumbing. 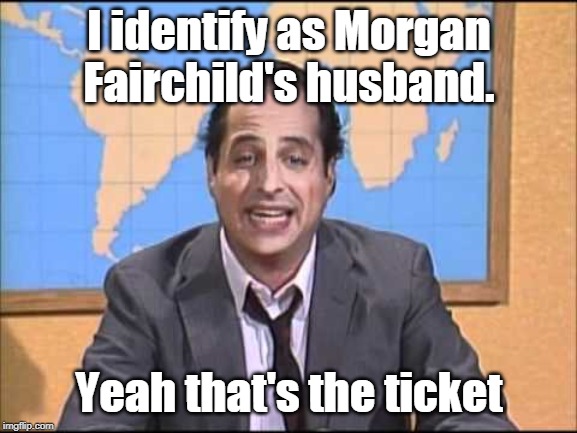 9 posted on 01/08/2020 1:05:45 PM PST by va22030
[ Post Reply | Private Reply | To 4 | View Replies]
To: Tolerance Sucks Rocks
Back in December, famed author J.K. Rowling tweeted her support for Maya Forstater, a former tax expert who lost her job at think tank Center for Global Development for declaring that men and women do not just get to be the opposite sex simply because they say so.

Transgenderism is an assault on a rational metaphysics, epistemology, and ethics. This irrationalism by leftard loons includes the rejection/lack of:

- law of existence = it is OK to believe that what is real does not actually exist, and what is not real does actually exist
- law of identity = it is OK to believe that objects of reality are not what they actually are
- law of noncontradiction = It is OK to have a belief that contradicts reality
- primacy of existence = it is OK to believe that consciousness can create reality, and that reality can be altered by emotions, whims, and wishful thinking.
- objectivity = beliefs do not have to correspond to reality to be true
- reason = emotions can be a means of knowledge of reality
- absolutism of the metaphysically given = reality can be rewritten
- virtue of rationality = reality can be evaded
- virtue of honesty = reality can be faked
- self esteem = unable to deal with reality
- metamodel of NLP = distortion, deletion, erroneous generalizations of reality does not matter
- virtue of independence = acceptance of unreality based on dependence on groupthink and social metaphysics
- virtue of integrity = one can be disloyal to objective knowledge of reality, and permit a breach between one’s body and mind, and then act in accordance with one’s disloyalty.

For leftard loons, this is the type of unacceptable irrational mentality and pathological mental illness that allows a man to incorrectly think that he is really a woman and vice versa. No rational person with high self esteem could accept this type of thinking as normal.

This transgender lunacy is killing women’s athletics. Males who identify as women are winning athletic competitions against biological females and soon will be claiming athletic scholarships at colleges and universities. The Olympic will be next. Nothing would give me more enjoyment than to see the US women’s soccer team, especially that purple haired leabian Megan Rapinoe, trounced by a team of men who self declare to be women.

I plan to not watch transgenders compete against their opposite sex in the Olympics. I wonder if they’ll have (transgender) fake women compete in gymnastics?