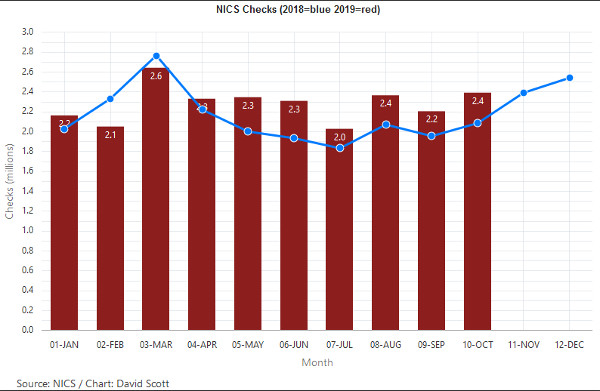 The National Instant background Check System (NICS) for October, 2019, showed record levels of background checks. The previous record for October was in 2016, during the presidential election, when many thought Hillary Clinton would be elected, would appoint at least three hard core Progressive Leftist judges to the Supreme Court. Those justices would be expected to reliably lie to Congress to be confirmed, then violate their oaths of office, and reverse the Heller decision. Second Amendment rights would be gutted.

It did not happen, but it was a tremendous incentive for people who thought they might want a gun to purchase one. October, 2016 set the all time record for NICS background checks for the month: 2,333,539 total background checks. The number, less the 1,221,917 permit checks and rechecks, becomes a good proxy for the firearms sold in the month: 1,105,323.

The firearm sales proxy for October, 2019 shows a new record with an increase of six percent.

Record level sales are not much of a Trump Slump.

The United States has reached a new normal for firearm sales, fueled by Barack Obama's administration and the aggressive push for more and more restrictions on firearms ownership and use, pushed by the legacy (progressive) media, social media, and billionaire dollars from Michael Bloomberg, Bill Gates, Oprah, Paul Allen, Steve Ballmer, Rupert Murdoch, and George Soros, according to an article in Forbes from 2016.

Second Amendment activists and a hundred million likely American gun owners, have actively fought back, with the aid of the NRA-ILA, the Second Amendment Foundation (SAF), Gun Owners of America (GOA), and numerous smaller groups and state organizations.

It has been a David and Goliath fight, with Second Amendment supporters battling extreme odds in massive funding by the Billionaires, massive free publicity by the legacy (Progressive) media, and hostile federal appeals courts populated by Progressive judges. A 100 million potential voters have a weight beyond mere money and media access.

The ongoing fight has publicized political concerns about gun ownership as never before.  Candidate Robert Francis (Beto) O'Rourke publicly called for confiscation of AR15 type rifles, as well as any other semi-automatic firearms designated as "assault weapons" in some future law.

The weak response from the rest of the Democrat field seemed to castigate him for going too far, at this time. A prominent Progressive personality on the view told him to keep such plans secret until he was elected.

The publicity, along with large supplies of firearms at historically low prices, has fueled the buying spree.

The Supreme Court, doing its job, seems the most likely course. When gun laws have been reformed, and Second Amendment rights restored, crime has either remained the same or dropped.

I predict near record high levels of firearms sales to continue through the 2020 election cycle.


©2019 by Dean Weingarten: Permission to share is granted when this notice and link are included.

This will never show up on the phony media polls.

For every phantom/fantasy woman changing their vote against Trump, there are thousands of real women buying guns since 2016:

There are thousands and thousands of women, who bought guns or had their man buy them a gun for protection, who probably didn't vote for Trump in 2016.

So these women buying guns in record numbers are going to vote for a gun grabber instead of President Trump? Get real!~ 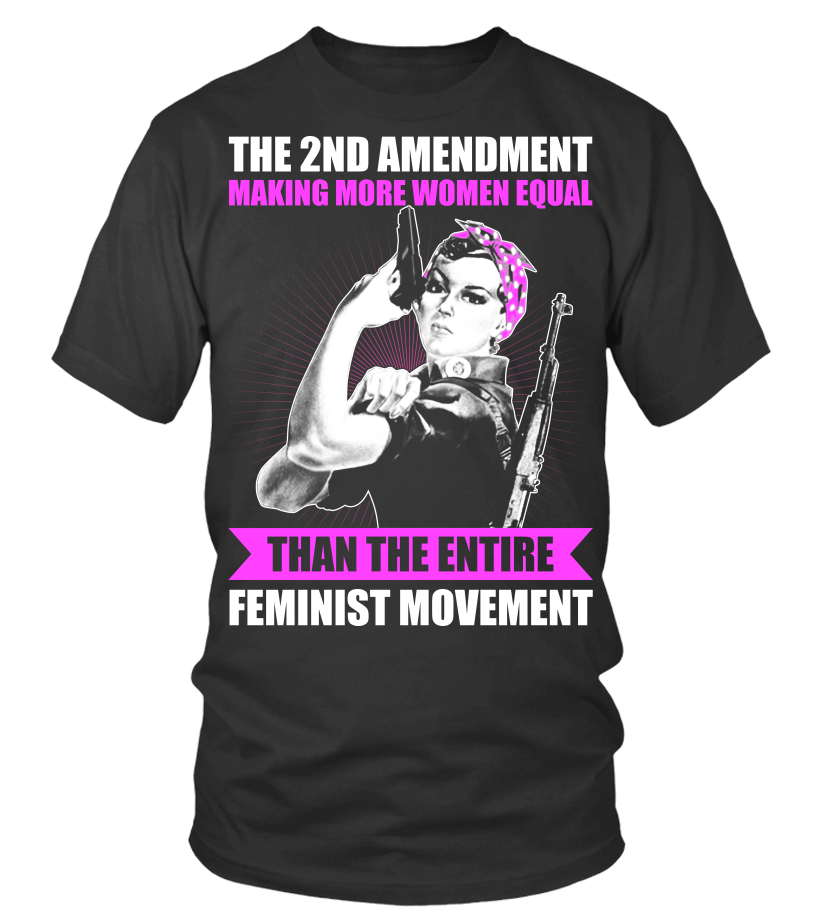 —I am curious as to the breakdown between handguns , rifles and shotguns, suspecting that handguns make up the bulk of purchases—

—Hopefully , great numbers are for AR and Ak and “sniper” type rifles—

—(bigger percentage on the long guns than I would have guessed)—