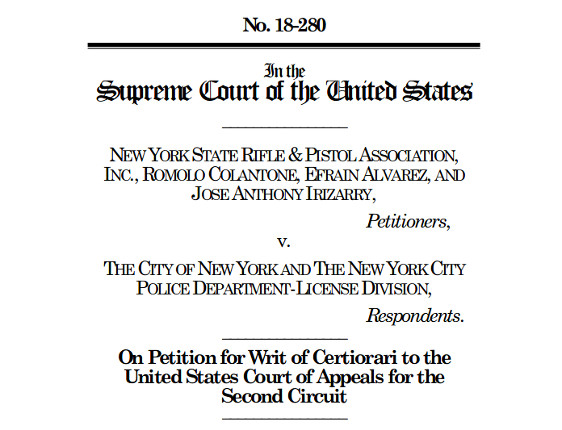 On 1 October, 2019, the Supreme Court held a conference. One of the items to be decided was whether the Court would hear the Second Amendment case of NY STATE RIFLE & PISTOL V. NEW YORK, NY.

The Supreme Court had already granted Cert (agreed to hear the case). But the City of New York, fearing a poor outcome, had minimally changed the regulation, and lobbied the State of New York legislature to minimally change the law. Then the counsel for the City filed a petition with the Supreme Court, claiming the case was moot, there was no longer any valid reason to pursue the lawsuit.

The plaintiffs disagreed. They argued the changes were minimal and done to evade adhering to the Second Amendment.

The Supreme Court web site shows the  New York case as being scheduled for oral arguments on 2 December, 2019.  This may simply be part of the Court's administrative procedures. The court is the smallest of the three branches of the federal government. It is jealous of its power. The court guards its inner workings from the public view.

There are several cases important to the Second Amendment working their way toward a Supreme Court decision. Many of the lower courts have been hostile to restoring Second Amendment rights.

The lower courts have refused to protect the right to keep and bear arms outside the home.

The lower courts have refused to protect the right to keep and bear commonly owned rifles, magazines, and accessories.

The lower courts have refused to protect the commercial sale of arms, and the private sale of arms.

The lower courts have done this with sophistry and the changing of definitions to prevent the exercise of Second Amendment rights.

Many believe the Supreme Court did not accept these cases, because neither the originalists and textualists on the Supreme Court (Thomas, Scalia, Alito, and Roberts) or the "living document" progressives (Ginsburg, Breyer, Sotomayor, and Kagan) could depend on what the swing vote, Justice Kennedy, would do. So, they mostly did nothing for ten years.

Justice Kennedy has been replaced by Justice Kavanagh.  With Justice Gorsuch replacing Justice Scallia, the originalists and textualists should have a working majority.  Justice Roberts appears to be stepping into Justice Kennedy's role as a swing vote, but the swing has moved a bit toward originalist thinking.

Other cases likely to come up, depending on what happens with the New York Case, are Rogers v. Grewal,  Cheeseman v. Polillo, and Remington v. Soto.

Remington is about the protections afforded by the Protection of Lawful Commerce in Arms Act, the PLCAA. Remington is scheduled for the conference on 11 October; the Court may decide to hear the case at that conference.

Rogers is about the carry of arms outside the home in New Jersey, as is Cheesman, but from a bit different angle.

Cheesman is scheduled for the 18 October, 2019 Supreme Court conference, which will likely determine if the court will decide to hear the case.


Some writers believe the Democrats have pushed the Court too hard, with barely disguised threats to pack the court.

The odds are we will know if the Court will hear oral arguments in the NY STATE RIFLE & PISTOL V. NEW YORK, NY. case Monday morning, the 7th of October, 2019.


It is difficult to know what the Supreme Court will do, particularly in Second Amendment cases.

Gun Watch TOPICS: Government; History; Politics; Society
KEYWORDS: 2ndamendment; banglist; newyork; nra; secondamendment; supremecourt
Correctly predicted the court would address mootness of the NYSR&P Second Amendment cast on 7 October. This article was sent for publication on 3 October. Due to a variety of issues, it wasn't published until 7 October.

Gun watch could not publish it until 8 October, which was 9 October in Australia.

Tomorrow I should be able to publish the article where the court decided to go through with oral arguments on the NYSR&P case, on 2 December.

The Respondent's Suggestion of Mootness is denied. The question of mootness will be subject to further consideration at oral argument, and the parties should be prepared to discuss it.

I suspect, because of the court’s treatment, the case will not be found to be moot on 2 December.

This is a good sign for Second Amendment jurisprudence.

Did anyone backdate the document? /s

And also a good sign for fans of unintentional comedy. Like the drug warriors in the case of Tyson Timbs, I expect the gun warriors to have to stand there while some Justice makes the whole room laugh at their arguments.

That is what I am hoping for.

If the pattern holds, something is going to happen again soon.
Every time we steer closer towards more second amendment liberties, some jackass decides to shoot up somewhere.

I can’t be the only person who sees this.