Boy, here’s a shocker, huh? – Footage from a camera stationed outside the cell in which pedophile and longtime pal of the Clintons Jeffrey Epstein mysteriously died a few weeks ago has been deemed as “unusable” by federal investigators. Oh, golly, how surprising that is.

Ok, it’s not surprising at all, is it? Seriously, this is like a bad episode of Jake and the Fat Man at this point. Was there anybody with a functioning brain still out there who did not fully expect to read this report at some point soon?

Hey, here’s another question someone at our Department of No-Justice should answer: Why has it taken so long for this “news” to be made public? Epstein was found dead in his cell 17 days ago – are we now being asked to believe it took that long for those eagle-eyed FBI guys to actually think to review video footage? How obvious is it that the real answer here is that the FBI no doubt reviewed the video evidence as a first step, but waited until public attention on the case had died down before letting this crucial piece of information out to the press?

The other little bit of news in the Washington Post story linked above is this:

Prosecutors have since moved to drop the charges against Epstein – although they continue to investigate those who might have conspired with him. A federal judge has scheduled a hearing for Tuesday to consider the matter and has indicated that those who say Epstein victimized them will be allowed to speak in court.

Well, of course. You can’t prosecute a very conveniently dead man, now, can you? But gosh, isn’t is just so sweet that a few of Epstein’s thousands of victims will be allowed to “speak in court?” I’m sure that will make it all better for them.

As for this nonsense about prosecutors continuing to investigate Epstein’s conspirators, well, we can’t help noticing that Ghislain Maxwell continues to just fly all over the world, free as a bird, or perhaps free as Hillary Clinton and James Comey and Andrew McCabe and Peter Strzok and on and on and on.

The big question in all of this and so much more is, when will Attorney General William Barr do something real, something other than talking a good game, something to prove that he is a real AG and not just the second coming of Jeff Sessions?

Well, a golden opportunity to do so just landed in his lap. Useless apparatchik U.S. Attorney Jessie Liu decided she just can’t decide whether or not to prosecute Andrew McCabe for his serial leaking of classified information and lying about it to superiors within the DOJ. Thus, that decision will now be made at DOJ headquarters in Washington, DC.

Here is your moment, Mr. Barr. You have a suspect whose internal behavior was so poor so frequently that he merited the conduct of a full-fledged Inspector General investigation, the report from which was issued way back in April, 2018. That report was so disturbing that even the otherwise feckless Sessions decided to fire McCabe. It also contained criminal referrals for McCabe’s repeatedly lying to investigators and superiors at the FBI and DOJ, the same alleged crimes for which Special Counsel Robert Mueller prosecuted and threw several people in jail during the course of his Witch Hunt.

Here is a chance for Mr. Barr to conclude a process for so long that at least one U.S. Attorney quit her job over the slow pace of the decision-making by Liu and others. From the New York Times report:

…[the case]… has been under investigation for so long that the term expired for the grand jury hearing evidence. One of the lead prosecutors, Kamil Shields, was unhappy with the lengthy decision-making process and has since left the Justice Department for private practice. Ms. Shields declined to comment.

This is a case into which a real, decisive Attorney General would step and do the right thing. It’s a clear and unambiguous opportunity for William Barr to demonstrate that the two-tiered system of justice that existed in our country for the 24 years before Donald Trump took office will come to an end under his watch.

If Andrew McCabe is allowed to skate and go onto become wealthy thanks to his benefactors at CNN, then we all should forget about any of the bad actors who tried to fix the 2016 election and mounted a failed coup d’etat against a sitting President of the United States ever seeing anything resembling “justice.”

For William Barr, the time for choosing has arrived.

Barr had his mind made up for him long ago. It was a prerequisite for the job.

I’ll give it time, but it’s starting to look like Barr is Trey Gowdy II.

AND...many others helped make up William Barr’s mind. Our rule of law is no more. The Global elites have stolen the Country for good if no indictments of McCabe and Comey and others don’t happen.

Just my humble opinion but if Barr lets the coup conspirators off it is the end of the USA. No one will ever again accept the result of an election making Trump the Last President. There will be a movie someday like “The Last Emperor.”

Ironic, but I just bought my grandson a Trey Gowdy Action Figure. Nothing moves except the mouth.

9 posted on 08/27/2019 5:22:21 AM PDT by gibsonguy
[ Post Reply | Private Reply | To 3 | View Replies]
To: EyesOfTX
FTA: "It’s a clear and unambiguous opportunity for William Barr to demonstrate that the two-tiered system of justice that existed in our country for the 24 years before Donald Trump took office will come to an end under his watch."

Excellent article, thanks for posting.

I’m reasonably certain that none of these aparatchiks have any idea just how pissed off a very large number of Trump voters are about the blatant in our faces double and triple standards. This isn’t a few cranks rolling around on the edges but literally millions of people.

Most of us here on FR have known it for years but now only the willfully blind can’t see it. Our nation simply can not tolerate a two or three tiered “justice” system and survive.

Prosecutions must happen no matter what the cost. These people attempted the first coup in American history. And if it weren’t for those millions of people who put President Trump in office they would have gotten away with it.

That cannot be allowed to stand.

12 posted on 08/27/2019 5:32:03 AM PDT by Lurker (Peaceful coexistence with the Left is not possible. Stop pretending that it is.)
[ Post Reply | Private Reply | To 2 | View Replies]
To: wastoute
"Just my humble opinion but if Barr lets the coup conspirators off it is the end of the USA. No one will ever again accept the result of an election making Trump the Last President. There will be a movie someday like “The Last Emperor.”"

Yes, indeed. If the coup plotters get away with this, it invites future coups. The 2020 ballot box could soon be followed by the parable of the boxes.

I’ve heard much praise of Mr. Barr. Still waiting for him to do something to help me believe it.

Not long ago people were saying Mueller was a stand-up guy, and before that, Comey was the soul of integrity.

In the meantime, all the players in the attempted coup d’etat of a US president are still walking around free as Bill Ayers, and most of them still cashing their paychecks too.

Without the confidence of the people, Mr. Barr, it all falls apart. Do your job.

Lie needs to find a new job far from the halls of justice.

I would respectfully disagree with the comparison.

Members of Congress have no ability to prosecute crimes. All they can do is shine a light on corruption, malfeasance and criminal behavior. It is up to the DOJ to prosecute...that is their job.

FTA: "The big question in all of this and so much more is, when will Attorney General William Barr do something real, something other than talking a good game, something to prove that he is a real AG and not just the second coming of Jeff Sessions?"

EyesOfTX has it right...is Barr morphing into Sessions?

And do we notice that trump doesnt care what happens to the conspirators? The witch hunt is over. The courts are upholding his agenda. That is the deal. 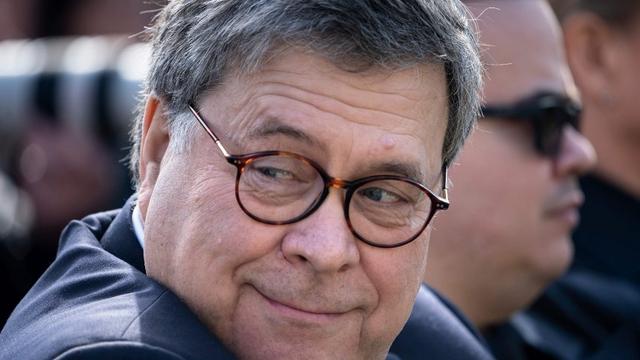 What honestly concerns me is that they are stuck in a position where they really can’t pursue this because, if they did, it would have the real effect of bringing down our entire government.

No matter which party you are on, and no matter how much you want to protect the rights of individuals, there are times when, for the country to survive, sacrifices have to be made - even involuntary ones.

I’m not saying that is what is going down here, but when people’s actions don’t seem to make sense, it means they are doing what they are doing due to knowledge and motives that we are not privy to.

That was supposed to be Liu