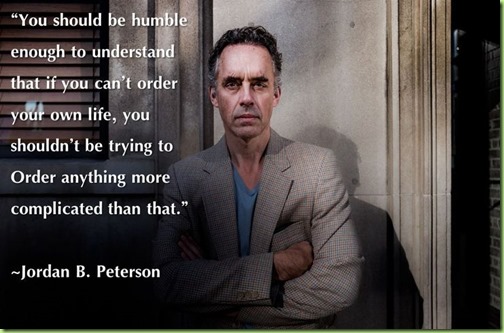 In the event you haven’t seen this yet I highly recommend Caitlin Flanagan’s article in The Atlantic, an otherwise deplorable publication: Why the Left Is So Afraid of Jordan Peterson.

These are people who aren’t looking for an ideology; they are looking for ideas. And many of them are getting much better at discerning the good from the bad. The Democratic Party reviles them at its peril; the Republican Party takes them for granted in folly.

If you’re “looking for ideas” the Left’s got nuthin’ to offer these days.

— I’m sorry the man’s premise is just off.

The Left has all sorts of ideas about what they want to do, identity seems to be just one part of it.

With regards to only the title, I fully agree.

As Rush says, they are the party of hate. They do not want to see anyone prosper or be happy. A true lib looks unhappy, is unhappy and is easily agitated. They are truly a miserable lot that want to spread their misery by imposing it on others.

They are emotionally driven, easily misled by others. When confronted by logic they literally come unglued and will use shouting to counter logic, maybe even violence.

As many others here on FR have stated, they are mentally ill.

I’ve had an attorney for 15 years that your description above fits. We met two hours yesterday at 400 per hour. He’s an unusual liberal though in ways. One example is he is a big hunter. Another is he is 56, another is he was born and raised in Texas. My point is that after 15 years, to maintain our mutually successful relationship, we’ve found that many subjects are just out of bounds because, like u say, he will just immediately get pissed off and incoherent when you throw a fact at him like ALL the most dangerous/lethat cities are run by Democrats. He starts babbling and frothing at the mouth on that little gem. 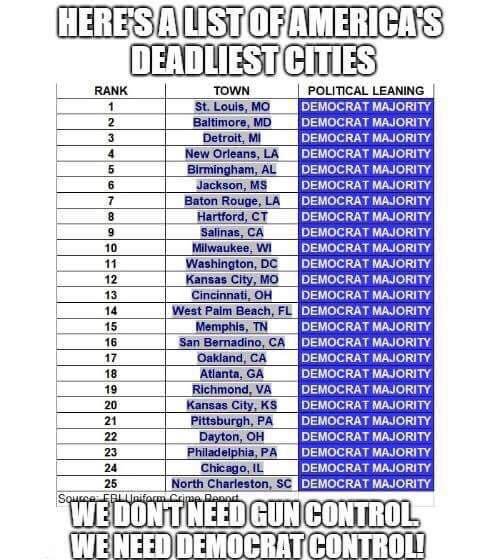 Excellent chart. That tells a story...

I don’t think the Atlantic story you cite is a must-read except as another example of how the Left twists the truth.

Not a single Peterson argument is presented at all. The attitude of the writer is: watch out, there’s a clandestine web of students who subversively are following this man’s philosophy.

Then the author casually mentions something about “enforced monogamy” to illustrate how whacko Peterson is — a comment taken out of context. It’s the poison pill we’ve come to recognize in any “fair” story by Leftist publications.

Maybe 50,000 people will read this Atlantic story. Meanwhile there are millions who are learning “how Jordan Peterson thinks” on YouTube and podcasts.

The author of the story is right about one thing: the Left need to fear Peterson. He’s the light of Reason amidst the hate and muddy thinking of the Neo Marxist Left.

I have a financial adviser that’s a lefty, so I can identify with your situation somewhat. This old hag has CNN on, on her large flat screen mounted behind and above where her clients sit. This moonbat does not understand why anyone would dislike CNN.

She’s taken OK care of our IRA. If it weren’t so expensive to switch adivsers I’d do it.

It is not cynical. It isn’t a fake tactic. They BELIEVE in it.

Identity politics takes this one step further. It is a reversion to the unification of tribe and faith. It is most akin to the Old Testament Jews. Real Jews worshiped Yaweh, Jews who worshiped another God were expelled or killed. The shared faith increases cohesion of the group and power of the leaders. Predicating membership in the tribe on belief system causes everyone who loves you to pressure you to conform to the belief system.

By saying “real blacks are Democrat, real women are liberal”, it enables liberal bullies to abuse evil apostates, those who betrayed the tribe by espousing blasphemous views. How dare Tammy Bruce, a lesbian, express conservative views? Conservative blacks are traitors, call them ethnic slurs that we say evil racist conservatives use for everyone. They’re not really black because they’re conservative and actually worse than groups we assume aren’t believers like white men.

A decade before Me, Too, liberals were sexually demeaning conservative women.

Why revert to tribalism? It creates a lot of opportunities for race baiting liberals to become leaders of THEIR communities. It divides society into competing groups that liberals think justifies having big Mommy government over everyone to mediate the disputes and make it fair.

By thinking everyone is oppressing you and against you, you undermine the common American culture that liberals hate as evil and oppressive. And it justifies keeping immigrants from assimilating, because their culture is part of their sacred identity and necessary to keeping them a tight uniform Democrat voting block. This is simply a shift in Communists’ constant war of the classes to constant warring between demographic tribes, instead.

Identity politics lets you attack the family, too, by saying men are oppressing women and can’t understand them. Or pushing interracial families to pick their tribe while simultaneously demonizing those who intermarry. White guy dates an Asian? He’s just a racist fetishizing her. A black man wants to marry a white woman? He’s bought into white supremacist standards of beauty and betraying his tribe.

There’s collective guilt like original sin but no redemptive aspect. Instead, at best, the lower castes can rise up to tolerated status for sufficiently denouncing their inborn sin like white privilege. Like Christian dhimmi in Muslim theocratic systems, there are direct personal benefits to doing this. If you beat yourself up, the people who hate you won’t do it worse. If you demonize your own group, they put up with you for entertainment.

Demonize your own group and advocate their oppression, and your moral superiors with all the power will put you in charge of your group. So by hating on whites and men, like the DNC party chair candidate who said it was her job to silence white people, they expect to get a position in middle management.

Many other liberal bullies’ tactics are right out of Puritan times. Shaming and shunning of dissidents. But there are no constraints when you can enlist thousands of strangers on the internet as there were when you have to live with the people afterward. So while you might throw tomatoes at them on Saturday or scream insults all weak, you shut up at the end of the punishment period because you sit with them in church on Sunday. The weaponization of poverty, intentionally destroying someone’s ability to earn a living, was not tolerated because the people doing it had to literally pay the welfare for the person they hurt so.