The Board of the Association for Library Service to Children (ALSC), a division of the American Library Association (ALA), voted to change the name of the Laura Ingalls Wilder Award to the Children's Literature Legacy Award because they found her “Little House” series (written in the 1930s through the 1940s) to  “reflect dated cultural attitudes toward indigenous people and people of color that contradict modern acceptance, celebration and understanding of diverse communities.”

“When the American Library Association renamed an award formerly bearing Laura Ingalls Wilder’s name, calling her works “dated” and racially offensive, the reaction was swift and passionate. Wilder is more than just another author for many people. She’s been a long-standing, much beloved American icon for generations of children.”…It’s more than just an award being renamed, this is a symbol of the rewriting of American history into a cleaner, more palatable and PC version.  - The Federalist

Just a reminder - this is what happens when you allow the Left to be the arbiter of what’s acceptable in our culture:

Twelve-year-old Claire Drapeau has been out as bisexual since she was in fifth-grade. 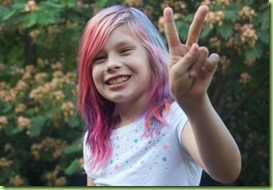 Avery began “her” transition from male to female when “she” was 4.

No, I did not make that up.

…insanity is normalized. Which is way better than “contradicting modern acceptance, celebration and understanding of diverse communities.”

What is it with the sexually inverted and artificially coloured hair?

LIbs closed mental hospitals/asylums throughout the 1960’s and 70’s in anticipation of the future. Now they pose mental illness as “normal” and acceptable. They anticipated their mental illness and eliminated places where sane society would place them. Lunatics all.