History will be kind to me for I intend to write it. – Winston Churchill

Today’s mandatory reading assignment: Vanderleun’s Clear History. Ahead of next week’s 4th of July celebration it provides a short history of the world, the role of our Declaration of Independence and Constitution in it, and the willingness of some to erase or ignore it.

This automatic ability to “Clear History” is a curious phenomenon. Something that is quite new.

Today’s “Clear History” is not the “Revisionism” common to the Marxist, Leninist, and Maoist of old, where history was remade with the destruction of texts, the alterations of photographs, the burning of books, and the issuing of the Party Line of the day to the faithful and the enslaved. “Clear History” is a complete and immediate blotting out of history en masse. It is accompanied by a careful retention of a fixed number of “historical facts” in a Curiosity Cabinet of Argument found in a dusty chamber filled with monuments to aged intellect; a go-to place where the only events of history worth keeping are those that buttress a reality that exists nowhere but must surely, in some future perfect day, come to exist everywhere… 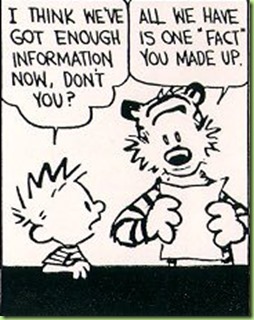 Much of the current disunity seen in our politics arises between those who ran “Clear History” in November of 2000, and those who saw History return with a vengeance in September of 2001.

One group is determined to deny History, expunge the Declaration, and shred the Constitution in pursuit of a utopia that’s buried in a global network of mass graves. Another group is composed of those who believe in the American idea and are determined let this new birth of freedom work its way across the world. Absent a defining historical event of global significance, this twain shall not meet. There is, of course, a third group of people who want to merely get on with their happy world untroubled by History, either cleared or present as a clear and present danger.

As they say: Read the whole thing – because deleting history has consequences.

The impetus started when I read a book, published in 1890 of "The World's Greatest Generals." I purchased it for my son's summer reading list. One of the generals in this book was John Churchill, who led the campaign during the Battle of Blenheim in the early 1700s.

One of his victories occurred in the German town of Traben-Trarbach, a town I lived in for four years during my tour in Germany in the late 70s. I was flabbergasted, as I never saw a memorial or landmark to this battle.

It made sense, though...Churchill was a Brit, and the French and Germans had fought over this territory for hundreds of years.

I promised myself if I ever go back to school and get an advanced degree it will be in military science.

You know, in preparation of the coming Hard Times.

I work with a diverse group. It’s fun to tell a Chinese dude that his government killed thousands at Tien Amin Square. They have no idea.

Oh, and young people suck. They don’t know squat, and I think it is by design.

3 posted on 06/26/2018 5:33:40 AM PDT by T-Bone Texan (Get off my lawn and GTFO of my country.)
[ Post Reply | Private Reply | To 2 | View Replies]
To: T-Bone Texan
Your story brings back fond memories of the 1980 election. My German neighbors were convinced that Reagan would start WWIII, they were pleading with me to vote for Carter.

About two months before the election, I decided to educate them, and give them the reasons why I thought Reagan would be a far better President than Carter.

I had a great education through college: I attended CA public schools when they were the best in the nation (I tested at 12th grade reading level in 6th grade), and Gonzaga is a great university. It wasn't until after I graduated that I appreciated the core curriculum of this Jesuit university.

At the ripe old age of 26, I schooled the mostly middle aged neighbors of mine on American history and civics, and world history, all in German...my German was very good as I had been in country nearly four years. My main point was that the world is a safer place when America is strong, and I believed that Reagan would deliver on his promise to strengthen the US economically and militarily.

My case was won on Inauguration Day when Iran released the hostages.

4 posted on 06/26/2018 5:53:58 AM PDT by Night Hides Not (Remember the Alamo! Remember Goliad! Remember Gonzales! Come and Take It!)
[ Post Reply | Private Reply | To 3 | View Replies]
To: Night Hides Not
One of the generals in this book was John Churchill, who led the campaign during the Battle of Blenheim in the early 1700s.

I first read about John Churchill, 1st Duke of Marlborough when I picked up a book called The War Game in a used bookstore. It was one of those "most decisive battles" books that covered battles from Thermopylae to WW2, and included Austerlitz, Waterloo, Gettysburg, etc. Each battle had a different historian author. The one that most fascinated me was Blenheim, and it encouraged me to read more about Marlborough and his campaigns. If you are interested in Marlborough, you absolutely should read his descendant Sir Winston Churchill's account: Marlborough - His Life and Times. Make sure you get the unabridged version!

The account of the Blenheim campaign is really exciting when Churchill tells it. The battle itself was not particularly brilliant, as it relied on some French mistakes in order to succeed. But the whole campaign and the way he which he essentially sneaked his army to the Danube while keeping his enemies guessing the whole time is remarkable. He actually fought some better battles, but the Blenheim campaign as a whole is simply an incredible achievement.