Let me be clear, not THIS Scott Peterson: he’s just a murderous sociopath. 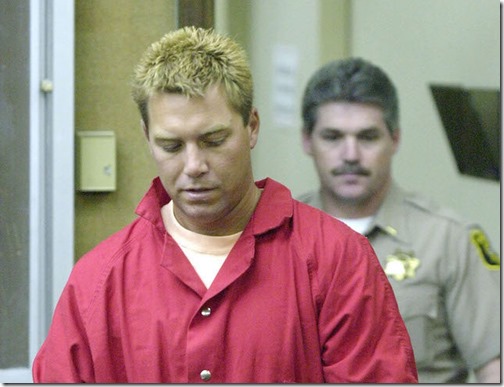 The Scot Peterson everyone’s talking about today is the recently retired Broward County Sheriff's Office Deputy whose dereliction of duty might arguably be considered  “acting stupidly.” 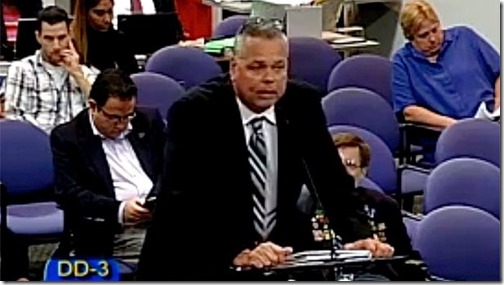 According to Officer Tim Burton of the Coral Springs Police Department, Peterson responded to the Parkland school shooting “by seeking cover behind a concrete column leading to a stairwell” rather than running into danger to stop the killing of unarmed children and school staff.  But before you jump to conclusions, let me point out that Peterson was NOT an assigned “School Security Guard,” rather he was a “School Security Monitor.” 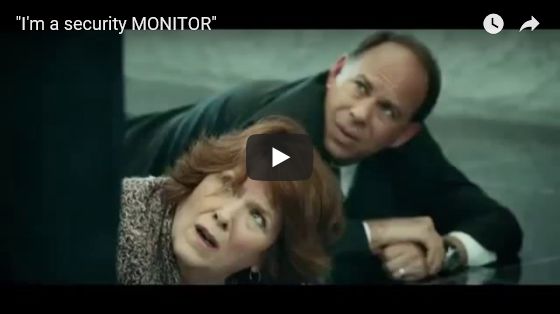 This clarification of Peterson’s assignment and duties should help Student Jenna Jorsten who told WSVN that she was “in shock” Peterson stayed outside -- especially after learning of unarmed teachers and students who risked their lives to save others. “If he’s the one with a gun, he should be the one out there with the gun trying to protect the kids,” she said. “Why was he hiding outside? It just makes no sense to me whatsoever. I mean it just doesn’t make sense to me at all.” I suspect she feels the same way about the other 3 Broward County “security monitors” with guns who showed up on the scene to monitor the situation from outside.

But Peterson wasn’t the only one — three other Broward County Sheriff’s deputies also remained outside the school with their pistols drawn as they took cover behind their vehicles, CNN reports.

Lest you be concerned about  ex-deputy Peterson’s safety and that of his family in the aftermath of this mis-misunderstanding of his duties, let me assure you there’s no reason to get all wee-weed up. Broward County Sheriff Scott Israel has pulled out all the stops to protect him and casa Peterson: 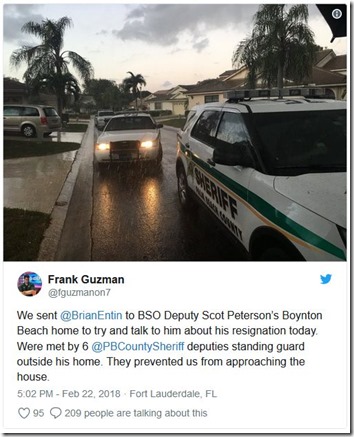 Wow, 6 fully armed Deputy Sheriff “Security Guards” (NOT Security Monitors). Imagine if the Sheriff’s Department had sent 6 fully armed Deputy Sheriffs to Parkland HS not as Security Monitors but as actual Security Guards.  And imagine if Coach Feis, teacher Scott Beigel and Athletic Director Chris Hixon had something at their disposal other than their bodies to protect the students; something like maybe a gun. I’ll bet Scot Peterson has a gun. You know - to protect his family.

Seems like it’s time to get back to the basics of real police work, this “monitoring” crap is working about as well at the local level as it works for the FBI. 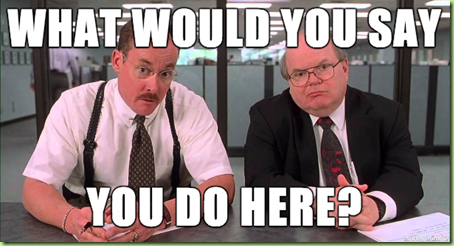 Clue: the answer should not be “monitor”

TOPICS: Humor; Politics
KEYWORDS: browardcounty; parklandshooting; schoolshooting; scotpeterson; stonemandouglas
1 posted on 02/24/2018 6:55:27 AM PST by NOBO2012
[ Post Reply | Private Reply | View Replies]
To: NOBO2012
This coward's pattern as well as the Deputies hiding behind cars outside are actually typical. Look at how things went down at Columbine: lots of heavily armed and armored SWAT standing around while active shooters are murdering unimpeded indoors.

The police aren't our courageous protectors and haven't been for decades. Their job is to make busts and to get home safely every night.

The Marine Corps, they are not.

Too bad the "Safety Monitor" didn't hand his pistol to a random student - they might have done some good.

How many years did this man receive a paycheck with the assumption that he would draw his weapon and protect the students of this school? Apparently he was taking pay under false pretense as he had no intention of doing his job. I think he owes the sheriffs dept a lot of money.

Would imagine the school's policy of not doing drug busts/arrests on campus dictated he wait for the perp to leave the campus before he took action anyway...

What a freaking mess.

This makes me sick to my stomach.

The same people condoning this POS behavior will cheer on Cops who will bust down your door in the middle of the night throwing in grenades killing or maiming you and your family in and effort to confiscate your guns.

The police did the same thing in the Cheshire CT murders. They waited outside the house and listened to the mother and her two daughters being raped, strangled and burned alive. That police department is well known for writing traffic tickets for even the slightest infraction. I guess they thought that was all their job required them to do.

He does owe the parents and families of the 17 murdered students and faculty his all, though.

May God have mercy on his soul.

Perhaps those officers were just following orders from the Sheriff. Anyone ask the officers themselves or is it not important what they have to say? Apparently not, but it’s OK for some snotty noes kid to accuse them of being cowards.

1. A man follows his conscience and does what he has to do. Even if he was “ordered to stay out” he had a duty to try to save those kids.

2. I’m not a “snot nosed kid”: I have faced fire - heavy fire - and done what I had to do and was severely wounded. Men do that, cowards don’t.

Could Peterson be considered an “accessory before the fact” in at least some of the deaths?

Thanks for posting MOTUS.

“Kind of reminiscent of the ‘I’m not a XXXXX, I’m a xxxxxx monitor.’”

I’m sure someone will create a graphic of that. It’s perfect.

“Broward County Sheriff Scott Israel has pulled out all the stops to protect him and casa Peterson.”

Who’s protecting Scott Israel? Does he NOT GET that HE is equally responsible — maybe more so — than Peterson? The arrogance of that man makes me crazy.

One article says resigned, another says retired. Which is it?

That the rot has reared it's ugly head in our local community is even sadder. Police, most are due the respect received. They work hard and go the extra mile when needed. Others, they should have stayed at the donut shop poking them in with coffee. This fact can begin with their superiors (all of 'em) and the ability they possess to do their job. The lesson has been learned here and now. Give a no-good the highest office in the land, stand back and do nothing, watch as civilization crumbles around society.

PRAY FOR OUR NATION