It’s Day Two of the government shutdown. Democrats spent yesterday celebrating and marching, even here in Park City at the Sundance Film Festival. Their message was an important one, according to the Daily Beast:

This year’s rally seemed united by two themes: the importance of this moment for women, and, well, “F*ck Donald Trump.”

While last year’s march at the Fest was said to top out at 4000 (yuge, in Park City) this year’s was exaggerated to reflect “hundreds.”  Of course last year’s numbers included Harvey Weinstein who was marching in solidarity with them, and we all know how many independent, strong women were attracted to Harv, wherever he went, and no matter what he did. 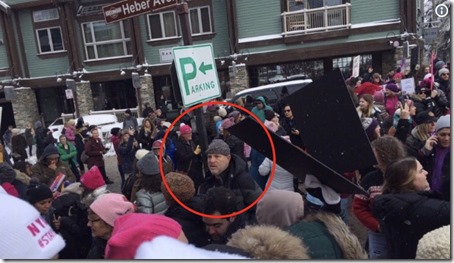 This year’s march has headlined by Hanoi Jane and Gloria Allred, which could explain the lower turnout.

As snow fell at the rate of an inch an hour, the temperature fell to 22 degrees, and traffic crawled to a stop, the crowd gathered in a Park City athletic field to mark the first anniversary of President Trump’s inauguration and the women’s rallies that sprang up around the country and the world. They waved signs that read “Dream Act Now,” “Free Melania,” “Make Russia Great Again,” and “Our Rights Are Not Up For Grabs.” In one of the more imaginative protests, Nina Kaufman, a Salt Lake City-based performance artist, stripped to a sports bra and rolled down a long banner adorned with a poem about the environment. As she wiped snow off and sipped coffee, Kaufman told Variety that she had been retired for 15 years, but had been spurred into action by the #MeToo movement. – Variety

“This marks the end of fear being used as a weapon to silence women…this is the year that women’s voices have been heard…and the year we said to rich, powerful, famous men, ‘You can break out hearts, but you cannot break our silence!’”

William Wallace would be so proud.

Although he couldn’t attend himself, VSG-PDJT sent a message: 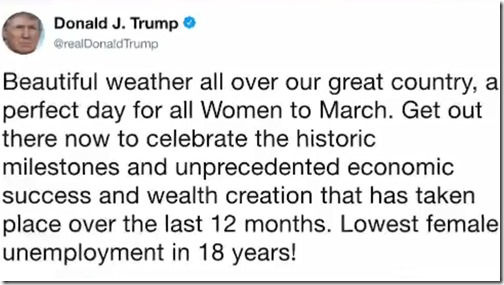 Voter Registration and Voter Turnout were the two themes of the day. How did the Dems win in Virginia? In Alabama? Not by issues, not by money, but by GOTV. They got people to the polls in both early voting and on the final day of voting.

In contrast the Republicans did not get their voters to the polls. Not in early voting. Not on the final day of voting.

Will the Republicans learn the lesson of 2016? The Democrats already have.

What’s funny is that it is a nice post, and they stI’ll hate it.

Yep - like I stated earlier, he pissed all over the parades of the women against him .......maybe he did indulge in water sports in that hotel....;-}

The only disagreement I have is that Alabama was a special election.
The rats could, and did, put the entire weight of the party into defeating one lone republican.

They won’t have that luxury In the mid-terms.
They have seats they have to defend so their money and resources will be spread out. Any money they spend trying to defeat a republican will be money not available to defend a seat in a state that voted Trump in ‘16.

With that said, I never underestimate the ability of the GOP to screw up.

How many votes were swayed by Hannity? Others. Where are the accusers now?

“How many votes were swayed by Hannity? Others.”

That I have no idea.

“Where are the accusers now?”

Off spending their Soros/DNC money.