Today is the anniversary of the Battle of Hastings in 1066, in which William the Conqueror initiated the Norman conquest of England by defeating the forces of the Anglo-Saxon King Harold, who was killed in the conflict (although there's been recent speculation that Harold survived).

William, Duke of Normandy, had been promised the English throne by his cousin, Edward the Confessor (reigned 1042-1066), and Harold, earl of Wessex, had sworn agreement to that succession. However, with the death of Edward, Harold crowned himself king, leading William to mount a sea-borne invasion to assert his own right.

Landing his army on the south coast of England, he confronted Harold at Hastings, routed the Anglo-Saxon army, declared himself King William I, and ultimately established Norman hegemony over all of England.

TOPICS: History
KEYWORDS: battleofhastings; battles; godsgravesglyphs; hastings; history; kingharold; middleages; renaissance; williamthebastard; williamtheconqueror; williamtheusurper Navigation: use the links below to view more comments.
first 1-20, 21-27 next last
Of interest - For the Last 1,000 Years, the Same Families Have Owned Most of England:

Shortly after the Normans conquered England in 1066, their monarch, William, seized all of the lands, then divvied up control among those soldiers and nobles who helped him defeat the Anglo-Saxons (and keeping a fair bit for himself). However, as dramatic as that was, it is even more shocking that today, most of Britain remains in the hands of the descendants of those early Norman conquerors.

My family was in the middle of the battle for the Normans, and were given a piece in the northwest.

See about their latest battle with Penzance for the world’s record for most pirates? Hastings still has it as Penzance’s latest bid failed as they came up short of the number of pirates needed to win due to a group of them not leaving a pub. It’s an ongoing battle.

I remember reading an article, I believe in National Geographic, in 1966 on this. I was 5 years old. It’s part of why I went on to get a BA in History.

But now England falls to another invasion.

Yesterday was the fast day of St. Edward the Confessor.

Yes, unfortunately. And with most of Europe along with it. Total Insanity! Done by an insane Leftie wet dream. Multiculturism?

My paternal family line were part of that invasion from Normandy. My name is from Normandy and the family stayed in what became England until around 1730 when they ventured to Ameica. Their offspring then joined in the war to secede from the British empire.

I still have that issue of National Geographic. FYI, you and I are the same age.

I didn’t think that anyone else even knew about that article. What a small world we live in. 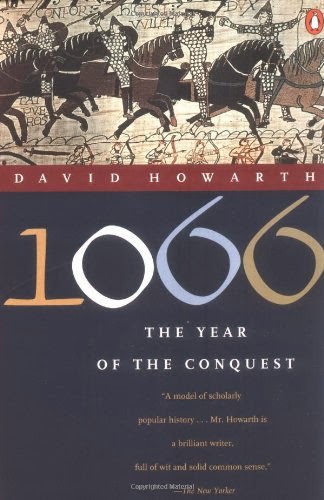 The Normans were a people that began as Norse invaders of the British Isles, then lost their foot-hold their to the Anglo-Saxons, and left for the northern shores of Gaul, which in time became Normandy (land of the Norse men - thus “Normans”), where they built up their duchy there, under permission of the Frankish kings. About 150 years later, under William and by then a mixture of Norse and Frankish culture and sentiment, they return to retake England as part of a royal succession contest.

What has always been interesting to me, is that lost (rarely discussed) in all the history of how the Normans were in England, lost out to the Anglo-Saxons, resettled in Normandy, and returned from Normandy to conquer England, is how they lost Normandy itself, as eventually Norman power in Normandy was lost to the Frankish Kings.

Nine hundred and fifty-one years ago.

It's an honored tradition. The Saxons had done the very same thing to the Britons, and the Romans did it to the Celts, and I imagine the Celts did the same to whomever was there before them.

‘too’ vocal not ‘to’. Stupid autocorrect.

Well, as you can see from my screen name, I regard the year 1066 as probably only second in significance to the year Christ was born!

Keeping in mind that it is the victors that write the histories, at least before modern times, I cannot help but feel for Harold of Wessex, son of Godwin, and last Anglo-Saxon King of England. What few remember is that 1066 was a 3-corner battle for England, with Harold having already defeated a Scandinavian invasion under the command of Harald Sigurdsson Hardrada and Harold’s half-brother Tostig in Yorkshire, 180+ miles away from London.

Harold’s army was long assembled (7 months) waiting for William of Normandy’s attack. Harold had to release his troops as supplies ran low, then reassemble the core troops, march to the Hardrada invasion (4 days) and after the victory turn right around and march to Hastings, 250 miles.

One does wonder what the outcome might have been with a different sequence of events? If Harold or Hardrada had ended victorious, England would have stayed more Scandinavian and more inclined towards the Irish Church traditions at least for a longer time.

Amazing. It’s been good for England.