As we continue to reflect on the Canadian cool factor, Drudge reports:

A sniper with Canada's elite special forces in Iraq has shattered the world record for the longest confirmed kill shot in military history at a staggering distance of 3,450 metres.

Sources say a member of Joint Task Force 2 killed an Islamic State insurgent with a McMillan TAC-50 sniper rifle…It took under 10 seconds to hit the target.

"The shot in question actually disrupted a Daesh [Islamic State] attack on Iraqi security forces," said a military source, who stressed the operation fell within the strictures of the government's advise and assist mission. "Instead of dropping a bomb that could potentially kill civilians in the area, it is a very precise application of force and because it was so far way, the bad guys didn't have a clue what was happening." 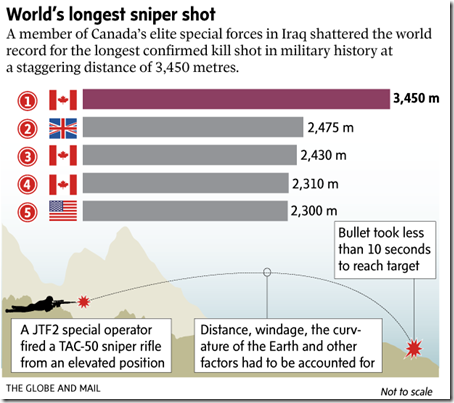 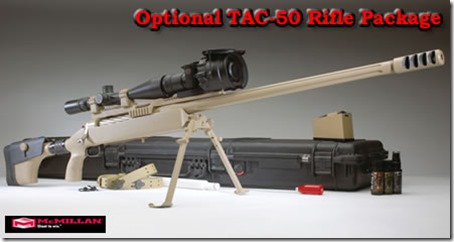 McMillan TAC-50 sniper rifle (Made In The USA) 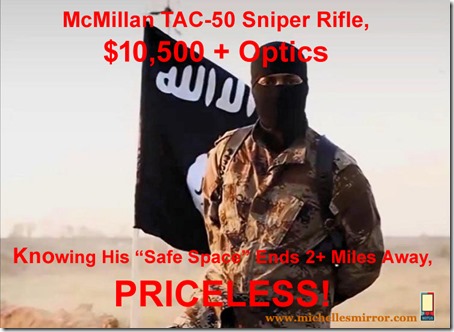 Why do you need one? (h/t to whoever posted the other day, memory fails me but take a bow) 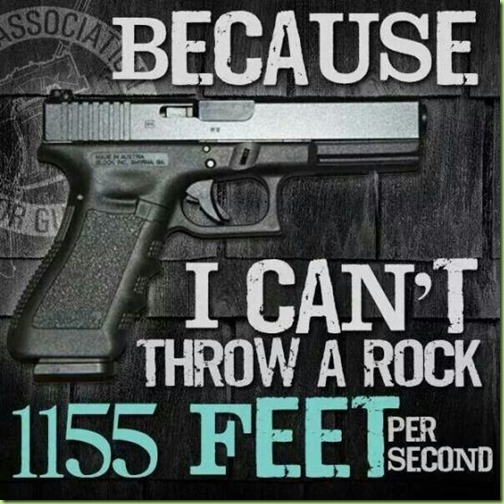 Was good until that NAGR pic.

You know about NAGR and Dudley, right?

Note that out of the 5 longest sniper shots cited, three were by Canadians. I wouldn’t be surprised if it isn’t because of the popularity of hunting in Canada. In my experience, lifelong hunters are the best marksmen.

Also surprised that there are rifle scopes with which you can see 2 miles away.....

AND, with the incredible drop shown of the bullet trajectory, how would the target have even been in the visual field of the scope?

Need to call my close former Marine sniper friend in Texas who served in Desert Storm and other battlefields.......

Scope base.
They make scope bases with preset MILs or MOAs built in, so the scope can be used at longer ranges without running out of turret adjustment.

That's what solves the problem of scope view versus muzzle inclination for long ranges.

Prime Minister Snowflake is saddened. I expect this soldier to be court martialed for manslaughter and Canadian troops recalled from Iraq.

March makes a scope that could do it, 80X, there are air gunners that use them for Field Target. The optical quality is stunning, the ~$3,700+ price is a deterrent though...

Would love to view through that scope just once.......

....lifelong hunters are the best marksmen...

That was true with WWII farm boys who became soldiers, sailors, Marines, fighter pilots, and especially gunners on bombers. They understood how to lead a target if necessary when firing, trajectory, and angle of firing among other hunting skills.

For extreme long range you would zero the scope at 100 yards and "slip the rings" on the turret so you were at the bottom of the adjustable range.

Then your adjustment for maximum range is dependent on the number of MILs or MOAs the turret allows to adjust.

Beyond that you'd use holdover based on the reticle markings.

Prime Minister Trudeau likely is not so happy about this.

The Grand Mufti of Ottawa will lead a protest into Trudeau’s office over this blatant act of Islamophobia.

The pussy will probably want more gun control in Canada.

But the rifle was made in Phoenix, AZ — USA