I was reading this post on American Digest, "All boredom amused:" Rhyming History, Trump, and the Media as Foreseen in Network, 1976,” and wondered how the “Money Speech” might have been written A.D. (After Donald). 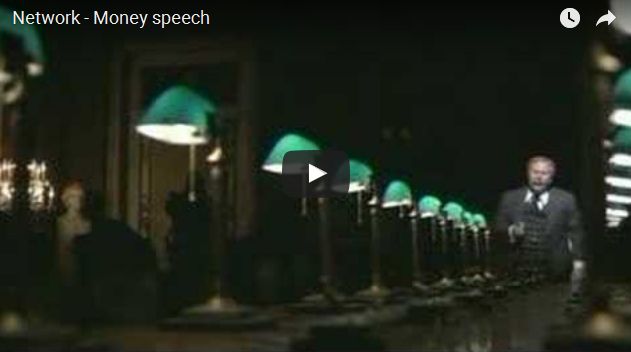 "You have meddled with the primary forces of nature, Mr. MAGA, and I won't have it! Is that clear?

"You think you merely stopped HILLARY CLINTON’S PRESIDENCY AND PROTECTED YOUR PRECIOUS 2ND AMENDMENT. That is not the case. YOU have taken POWER AND CONTROL AWAY FROM YOUR BETTERS, DEMOCRAT PROGRESSIVES, and now YOU must put it back! It is ebb and flow, tide and gravity. It is ecological balance.

"You are an old man who thinks in terms of FREEDOM, LIBERTY AND OPPORTUNITY. There are no FREEDOMS. There are no LIBERTIES. There are no OPPORTUNITIES. There is only one holistic system of systems. One vast and immane, interwoven, interacting, multi-varied, multi-national, MULTI-CULTURAL dominion of JUSTICE. SOCIAL-JUSTICE, ENVIRONMENTAL-JUSTICE, ECONOMIC-JUSTICE AND DIETARY-JUSTICE. "It is the international system of GOVERNANCE which determines the totality of life on this planet. That is the natural order of things today. That is the atomic, and sub-atomic and galactic structure of things today.

"And YOU have meddled with the primal forces of nature. And you will atone.

"Am I getting through to you, Mr. MAGA?

"What do you think the Russians talk about in their Councils of State? Karl Marx? THEY MEET WITH THEIR MINISTERS OF SOCIAL MEDIA AND POLLING AND PULL OUT THEIR TWITTER TRENDING CHARTS, FACEBOOK “LIKES” DATA AND DAILY TRACKING POLLS, just like we do.

"And our children will live, Mr. MAGA, to see that ... perfect ... world in which there is NO RIGHT, NO WRONG, NO GENDER AND NO CHRISTIANS OR JEWS. One vast GLOBAL GOVERNMENT for whom all men will work and serve. In which all SHALL KNEEL WITH THEIR iPAD, POST TO FACEBOOK AND TWEET 5 TIMES EACH DAY.

"All necessities provided. All anxieties tranquilized. All boredom amused.

Today’s Post was brought to you by Little Mo,

who is like a fly on the wall - invisible until he starts buzzing around.

The original one was not bad either.

Some of the substitutions caught me off guard, and made me laugh out loud.

In the updated version, the network guy would be shot to death in a “robbery attempt” while returning to his car.

(I didn’t see the movie, so don’t know how it actually ended. Will have to look for it.)

Thanks. I’ll pull that up on the widescreen with the Prime/YouTube app.