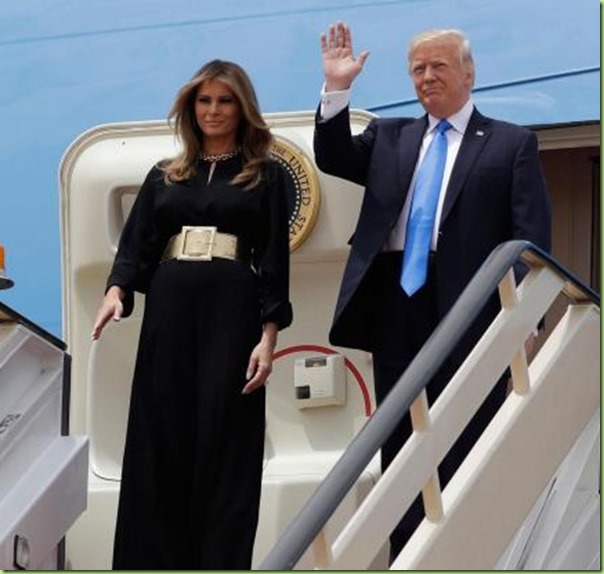 Somehow the boob belt seems less offensive on Melania. But do you want to know what is as offensive? The lack of head covering. ABC couldn’t wait to point out that although Michelle Obama didn’t wear head covering when visiting Saudia Arabia in 2015,

First lady Melania Trump stepped off Air Force One at King Khalid International Airport Saturday morning without a head scarf -- following the example of her predecessor, Michelle Obama -- and potentially creating a stir in this conservative Islamic country. – ABC

she “intended to make a statement in a country where women have few rights.”  Not only does Donald Trump have no intent of making women’s rights an issue on his trip, he had the audacity to criticize Lady M for not wearing a head covering 2 years ago:

Let’s just say his views have evolved on this subject – a position that was always good enough for our historic, last half-black president. 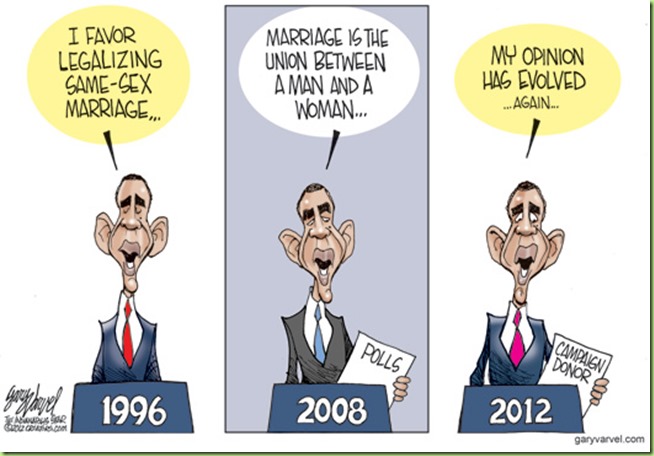 Anyway, I think the FLOTUS looked lovely and quite at ease,

which is more than could be said about our former FLOTUS abroad: 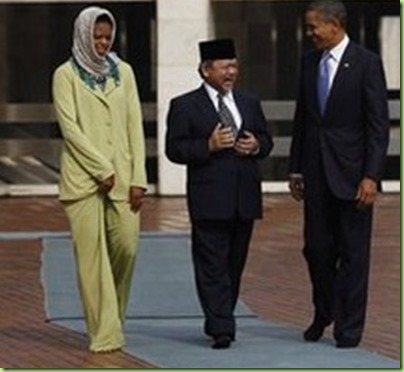 Itchy and scratchy in Indonesia 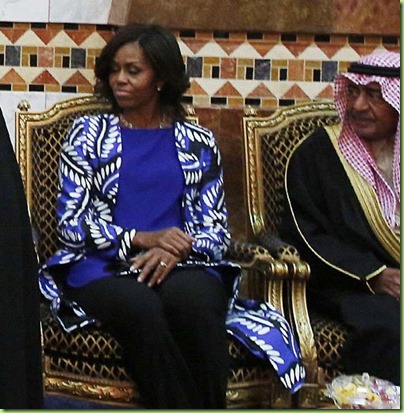 Melania usually wears beautiful clothes but those are strange - like a Greek priest’s robes!

Appropriate for the venue. Sigh.

I live in Indonesia, have since 1995, and I have never worn a head scarf.

About Obama and his belief in gay marriage:

He always supported gay marriage, of course and lied through his teeth about it. David Axelrod admitted this in his book Believer: My Forty Years in Politics. When Axelrod first met Obama (in 1996?) Obama gave a public speech supporting gay marriage. Axelrod told him that he would never make it to higher office if he kept saying that so they agreed he would lie about it from then on. Axelrod makes this clear in his book (pages 446-447 if memory serves) and in interviews he gave on television when the book came out.

That means it was all a lie: Not supporting gay marriage in 2007-8 was a lie. Joe Biden “making a gaffe” and blurting out that Obama had an evolution of thought on the subject was all a planned stunt. (Some of us were smart enough to know this at the time, but many people were too dumb to see it).

FWIW, I’m wondering if the glam boob belt was done with express purpose of making her ensemble look less like an abaya...

Or even the need to do her hair and make up.

Oh Good Heavens. Mooch in that sick pea green get up with the hijab is just horrible. She should have worn a burka to cover he grouchy face.

Another thing. Why is she grabbing her crotch?

EVERYTHING is adorned with gold.

THAT gold belt around Melania is as much a power statement as one of The Donalds business ties.

Don’t ask, you’d only get sick if you knew.

That was my thought too as soon as I saw it.......What makes it even more pronounced is the black outfit she is wearing.....Definitely making a statement.

Maybe she thought it took the curse off the outfit but from a woman’s perspective, I hate it. I wonder what the idiots in the media are going to make of it.

She sure knows how to wear clothes.Gasp!

The Saudis sucked-up to Clinton figuring she'd be in the Oval Office when they needed something. The Saudis admitted to donating 30% of Clinton's campaign funds....that means they blew about 320 million bucks to try to get Hillary elected.

The Saudis even helped stage Hillary's putative election night "victory"---giving her a huge expensive flat screen TV supposedly to air her crashing through a symbolic 500,000 dollar glass ceiling. (This from a kingdom where women are not allowed to drive).

Did Hillary report the Saudi gift to the FEC?

In 2008, it was revealed that the Gulf kingdom had donated between $10m and $25m to the "do-good" Clinton Foundation.

Last year the Centre for Studies and Media Affairs at the Saudi Royal Court paid public relations firm the Podesta Group $200,000 for a month-long project to provide “public relations services”. The Podesta Group was founded in 1988 by brothers John and Tony Podesta. John Podesta is the chair of Hillary Clinton’s 2016 campaign.

POINTS TO PONDER Obama's cut of the Saudi monies must have been substantial. B/c Pres Obama and Secy Hillary Clinton approved record billions in arms sales to Saudi Arabia.

(NOTE: It is illegal in the United States for foreign countries to try to influence the outcome of elections by funding candidates. That appears not to have stopped Hillary or the Saudis, however.)

THE PRINCE SPEAKS: “Saudi Arabia provided with full enthusiasm 20 percent of the cost of Hillary Clinton’s election"......the report quoted Saudi Prince Mohammed as having said. According to the US Federal Election commission, over the past two years Clinton has raised a little more than $211.8 million. 20% of this sum is $42.4 million.

The Saudi Press Agency then reported that the senior royal was due to fly to Washington where he will meet Obama admin officials to discuss US-Saudi ties.

Poser:
Someone whos acts like someone theyre not,but not realizing that there being fake, basically a loser trying to fit in.

Baller:
1. One who exhibits a consistent proficency at-, or exuberant love for the game of basketball.
2. One whose person has been fully and successfully established in numerous social circles (esp. one who is extremely popular with both the male and female members of any given social group)
3. One whose status in society has been earned by one’s possession of “game” (that is, proficiency at the game of life)

(Adj)
1. Exhibiting those qualitites of a baller; not limited to the description of a person, ‘baller’ may be used to describe any place, thing or situation.

Iirc, the Obamas were visiting a mosque or Islamic school on that occasion.

Melania looks gorgeous. The belt is a bit large, but other than that, it’s fine, since her jewelry isn’t overdone. She kept it simple, which I like.