Did you see this? Scientists say an ancient settlement discovered in Western Canada predates the pyramids. 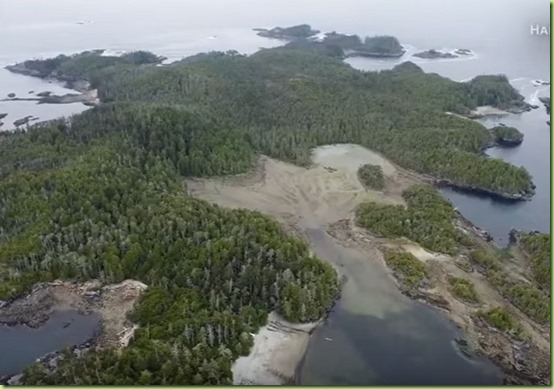 An ancient village believed to be one of the oldest human settlements ever found in North America has been discovered during an excavation on a remote island in British Columbia.

The village, which is estimated to be 14,000 years old, has been found on a rocky spit on Triquet Island, about 500 kilometres northwest of Victoria, Canada.

It is estimated the village is older than Egypt’s pyramids.

And according the CBC the find supports the oral history of the Heiltsuk Nation:

“Heiltsuk oral history talks of a strip of land in that area where the excavation took place. It was a place that never froze during the ice age and it was a place where our ancestors flocked to for survival,” said William Housty, a member of Heiltsuk Nation.

B.C. archaeologists have excavated a settlement in the area — in traditional Heiltsuk Nation territory — and dated it to 14,000 years ago, during the last ice age where glaciers covered much of North America. 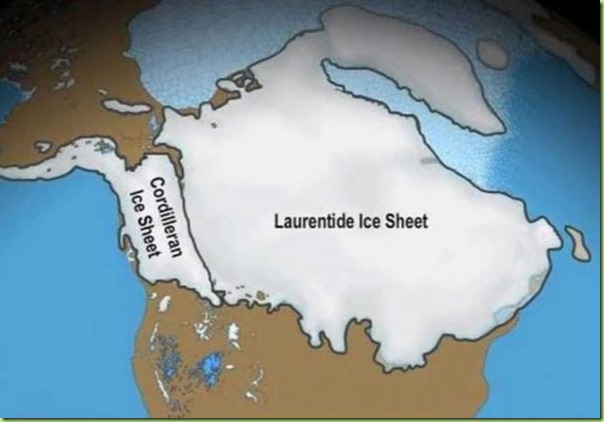 The conjoined ice sheets from the Rockies (the Cordillera ice sheet) and eastern Canada (the Laurentide ice sheet) blocked Alaska. ( University of Maryland )

Apparently the ice sheets formed during a previous Ice Age are a fundamental aspect of explaining how Amrericas “First Peoples” came to be First Peoples:

One theory of how humans entered the Americas is they came from Asia over an Alaskan land bridge through an ice-free corridor east of the Rockies and made their way through what is now eastern and central Canada.

But if that’s true it means  {{HORRORS!}} there must have been global warming before Al Gore arrived on scene to warn us about his Inconvenient Truth!?! I’m dazed and confused but somehow I suspect the Russians are behind the whole thing. 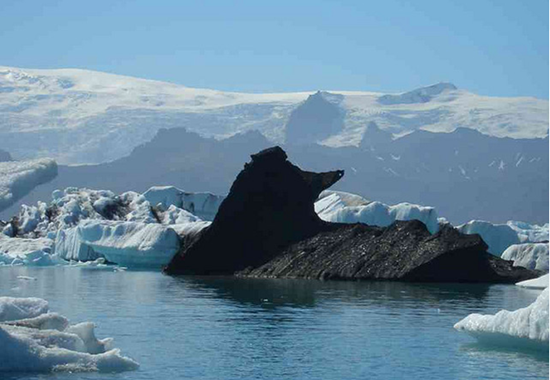 But inconvenient for the global warming hoaxters. That’s good too.

So, basically, we have numerous “Sovereign Nations” of Chinese within our borders.

Time to get rid of The Bureau of Indian Affairs.

4 posted on 04/11/2017 7:31:57 AM PDT by UNGN (I've been here since '98 but had nothing to say until now)
[ Post Reply | Private Reply | To 1 | View Replies]
To: NOBO2012
The most inconvenient truth is that the ACTUAL first peoples in North America were the Solutreans [ stone aged people from Europe ] who were killed off & absorbed into the Beringian invaders. The Solutreans were the first peoples of Europe - pre dating the later arrival of the Indo Europeans - AND are also the first peoples of the North American continent.

This text I just posted should be added to the Solutrean / the true First Nations of North America ping. The Solutreans are named after the town of Solutré located in modern France. The Solutreans were concentrated in the Iberian peninsula of where modern France & Spain are today & their only full remaining descendents are found within the Basques communities of the region.

The village, which is estimated to be 14,000 years old, has been found on a rocky spit on Triquet Island

I guess the glaciers ground down the city or global warming swamped the low lands where the city was.

6 posted on 04/11/2017 8:53:48 AM PDT by minnesota_bound
[ Post Reply | Private Reply | To 1 | View Replies]
To: NOBO2012
“Heiltsuk oral history talks of a strip of land in that area where the excavation took place. It was a place that never froze during the ice age and it was a place where our ancestors flocked to for survival,”

I bet the HOA dues were a bitch.

Heiltsuk oral history for 14,000 years. They are just making this stuff up. Remember in school where the first person is told something and they in turn tell the 2nd and by the 30th person it is completely different from what the first person was told.

With all that oral and written history, Moses became an editor (directed by God) in choosing what got into the Genesis and what didn’t make the cut.

Good point....So the strip was a strip shopping center and one guy went to get chinese takeout...

I can see how the story might change from that...

I’m waiting for them to admit not everyone came from Mother Africa.

Actually, Aaron, his brother wrote Genesis based on the verbal story given to him by Moses. The story was based on The Epic of Gilgamesh, which was taught to him when he was young.

When Moses was in high places in Egypt he learned one version. When he went into the Arabian peninsula he heard a slightly different version from his father-in-law. The Jews had a 3rd version. As he was educated in the best of Egypt, he probably heard the versions from other lands.

All these versions were similar but had slight variances. Noah and the Ark is the best example where the histories in various ancient cultures were extremely similar, but never exactly the same.

So what was needed was an editor to pull together the various versions and determine which one was accurate.