I feel bad about missing the first day of Kwanzaa, which was yesterday; especially since it was the 50th anniversary of the made-up African-American holiday slated to take the place of Christmas by it’s 75th anniversary. 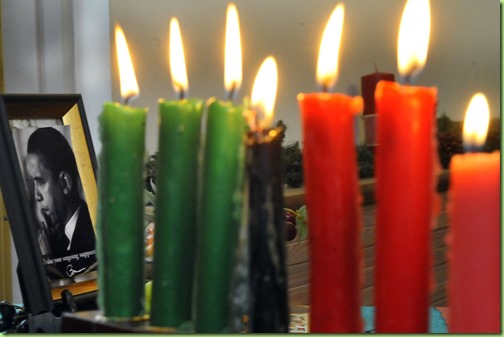 The Obamas issued their standard Kwanzaa greeting from Hawaii, saying the 7 day holiday is a time to “reflect on the rich African-American culture.” 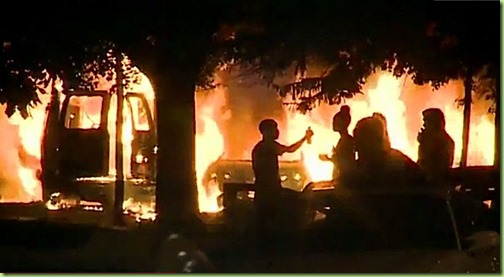 He said those principles reflect Americans' most cherished values. - AP

Moonbattery, has pointed out in the past that those values make you more Symbionese-American than African-American:

Actually, these are the values that would make you not American, but Symbionese. They Kwanzaa was invented by 1960s black power radical Ron Everett, aka Maulana Karenga. Even in the swamps of hippie era radical politics, Karenga stood out as a particularly unsavory character. His United Slaves outfit murdered rival Black Panthers, and Karenga himself was convicted of torturing women, using vices and hot soldering irons among other implements. Kwanzaa was created explicitly to divide Americans by alienating blacks from the Christian holidays that unite us.

I would like to point out that while African-Americans are welcome to share and enjoy every other holiday celebrated in America, including our inferior Western New Year if they wish, non-African Americans celebrating Kwanzaa would be considered an egregious act of cultural appropriation. Odd, given that Kwanzaa itself is a cultural appropriation of 3 non-African holidays: Thanksgiving, Christmas and Hanukkah.

Even food you enjoy when we go out during the holidays is subject to the scrutiny of Social Justice Warriors looking for new ways to be offended:

Each of these named foods are themselves the result, not the victims, of cultural appropriation.

Sushi has an ancient history in Japan but what many people in Japan and the West now see as good sushi - with its rich slices of tuna and salmon - is the result of Japanese chefs adapting their traditional dish to the tastes of American GIs during post-war occupation.

The Banh Mi is a fusion dish of French baguette - brought to Vietnam through French colonlalism in the nineteenth century - and Vietnamese flavours.

And General Tso's chicken? It dates back, at the earliest, to the 1950s, has nothing to do with the nineteenth century general Tso Tsung-t'ang, and only became famous when it was first served in a New York Chinese restaurant.

Even your cookies are not exempt;  while you can still make (non-white) gingerbread men: 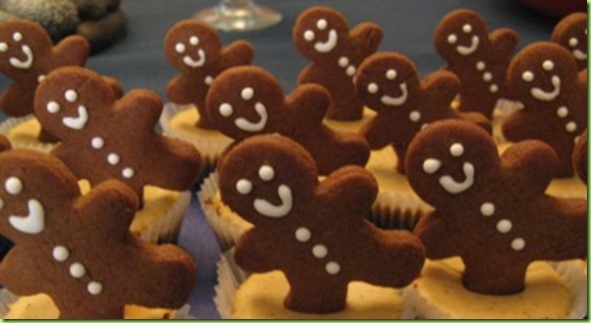 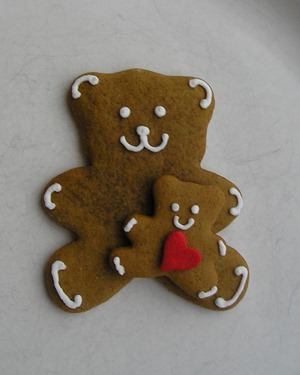 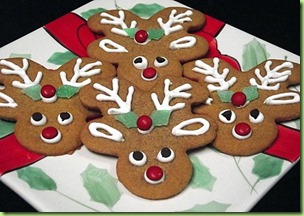 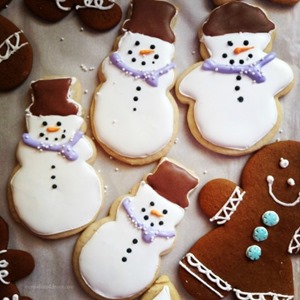 although cute, are all examples of cultural appropriation by a privileged class and therefore unacceptable symbols of oppression. 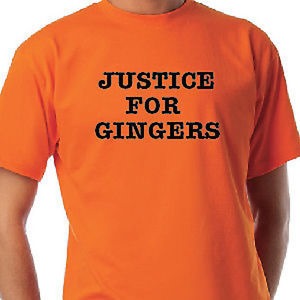 So it’s a minefield out there right now, please be careful or you may be responsible for driving the victims to violence. 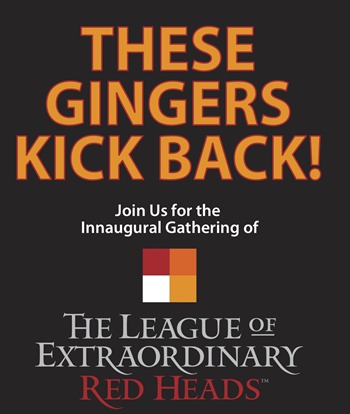 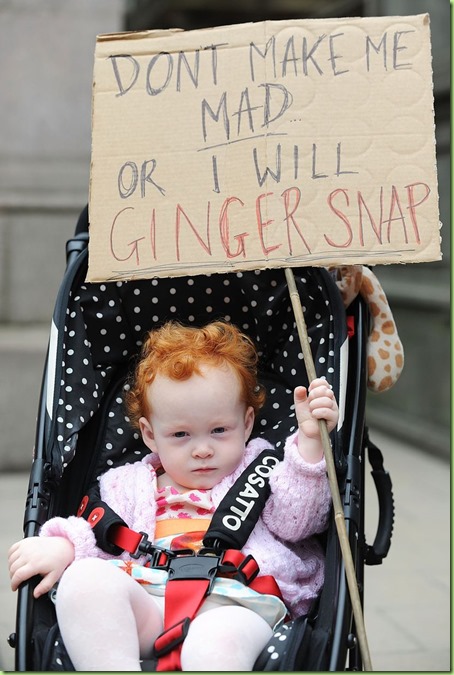 I have my toe vise and soldering iron ready.

For Christmas so far

T’was the night before Kwannza and all through the hood. Malana Karenga was up to no good......

Collective work and cooperative economics are not American values of any kind. Let alone “cherished.”

For a minute, I was down wid da unity, self determination, collective work and responsibility thang. But Ima guess, now you done tole me, that the Kwanzaa version is a lil bit diff.
Whoa, dawg.

CIA Kwanzaa is a holiday for Govt agents.

Someone should make a Meme of the Kwanzaa candelabra using a wide vice and 7 soldering irons in the appropriate colors.

( don’t have photoshop, or i would do it myself! LOL!

More of the story:

Maulana Ndabezitha Karenga (born Ronald McKinley Everett;[2][3][4] July 14, 1941) is an African-American professor of Africana studies, activist and author, best known as the creator of the pan-African and African-American holiday of Kwanzaa.

Ron Everett was born in Parsonsburg, Maryland, the fourteenth child and seventh son in the family. His father was a tenant farmer and Baptist minister who employed the family to work fields under an effective sharecropping arrangement.

The Watts riots broke out as Karenga was a year into his doctoral studies. Karenga and the Circle of Seven established a ultra-radical, paramilitary, black nationalist cult organization in the aftermath called US (meaning “Us black people or United Slave”).[8]..

...For Karenga, a major figure in the Black Power movement of the 1960s and 1970s, the creation of such holidays also underscored an essential premise that “you must have a cultural revolution before the violent revolution. The cultural revolution gives identity, purpose and direction.”[5]

US engaged in violent competition with the Black Panther Party in their claim to be a revolutionary vanguard. This heightened level of conflict eventually led to a shoot-out at UCLA in 1969 in which two Panthers were killed. Following the UCLA shootout, Panthers and US members carried out a series of retaliatory shootings that resulted in at least two more deaths among the Panthers.

In 1971, Karenga was sentenced to one to ten years in prison on counts of felonious assault and false imprisonment.[15] One of the victims gave testimony of how Karenga and other men tortured her and another woman. The woman described having been stripped and beaten with an electrical cord. Karenga’s estranged wife, Brenda Lorraine Karenga, testified that she sat on the other woman’s stomach while another man forced water into her mouth through a hose. - wikipedia.org/

Another way of distinguishing might be to think of Karenga’s gang as the Crips and the Panthers as the bloods. Despite all their rhetoric about white people, they reserved their most vicious violence for each other. In 1969, the two groups squared off over the question of who would control the new Afro-American Studies Center at UCLA. According to a Los Angeles Times article, Karenga and his adherents backed one candidate, the Panthers another. Both groups took to carrying guns on campus, a situation that, remarkably, did not seem to bother the university administration. The Black Student Union, however, set up a coalition to try and bring peace between the Panthers and the group headed by the man whom the Times labeled “Ron Ndabezitha Everett-Karenga.”

On Jan. 17, 1969, about 150 students gathered in a lunchroom to discuss the situation. Two Panthers—admitted to UCLA like many of the black students as part of a federal program that put high-school dropouts into the school—apparently spent a good part of the meeting in verbal attacks against Karenga. This did not sit well with Karenga’s followers, many of whom had adopted the look of their leader, pseudo-African clothing and a shaved head.

In modern gang parlance, you might say Karenga was “dissed” by John Jerome Huggins, 23, and Alprentice “Bunchy” Carter, 26. After the meeting, the two Panthers were met in the hallway by two brothers who were members of US, George P. and Larry Joseph Stiner. The Stiners pulled pistols and shot the two Panthers dead. One of the Stiners took a bullet in the shoulder, apparently from a Panther’s gun.

“The students here have handled themselves in an absolutely impeccable manner,” UCLA chancellor Charles E. Young told the L.A. Times. “They have been concerned. They haven’t argued who the director should be; they have been saying what kind of person he should be.” Young made those remarks after the shooting....

Despite all his rhetoric about white racism, I could find no record that he or his followers ever raised a hand in anger against a white person. In fact, Karenga had an excellent relationship with Los Angeles Mayor Sam Yorty in the ‘60s and also met with then-Governor Ronald Reagan and other white politicians. But he and his gang were hell on blacks. And Karenga certainly seems to have had a low opinion of his fellow African-Americans. “People think it’s African, but it’s not,” he said about his holiday in an interview quoted in the Washington Post. “I came up with Kwanzaa because black people in this country wouldn’t celebrate it if they knew it was American. Also, I put it around Christmas because I knew that’s when a lot of bloods would be partying.” “Bloods” is a ‘60s California slang term for black people. - http://archive.frontpagemag.com/readArticle.aspx?ARTID=20535