“(Trump) is a faker,” she told CNN in an interview from her chambers.

“He has no consistency about him. He says whatever comes into his head at the moment.

He really has an ego. … How has he gotten away with not turning over his tax returns? The press seems to be very gentle with him on that.” – NY Post 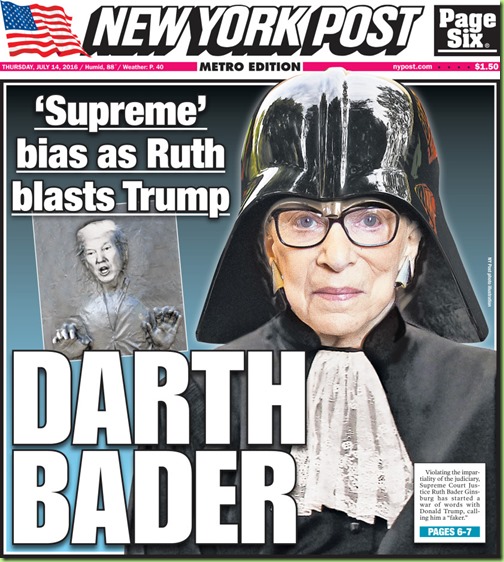 "I am altering the deal. Pray I don't alter it any further." – Darth Vader

The Donald’s response: (trigger – literally – warning) “Her mind is shot.”

If Supreme Court justices were supposed to be impartial, there wouldn’t be so much drama surrounding their appointments.

Why is it that some people think turning over tax returns is a requirement for office.Taxes are private and personal yet many people think they are entitled to see them. They are not a matter of public record.

“How has he gotten away with not turning over his tax returns?”

You’d think a SCOTUS judge would know there is no law requiring such an act, and thus nothing to “get away with”.

Also they contain almost no probative information other than the detailed listing of a person’s charitable contributions. But, a person could be partners with Kim Jon Un and Putin, and be manufacturing meth in Mexico and the tax returns would be no help.

I think this is all about her waiting to retire on Hllary’s watch.

She knows that won’t happen now.

Is there a requirement for a candidate to provide copies of their tax returns? I think they are only supposed to provide a financial statement. Besides the Wash Post has Trumps tax returns. Didn’t a liberal judge make a sealed document dump containing his tax returns?

The Liberal justices have assumed a tremendous amount of influence and authority... because no one rapped them on the knuckles.

Just like spoiled children whose parents don’t discipline them and remind them from time to time, WHO is in charge.

The American MSM has made gods out these very flawed and fallible people.

Simple... the Liberals and lame Republicans have systematically, over decades, morphed into stupid, lazy plugs who get into office ONLY to cash paychecks, enjoy perks, take advantage of the corrupt environment to stuff their pockets… AND to shunt their job responsibility onto someone else, (in THIS case, the SCOTUS) who are only TOO happy to accommodate!

10 posted on 07/14/2016 5:14:08 AM PDT by SMARTY ("What is freedom? To have the will to be responsible for one's self. "M. Stirner)
[ Post Reply | Private Reply | To 2 | View Replies]
To: SMARTY
Simple... the Liberals and lame Republicans have systematically, over decades, morphed into stupid, lazy plugs who get into office ONLY to cash paychecks, enjoy perks, take advantage of the corrupt environment to stuff their pockets…

Indeed. They are winners.

Isn’t this the same justice that was performing same sex weddings (illegally)at the same time homosexual marriage was before the court?

Tax returns are only an issue with a politician. We want to see how they’re getting rich on 170,000 a year. We know how trump got rich...real estate and other business deals that we t his way in almost all cases.

If I were him I wouldn’t take any pay at all from my business. I’d live off the business and charge it all to expenses.