Burning question of the day: 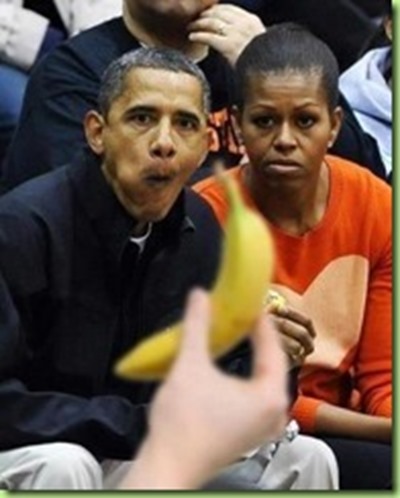 Or is it racist of me to even bring this up?

Dear God, please re-zip that banana peel and place it in the compost bin of history. And through your mercy may we be spared. Amen.

God isn’t putting America anywhere. We are. We the American people by letting the Enemy within grow and commit treason, we are the ones putting America in the trash bin.

Dear God, imagine having to watch a daily parade of middle class pastel pantsuits and mao jackets on a female POTUS every day for the next 4 years. The woman is either too middle class to know she needs to up her game in the executuve workd , or too vain and egoistic to take the advice to seek someone to dress her.

It is already there, and God didn’t do it. Americans did this all by themselves.

All of the above are Liberal Democrat Tenets. I see a pattern in the destruction of America.

They brought it all on themselves, by giving God the cold shoulder.

It won’t be God doing this at all, but the American people themselves.

Its a joke; its in effect what Comey said about Hillary.

When asked what kind of government the Founders had just instituted, Ben Franklin said, “A republic, if you can keep it.” Well, we couldn’t keep America as a republic. Through the years She has morphed into a democracy lead by aristocrats (our life-long political class).

The America the Founders envisioned is long gone. And, given the entrenched state of the current system of power, She isn’t coming back any time soon.

Yes. The Obamabastard is turning America into a Banana Republic. And Comfey, Lynch, etc are his Tonton Macoutes.

“And, given the entrenched state of the current system of power, She isn’t coming back any time soon.”

The most important question that was ever proposed to your decision, or to the decision of any people under heaven, is before you, and you are to decide upon it by men of your own election, chosen specially for this purpose. If the constitution, offered to your acceptance, be a wise one, calculated to preserve the invaluable blessings of liberty, to secure the inestimable rights of mankind, and promote human happiness, then, if you accept it, you will lay a lasting foundation of happiness for millions yet unborn; generations to come will rise up and call you blessed. You may rejoice in the prospects of this vast extended continent becoming filled with freemen, who will assert the dignity of human nature. You may solace yourselves with the idea, that society, in this favoured land, will fast advance to the highest point of perfection; the human mind will expand in knowledge and virtue, and the golden age be, in some measure, realised. But if, on the other hand, this form of government contains principles that will lead to the subversion of liberty — if it tends to establish a despotism, or, what is worse, a tyrannic aristocracy; then, if you adopt it, this only remaining assylum for liberty will be shut up, and posterity will execrate your memory.

Momentous then is the question you have to determine, and you are called upon by every motive which should influence a noble and virtuous mind, to examine it well, and to make up a wise judgment. It is insisted, indeed, that this constitution must be received, be it ever so imperfect. If it has its defects, it is said, they can be best amended when they are experienced. But remember, when the people once part with power, they can seldom or never resume it again but by force. Many instances can be produced in which the people have voluntarily increased the powers of their rulers; but few, if any, in which rulers have willingly abridged their authority. This is a sufficient reason to induce you to be careful, in the first instance, how you deposit the powers of government.

So far therefore as its powers reach, all ideas of confederation are given up and lost. It is true this government is limited to certain objects, or to speak more properly, some small degree of power is still left to the states, but a little attention to the powers vested in the general government, will convince every candid man, that if it is capable of being executed, all that is reserved for the individual states must very soon be annihilated, except so far as they are barely necessary to the organization of the general government. The powers of the general legislature extend to every case that is of the least importance — there is nothing valuable to human nature, nothing dear to freemen, but what is within its power. It has authority to make laws which will affect the lives, the liberty, and property of every man in the United States; nor can the constitution or laws of any state, in any way prevent or impede the full and complete execution of every power given. The legislative power is competent to lay taxes, duties, imposts, and excises; — there is no limitation to this power…

And are by this clause invested with the power of making all laws, proper and necessary, for carrying all these into execution; and they may so exercise this power as entirely to annihilate all the state governments, and reduce this country to one single government. And if they may do it, it is pretty certain they will; for it will be found that the power retained by individual states, small as it is, will be a clog upon the wheels of the government of the United States; the latter therefore will be naturally inclined to remove it out of the way. Besides, it is a truth confirmed by the unerring experience of ages, that every man, and every body of men, invested with power, are ever disposed to increase it, and to acquire a superiority over every thing that stands in their way. This disposition, which is implanted in human nature, will operate in the federal legislature to lessen and ultimately to subvert the state authority, and having such advantages, will most certainly succeed, if the federal government succeeds at all.

In a free republic…

All nations will go in the compost bin of history When Christ returns the only nation will be the theocracy He establishes I personally can’t wait!

God lets society do what the collective desire. If need be, He “hits” the reset button.

Billy Graham once said if God doesn’t punish America that He’d have to apologize to Sodom & Gomorrah.

He’s given us over to the reprobate mind that the Apostle Paul spoke of in Romans 1.

For those who are called by His Name:

Look up for your redemption draws nigh (Luke 21:28)

“But if, on the other hand, this form of government contains principles that will lead to the subversion of liberty — if it tends to establish a despotism, or, what is worse, a tyrannic aristocracy; then, if you adopt it, this only remaining assylum for liberty will be shut up, and posterity will execrate your memory.”

There is much hand-wringing these past two days over what has become of our nation and so many here have been quick to lay the finger of blame on the liberal agenda. While it is true that liberalism’s policies have sailed us downstream so far from our nation’s founding moorings, this has been allowed to take place right under the noses of those of us (past and present) who would hold to America’s original design. Our posterity will not care that we lamented America’s demise. They will only recall that her demise took place under our watch—and lament our spinelessness as it happened.

“But remember, when the people once part with power, they can seldom or never resume it again but by force.”

Not much that needs to be added to this thought. There is a growing climate of the inevitability of civil war/marshal law here at FR. For years there has been talk about making ready for what many probably feel is unthinkable. The actions in Dallas and the fed’s disinterest in coming down full force on this threat to domestic tranquility that is festering like storm clouds across the land make it likely that we will see this played out in our lifetimes.

“Besides, it is a truth confirmed by the unerring experience of ages, that every man, and every body of men, invested with power, are ever disposed to increase it, and to acquire a superiority over everything that stands in their way.”

The idea of government “of the people, by the people, for the people” seems so trite today. We have replaced that with “government of the governing, by the governing, for the governing”. We see Washington teeming with rascals whose designs are laser-like focused on their own situations, moving us more and more in the direction of a federally-dictated way of life. Regulations, restrictions, political correctness, the overthrow/undermining of institutions (the family, education, the church) all reek of power-wresting/forced socialization. Freedom’s cry grows distant and faint.