The conservative world exploded in outrage over George Takei's blatantly racist remark calling Supreme Court Justice Clarence Thomas "a clown in blackface," but they all got this story wrong. Takei is a very rare bird: an intellectually honest liberal.

I'm not going to cover in detail what Takei said and what Justice Thomas wrote.  You can read about it here, here, and here.

To sum up, Justice Thomas wrote in his dissent on Obergefell v. Hodges (the gay marriage case, for those who have hid their heads in a bag for the last two weeks) that the government doesn't bestow dignity and humanity upon humans--that's something reserved to God.  He cited two examples, American slavery and Japanese internment camps.

Let's look at Takei's reaction from an actor's point of view, shall we?

Any actor playing a character wants to know the character's motivation--it's a first principle of acting.  So what's Takei's motivation here?

Conservative Sean Davis at The Federalist claimed that Takei is "a simple man with a simple mind incapable of basic reading comprehension, Takei took this to mean that Thomas was denying the indignity of slavery."

Jim Treacher wrote in the Daily Caller, "Not that I doubt Takei means what he says. He really is a huge racist."

Front page contributor streiff at RedState wrote, "George Takei is a racist. There is no other way to put it. He might as well have his valet send his white robe to the cleaners to have it pressed and starched while his gardener makes a nice, flammable cross."

William Shatner who has worked with Takei for four decades, crossed swords with him many times, and overall probably knows the man as well as anyone in Hollywood, tweeted:

I am positive that George is not a racist. Let's stop the spin doctoring. https://t.co/LiolPBqufN — William Shatner (@WilliamShatner) July 2, 2015

So either Takei's a racist and has always been a racist, or his motivation is something else. First a clarification, you'll get no argument from me that what Takei said was racist, and I won't defend it.  He should check his heart.  It was hurtful, and as offensive as invoking any other black racial imagery, or Nazi imagery to a Jew (saying "to the ovens," for example).  Though he apologized, I doubt he'll really change his mind.

I spoke in the heat of anger, and uncivilly. For that I am sorry. My full remarks regarding Justice Thomas here: https://t.co/FmyX9oQvlD

But not because he's a racist.

Back to motivation: when Takei was five years old, he and his parents were removed from their home by the U.S. government, and forced to live in various internment camps until the end of World War II.  George is a "Nisei," a second generation Japanese immigrant to America, the first generation ("Issei") having immigrated from Japan.  He was born in the United States, and has full citizenship here.

Imagine a life-defining event where from the age of 5 until the age of 8-years-old, you lived in the only country you knew, which was at war with the country of your parents, treated as a prisoner.  Whether the Japanese internment was moral, immoral, practical, or legal (and I'm not engaging in argument of any position), the results include a large number of Nisei who share a defining period in their youth, framing their view of America.

Takei is also openly gay, and openly liberal.  He's also openly political, and even ran for California assemblyman in the 1980's.

One thing Takei isn't, is stupid.  He's got a Masters of Arts in theater from UCLA, and studied architecture at UC Berkeley.  Let's put out the fire burning the "stupid liberal" straw man.  Takei knows his positions.

If there was anything that would push all the buttons for a gay, liberal, political Nisei, it's a black, conservative Supreme Court justice writing a dissent on a case about gay marriage rights and invoking slavery and Japanese internment during World War II.

Takei, at 78 years old, is way beyond yelling "get off my lawn" and being curmudgeonly, and also well past caring what anyone thinks about what he says.  So he blew his stack and called it like he saw it.

A Buddhist, it's very likely that not a single Christian has ever had a meaningful impact on Takei's life, although I can't say that with any assurance other than speculation.  If you take a Buddhist with liberal political leanings and try to apply a Christian argument of dignity as God-given (the Judeo-Christian God), how can a non-Christian living in a country he's seen as biased against so many integrate that into his psyche?

From Takei's point of view, everything in his life points to Justice Thomas' remarks as cover for Christian oppression of minorities in the U.S.  It's just how he sees it.

And for that, George Takei is an intellectually honest liberal.

This explains a lot, really.

It explains why the liberal press is unwilling to cover Takei's remarks.  They can't defend it.  They can't publicly support Takei, but they can't attack him either, because he thinks like they do.  The Huffington Post covered it as straight news, giving Takei a hall pass of sorts: this happened, let's move on.

It's like taking a genuine Rolex (though caked with excrement and in need of some cleaning) and giving it to a street vendor who sells only obvious cheap fakes on a street corner.  Do you think the vendor would put the real Rolex on the table and charge a fair price for it (as a real item)?  No.  He'd hide it away, because it would immediately show how terrible the watches he sells every day truly are.

George Takei's racist rant, although repugnant, represents a real feeling, a real opinion based on a lifetime of experience.  It's genuine and raw.  It's got the same quality as another old warrior in the culture war (who's also on TV): Phil Robertson.  Phil's remarks are off-the-cuff, unfiltered, and at times, completely inappropriate, but they are the truth as Phil sees it.

The left loves to pounce hard on Phil Robertson for saying things that are many times less offensive than what Takei uttered, but conservatives defend him without hesitation, because although he may say it poorly, Robertson is clearly not a stupid man, and is speaking from a lifetime of real experience--which aligns with conservative thought.

Takei will be given a pass by the left, because they know that even if they condemn calling a Supreme Court justice "a clown in blackface," it exposes their own positions on playing the race card, the equality card, and the I-hate-America card as fatuous and duplicitous.

In other words, Takei's honest remarks make the rest of the left look like the loony hypocrites they are.

For that, I thank George Takei.  I know he is genuinely offended, and I'm okay with that.  At 78, he can be offended.  I will still watch Star Trek, and I'll still enjoy Takei's Twitter feed.

Racist comments aside, and without giving him a pass (and with him now in my prayers), I wish for Takei only that he live long and prosper.

Bah, humbug. Takei crossed a line, got spanked (probably loved it!) and is making a token non-apology.

As I read the opinion by Thomas, he was saying that even in these more horrible circumstances (slavery and internment) the people involved maintained, or at least had the potential to maintain, their dignity. Because that dignity was inherent to being human.

I’m still unclear why Takei and other object to this POV.

Perhaps it’s because it’s the concept behind Uncle Tom’s Cabin, in which Tom is shown as having great dignity even as he’s being tortured to death.

BTW, internment, while a violation of civil rights, was orders of magnitude less horrific than slavery.

He claims he lashed out at Clarence Thomas in the heat of anger.....after he had just gotten what he wanted.

This suggests - as if it weren’t already obvious - that legal enforcement of homosexual “marriage” isn’t what they want. What they want is the elimination of anyone who disagrees with them in any way. 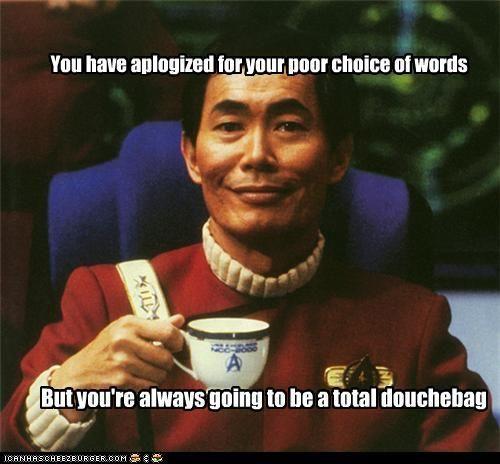 I wonder if Takei was molested at Gila River. Their living conditions were not good. Curtains separated families from one another. I hadn’t thought about it until the last few days.

"George, life is hard. It's harder when you're stupid."

This is an oxymoron.

If one is “intellectually honest”, one is NOT liberal!!!

there is no such thing as an honest Liberal.

Wonder how Takei would feel if someone called him a queen in yellow face?

That would be ugly so I won’t do it.

Gooks in the wire...

It’s a shame that reading comprehension on FR is so pow.

So, the mental midget Takei is lumping together: his “victimhood” in being interned as a child in WWII for the security on the west coast of the US vs. a potential 5th column (like it or not—one existed) AND his being a queer. He berates another “victim” class member who is a Supreme Court justice, because he does NOT participate in the victimhood whiner’s brigade.

The property crimes against Nisei are documented, and— have been compensated demonstrably to those who were injured. This is providing fodder to the “reparations” crowd who are still trying to get a pay off for being black— unprovably descended from slaves (hint: not all blacks in the US are of slave descent and somehow due money from ALL Americans because of slavery).

What an outright propaganda piece.

Steve, perhaps you didn’t notice but Robertson is correct in his NOT poorly chosen words. There is NO racial or made up word ‘Homophobic’ aspect to them.

Sulu flat out went to the the worst black ‘black’ trigger this side of the word ‘nigger’. And he did it because as a liberal, he is anklebitting the ‘Uncle Tom’ as libs see Thomas, to discredit him in any way possible. To add to the body of liberal work that has already come before and reinforce it.

This was Alynski by the book.

It’s a shame that reading comprehension on FR is so low.

So, is lifeofgrace the same as steve berman. Pimping his blog? This is an apology for what Takei clearly believes, along with him being a pervo of the newly empowered queers who think they can rule the majority with their unbalanced self-indulgence and hatred.

I guarantee Takei did not read a single word of Thomas’ writings. He took what he heard from Daily Cus and ran with it.

19 posted on 07/04/2015 6:02:45 AM PDT by Organic Panic
[ Post Reply | Private Reply | To 1 | View Replies]
To: lifeofgrace
The very first sentence in this piece was nonsense. No real conservative i.e. conservative capable of completing a thought would waste one second in outrage over anything Takei says.