I would like to thank Turd Burgelstein for pointing out that all the whiners offended by micro-aggressions, BMI’s, white privilege and harsh stares are really just this year’s crop of POWS – People of Occupy Wall Street. I will do an update on the whiners and their professorial enablers when time permits, butt in the meantime, I thought it might be fun to repost this golden oldie: it was my most popular post ever and was picked up by the Daily Mail and linked by the Instapundit.

I do find it a bit odd however that after 4 years everyone’s still whining about the same old crap. All I can say about that is: Thank You Obama!

While Lady M’s gearing up for her world record breaking jumping jack marathon, I’ve decided to perform a public service myself by highlighting the tragedy of OWS. Accordingly, I’m dedicating today’s post to the People of Occupy Wall Street (POWS). They’ll tell you in their own words how they came to be part of the 99%. A portion of all proceeds from today’s post will be donated to the 501(c)(9) charity, Graduates With Severe Economic Disorders. You can read their complete stories on the People of Occupy Wall Street website, where I’m betting you can make a donation too.

Here are the plights of just a few of the 99 percenters; I’ll let them tell you their stories in their own words: 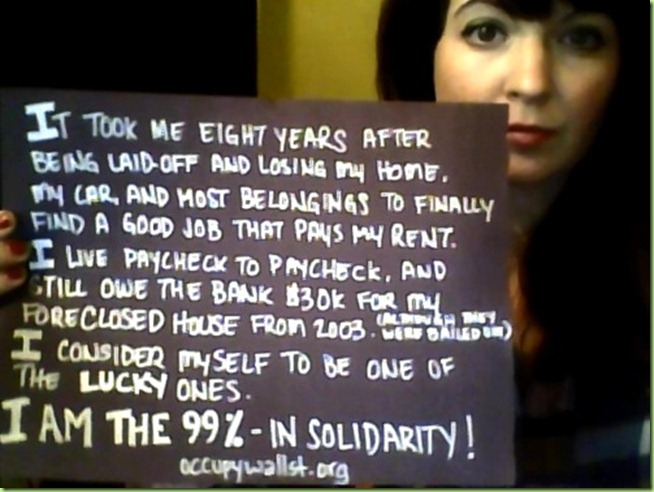 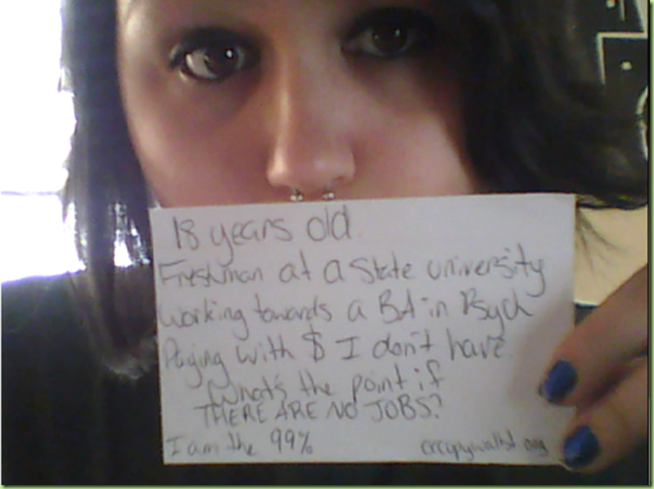 Once you get your Psych degree you’ll probably be smart enough to figure out what the point is. Butt here’s a little free job advice: it’s easier to land a job without nose balls. Especially if you’re going into foodservice, which you will be with a degree in Psych. 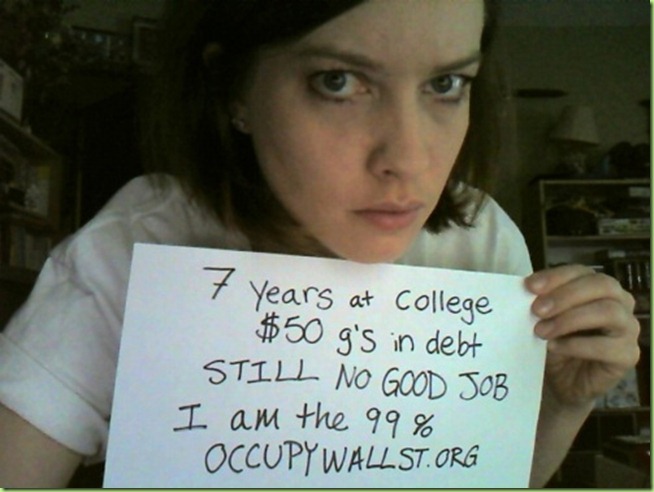 7 years? What did you major in, Government Efficiency Studies? And - this is just a nit - butt most people shorthand “thousand” with a “k” not a “g” – although the “g” does demonstrate creativity and independent thinking. Two things frowned on in Government, so maybe you could try foodservice too. 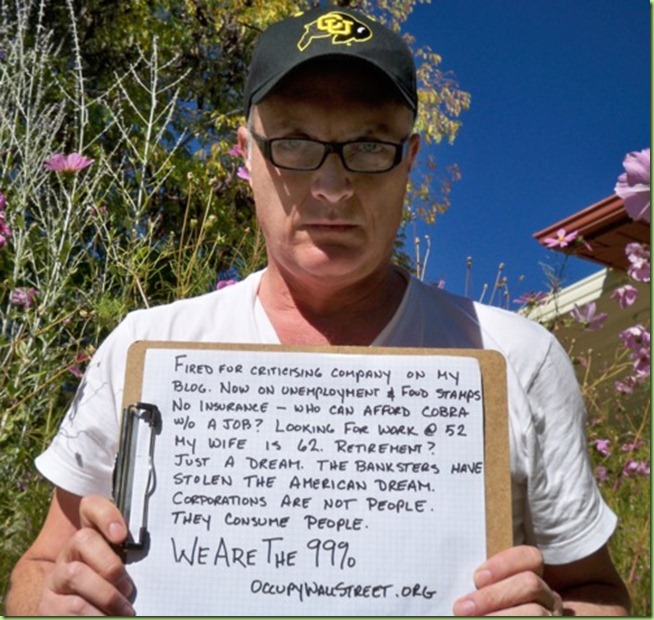 Tough lesson dude: Didn’t Mom ever tell you not to bite the hand that feeds you? Moron. 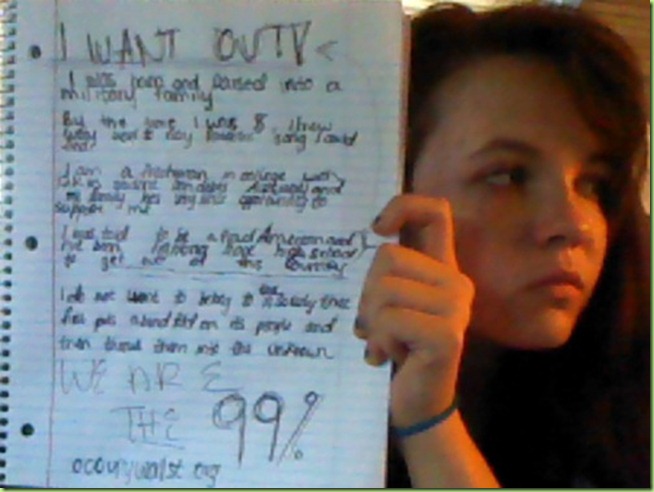 This one is unreadable, butt here’s a transcription of her key points:

I was told to be a Proud American and I’ve been fighting since high school to get out of this country.

I do not want to belong to a this society that first puts a blindfold on its people and then throws it into the unknown.”

Good news for you sweetheart! Since our borders can’t even keep people out, they sure can’t keep people like you in either! Don’t forget to pack hand sanitizer. 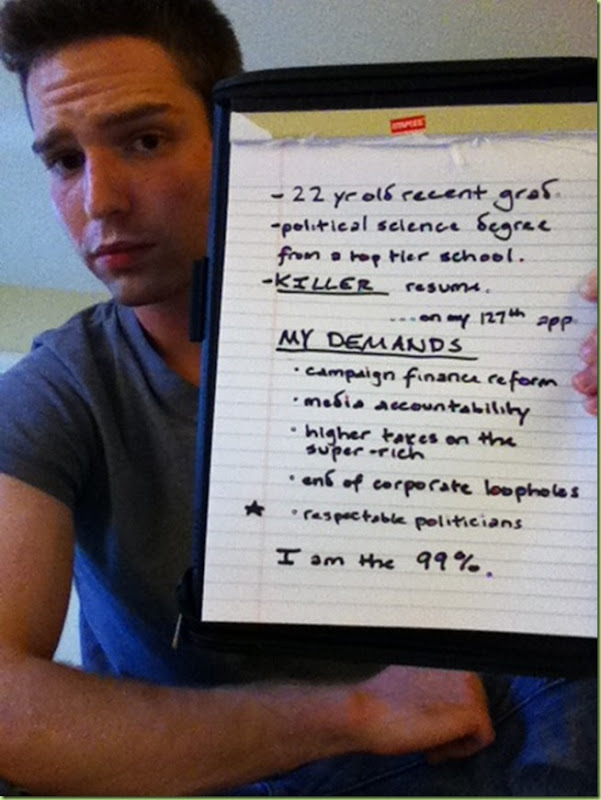 A political science degree? Isn’t that special! And still you can’t figure out why you can’t find a job? Here’s a little hint that might help you out on that 128th job app: spend less time on your demands, more time on how you might be of some use to your potential employer. You know, because they’ll be paying you, not the other way around?

This POWS has a footnote under his message. Like the young lady above he, too, is feeling like he’ll be forced to join the great brain drain and emigrate to find opportunity:

“Was promised a future and have worked my ass off to actually deserve it. Now I’m feeling like my only chance is to pursue opportunities ANYWHERE BUT the United States.”

Good luck dude. I understand that Somalia is looking for a few good political science majors from a top tier school. Don’t forget your hand sanitizer either. 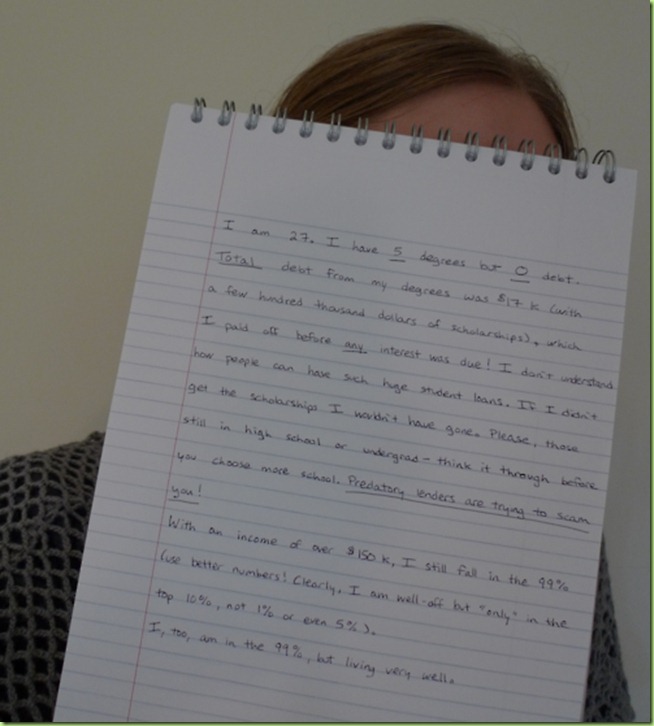 You look like a smart girl in a black bra, so let’s analyze together: 12 years of college, 3 degrees – one PhD (that’s a degree right? not a bra size?) – and still no decent job? Have you ever watched “What not to wear” honey? It couldn’t hurt. And I think it might help, as I see you do follow instructions well. That IS lucky! 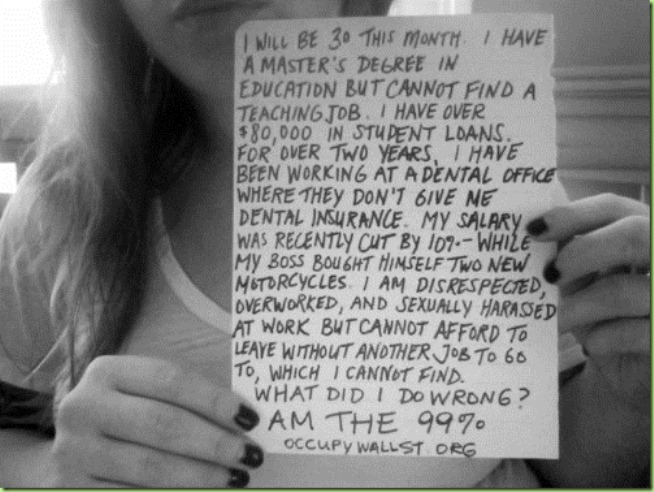 What did you do wrong? Duh! Let’s take this from the top: Nobody gets their masters degree in education BEFORE getting a teaching job! That way they can hire you at a cheap rate, pay for your masters and, since the teachers union makes them, they’ll pay you a whole lot more for getting your masters degree – that they paid for. Sheeze! You’re really too dumb to be a teacher anyway.Sorry about the sexual harassment though. And your boss’ new motorcycles? What a capitalist pig. 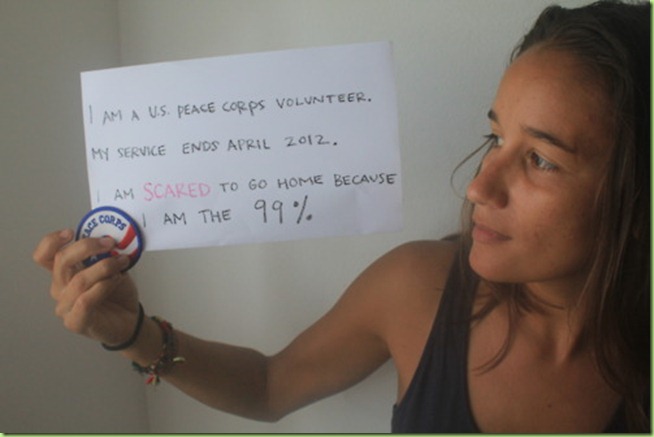 So ok, have a nice life in Botswana. Don’t forget to write. You might want to ask Mom to send hand sanitizer. 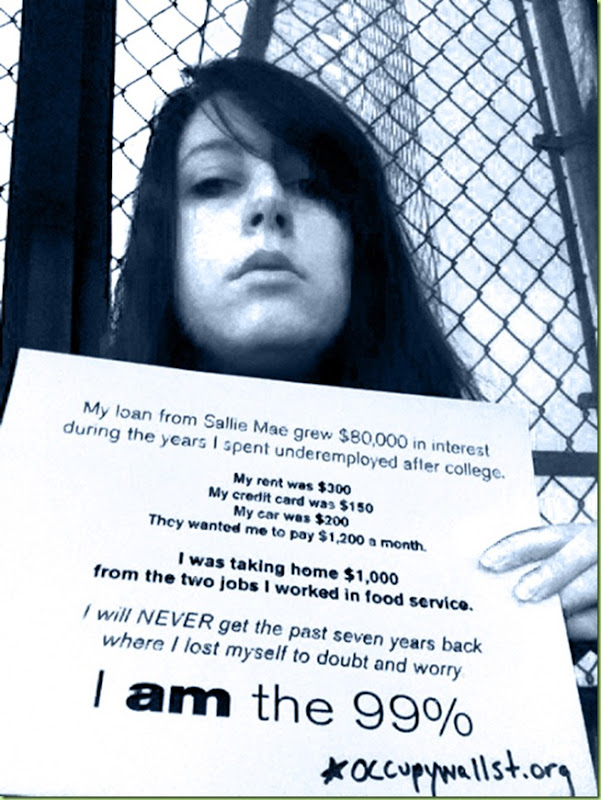 Wait, wait! Don’t tell me! You have a masters degree in something that ends in “studies” and starts with “women’s.” If your student loan really grew by $80k in  7 years of “underemployment” I’m betting you didn’t major in math. Or accounting. Or anything else that qualifies you to do anything other than inquire if your customers want to enjoy fries along with their order.

If I’m right, you weren’t “underemployed” you were “overcharged” for what passes as “an education” these days.

There are lots more stories from the annals of the POWS, and I’ll try to highlight a few more every day, just to remind ourselves of the challenges facing America in the months and years ahead.

There’s just one thing that confuses me: a lot of these POWS seem to be mad that they were forced to accumulate a ton of debt with the stew-dent loans that they were tricked into taking to support them for 7 years while completing their degrees in Recycling Studies and beer pong. Now they find out - not only can they not get a job in the field that they picked to “follow their bliss” butt they’re expected to pay their loans back too! That is so unfair. No wonder they want to spread the the other 1%’s wealth around.

Butt seriously: why are they occupying Wall Street? Shouldn’t they be occupying the administration buildings of the universities? Aren’t they the ones cranking out worthless degrees that they’re charging $10-100,000 a year for? How, exactly, is this Colgate-Palmolive’s fault? Other than the fact they’re successful, greedy capitalists?

Did greedy capitalists convince these hapless kids to spend a king’s ransom for a BA in World Politics? Did Exxon Mobil make them sign a contract to borrow $110K in exchange of a Masters in Global Social and Sustainable Enterprises? Did Bank of America trick the kids into borrowing more money than their useless degree is likely to generate in net worth in a lifetime?

I sure hate to spoil a good pity party, butt some people think the (mostly tax funded) education cartel is what created the Education Bubble. I’m sorry it burst. Butt if you’re going to protest, take it to the campuses. They’re even better equipped than Wall Street to recycle garbage. And they have nice warm buildings for when the weather turns on you.

A very special H/T to BKeyser for sharing this very special site with all of us, and for his own  contribution to the POWS: 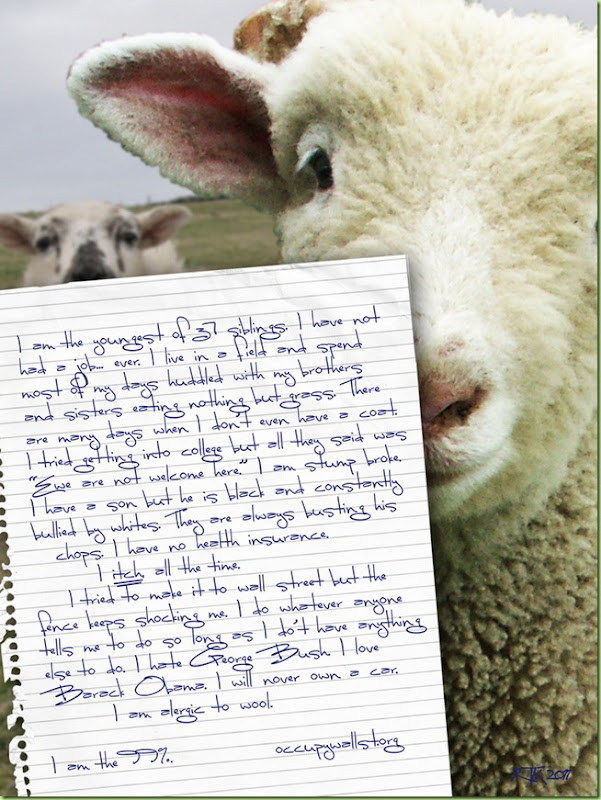 This PSA was brought to you by MOTUS: I reflect, you deride.

I don’t know, I studied, worked hard and paid off my student debts. Got a degree in Science (Chemistry.) I guess I just wasted my time in college.

I commuted to college, finished my engineering degree at night while working as a technician during the day, no debt. Am I missing something here?

I keep wanting to give in and lament how far we've fallen, but I suspect that people are basically the same now as we've always been.

These people should sue the higher edu. Institute they attended.

bhaaaa THE SHEEP made the most sense

She probably could have a nice life in Botswana if she manages to get employment. If she is a nurse, engineer or has a degree in another high demand field she probably can. But the pay will be low and since she can only apply for jobs that have remained unfilled more then 14 days she is not going to get the best jobs.

It is a nice place to live but she does need to learn Setswana.

Hope she doesn't plan on getting rich.

I don’t see anyone who majored iN engineering holding up signs?

12 posted on 05/18/2015 10:13:33 AM PDT by Oatka (This is America. Assimilate or evaporate. [URL=http://media.photobucket.com/user/currencyjunkie/me)
[ Post Reply | Private Reply | To 1 | View Replies]
To: NOBO2012
Here's a good one. A lying thief who was fired for lying and thieving. Now she has to be a thief to feed herself. WHAAA. If you see this ugly hippy mug in your shop call the cops. You'll probably smell her first. We have had a wasted life. We did the right thing...