James Robertson of Detroit: Look What You Can Do Without the Government
Michelle Obama's Mirror ^ | 2-3-2015 | MOTUS

“It might be tough, but my dad used to say, tough times don't last — tough people do." – James Robertson 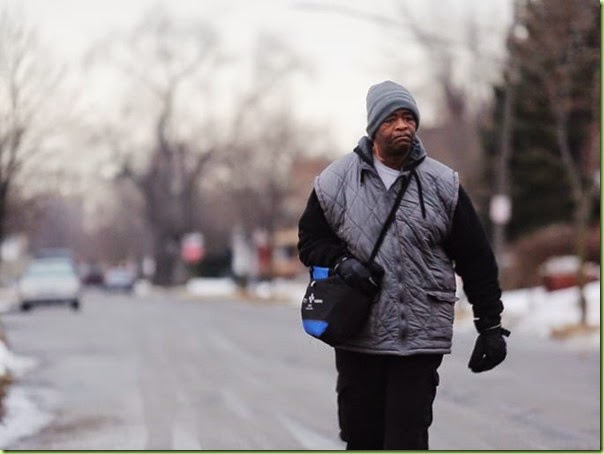 James, on his 21 mile daily commute on foot

I know we could all use a feel-good story, and I have a doozy for you today.

It comes to us from - of all places – Detroit. As you read James’ story you may begin to understand what once made Detroit a great city; a monument to American enterprise and the “Arsenal of Democracy” before the liberals took it over and tried to “fix” it with government dollars. It’s because people like James used to be the norm here, not an oddity of such note that it’s news worthy.

This is James’ story:

But as he steps out into the cold, Robertson, 56, is steeled for an Olympic-sized commute. Getting to and from his factory job 23 miles away in Rochester Hills, he'll take a bus partway there and partway home. And he'll also walk an astounding 21 miles. 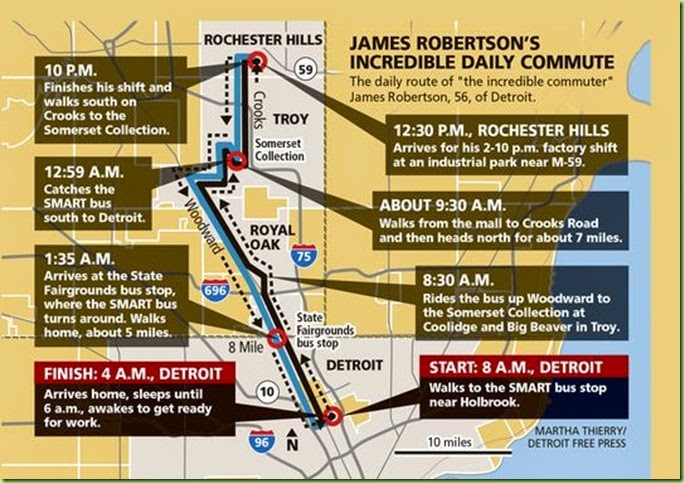 James’ daily commute; notable only because 21 miles of it is covered on foot. 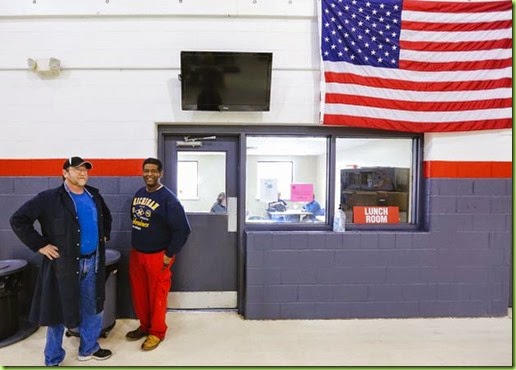 Why does he do it?

Robertson has simple words for why he is what he is, and does what he does. He speaks with pride of his parents, including his father's military service. "I just get it from my family.

"I can't imagine not working," he says

How does he do it”

"One word — faith," Robertson says. "I'm not saying I'm a member of some church. But just before I get home, every night, I say, 'Lord, keep me safe.' " Robertson adds, "I should've told you there's another thing: determination."

While the reporter who filed James story originally also had an undercurrent storyline running about the lack of mass transit in the “motor city” the only real story here is of one man’s extraordinary work ethic, commitment and perseverance. It is the story of James Robertson, doing what he has to do to keep his job and keep food on the table. 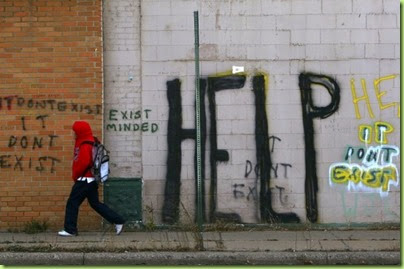 God helps those who help themselves.

The author makes no note of the fact, and probably is to young to know, that this city was once predominantly populated by people just like James, both black and white citizens who were fiercely committed to doing whatever it took. It was that type of mindset that created the modern automotive industry and all of its spin off businesses. It’s the kind of mindset that vanishes when government steps in to do for you what you once were able, and willing, to do for yourself, no matter how hard.

But that’s not the feel-good part of the story. That would be here. On reading James’ story a young Wayne State computer science student decided to set up a crowd funding site to raise enough money for James to get a car and pay the high cost of insurance on it in Detroit, Several others had the same idea; they co-ordinated their efforts. Meanwhile a downriver auto dealer offered to give James his choice of a 2014 Chevrolet Cruz or Sonic. Many others offered used cars, money or rides. As of Monday night, $130,000 had been raised. A vice-president at a local bank, who befriended James after seeing him on his daily trek so often that he finally stopped to see if he could give him a lift, has offered to set up an oversight board to help James manage the donations that are rolling in. 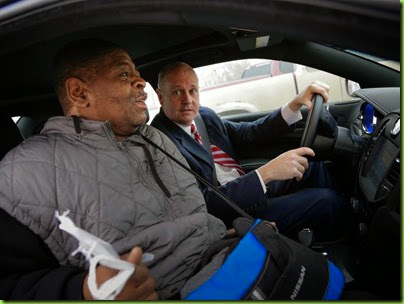 James getting a lift from his friend, UBS banker Blake Pollock.

Most amazing of all: this happy outcome happened without the intervention of one single government agency or service: the Justice Department was not consulted to make sure James’ civil rights were not being violated. The Labor Department was not called upon to demand that James hourly wage be increased. The EPA did not have to order an environmental impact study on James’ new car, nor was Commerce consulted regarding the economic analysis of James’ additional free time. OSHA did not have to issue new regulations for walking to work, and HHS did not show up to perform a mental health assessment on James. Although I am fairly certain that the IRS will be on site shortly to extract their “fair share” of James endowment.

Instead, James story just struck a note in the hearts of middle class Americans in middle America: empathy for a fellow human being who has been doing for a decade what most people could not imagine doing for a day. And they did what good, decent people people have always done; they rallied their resources to assist James. Because often people of good heart are more than willing to help out a fellow human being without the manipulation of social programs or the coercion of monetary reward/punishment. More amazing still to the bureaucrats in Washington, all this good will appears to be without bias; colorblind acts of random kindness taking place in Detroit, one of the most racially segregated cities in the country. That definitely doesn’t fit the current racial profiling template of the Obama administration.

So that’s all, just one little story of an amazing man and an amazing community-of-man that has responded to him. Allow it to lessen the grip that cynicism has had on your heart. America is still the greatest country on earth. Do whatever you can to keep it that way. 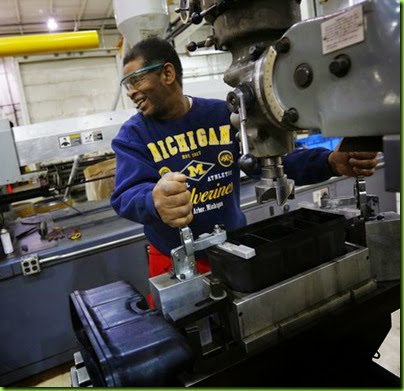 All I know for sure is that if Obama had a son, he wouldn’t look anything like James Robertson

Today’s post was brought to you by Dewey From Detroit.

See what the private sector can do to ‘help people’? If the government had done it, it would have kept 70% of the money to “manage the program”

Liberals absolutely HATE it when private citizens step up and “usurp” their perceived role of gov’t.

Amazing. The guy is 56 years old, a time when many government employees would be retired or even double dipping with a second job. He sleeps, at most, four hours per day during the week if you count naps he may get on the short stretches of bus rides.

If he hasn’t missed a day of work for so long then how is it that he can’t afford a car capable of getting him to work and back? It doesn’t take much to qualify for some kind of loan for a car, especially if the applicant has a good work record. And why couldn’t his employer give him a loan? Something doesn’t quite add up here...Hell, he probably makes enough to have saved enough to pay cash for a car that will do the job and to at least keep himself from feeling the extreme conditions of these Michigan winters as much as he does...unless he prefers it that way. I hate to see people living unnecessarily with hardships like this. I think this guy should do more to improve his situation.

The picture of him praying before lunch at work would have bee great.

There’s a kick starter fund with over sixty thousand in it.

Compare Mr Robertson to the ungrateful pieces of trash who protest for $15 per hour to work part time at McDonalds. I doubt one of them would walk a mile for it, let alone 20 miles for $10.55.

When we were at Oklahoma State U, we lived off campus Junior and Senior years. We walked to campus, to class, walked back home for lunch, back to campus, several times a day. I had an old 1954 jalopy but there was NO PLACE to park on campus if you were a student. So we walked. Now they have a parking lot for students who “don’t want to live on campus, so they have a place to park” Kids today are SO SPOILED!

More power to him.

I am truly astounded. I really would draw the line at losing that much sleep. It cannot be good for one. I know, this man is doing it. Just cannot see that as the norm.

Hopefully he really can get that car to at least increase his regular sleep.

Would you want to work next to a guy who walked 21 miles...?

I sure hope John Kasich sees this!!

And they are not living in cinder block 10 X 14 rooms with bunk beds with desk underneath and a shared closet that has a fabric curtain for a door.

They are living in Luxury Condo's on campus that are prolly better than most freepers domiciles. And we wonder why it is north of 20, 30 , 40k a year to go?

Walking that much, the dude is gonna live until he’s like 140 years old!

The one thing I haven’t seen mentioned is the kind of physical shape this guy is in.

All those years of that kind of walking have put this fellow in the kind of peak physical shape most people can only dream of and I would imagine this fellow also eats right, fruits and vegetables so he probably doesn’t get ill very often either.

He has been doing this so long that he is used to getting by on four hours of sleep and maybe that is all he needs.

Somebody at that company needs to help him get a new car.