Let’s watch one of the Professors try to school the stupid people, because you really can’t watch this often enough:

Apparently, by their own accounts, neither Jonathan nor Ben are geniuses:

“I'm not a Mensa member. I have no idea where that rumor came from. I never have been, and I doubt if I ever will be.” Ben Stein

Gowdy: “So you’re a professor at MIT and you’re worried about not looking smart enough?”

Gowdy: “OK. Well, you succeeded, if that was your goal.”

And both seem amazed at how easy it is to defraud people these days:

“Lack of transparency is a huge political advantage. And basically, call it the stupidity of the American voter or whatever, but basically that was really really critical for the thing to pass… Look, I wish Mark was right that we could make it all transparent, but I’d rather have this law than not.” –Gruber

“It's really amazing that in the age of unbelief, as a smart man called it, there isn't even more fraud. After all, with no God, there's no one to ever call you to account, and no accounting at all if you can get away with it.” – Ben Stein

Of course – because there IS a God - sometimes there are people like Trey Gowdy around, to “call you to account.”

(Because you can never watch a PhD grovel often enough either)

Okay, I’m just going to go ahead and make the call: I’m going with no, not separated at birth. Although Ben Stein was also a professor and also worked for a U.S. President, as far as I know he was never the architect of one of the biggest scams in United States history. And while he sometimes takes positions to the left of center, he does still believe in free market capitalism. Still, the physical resemblance is awesome. Maybe the Grub can finish out his career in Hollywood, where glibness and making yourself seem smarter at other’s expense is valued more highly. 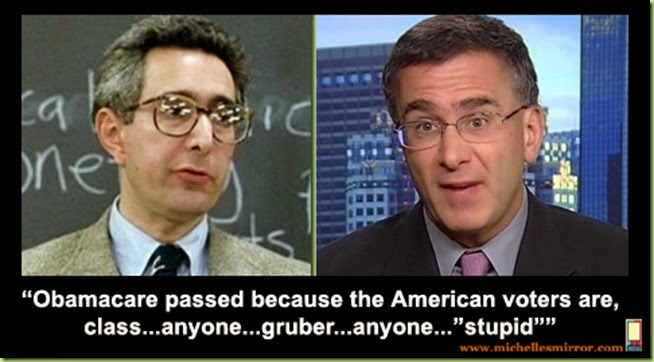 “If we try to engineer outcomes, if we overturn tradition to make everyone the same, we ruin society. If we upset tradition to allow for an equal shot at the starting gate, everyone wins, except for the charlatans and would be dictators.” – Ben Stein

Gruber is no dummy. What he said is perfectly true....but the Democrats just didn’t want it to come out.

I love that his little sign says Ph.D, not just Mr. Gruber. Then he goes on to prove just how little that means.

No one asked Gruber if all his other paid analyses were as bad as the one hid did for Obamacare.

Anyone who paid this moron for anything should demand a refund

“Liberalism”, or whatever it is called,

cannot succeed if the truth is known about the goals of the agenda.

People reject it. Liberal elites inherently understand this, and some even admit it.

Gruber is stupid, but Obamacare remains, and Gowdy will fund it.

Who is the stupid one again?

He’s not dumb, he just got caught because he was a bit too cocky. But he will pay no price and what he did to us will stand.

We may get a few jollies by seeing him embarrassed for a few minutes but he’ll get the last laugh.

Gruber was separated from Eddie Deezen. Actually, has anyone ever seen Gruber and Deezen together in the same room?

He was “playing” the fool. A tactic used to deflect the criticism. If he is a “bigger” fool than first thought, then he is dismissed as just a fool. I think it’s working. I may be one of the ‘STUPID” people, but I could see his tongue in his cheek every time he “admitted” he was trying to make himself look smart. To liberals an apology makes everything go away. Snow job for the stupid people.

Yep. I doubt any sane person (on either side of the aisle) buys the transparently laughable garbage about his comments being “nothing more than an attempt to make himself look smart”. This is not about the truth (which both sides know, full well—i.e. that Gruber was being sincere in his alleged “glib and insulting” comments, and that he truly believed the CONTENT of what he was saying); this is about establishing plausible deniability (i.e. “if I throw enough B.S., they won’t be able to convict me by court-of-law standards”).

I’m amazed at the people who actually seem to have been taken with the idea of Gruber’s STYLE of commentary (and his entire “apology” is ENTIRELY about his style), rather than about the CONTENT. If he were to have said, “The American people are far too busy, brilliant, and important to be bothered with the content of a law which they would agree is wonderful, so let’s not bother with transparency!”, would the issue be substantially different? Obamacare was passed on false pretenses—with or without polite delivery and descriptions. Is this so hard to understand for these people?

Frankly, I’d be much happier if he called every last person in the USA “knuckle-dragging, naive idiots who would lose a wits contest with a box of rocks”, but then DID THE RIGHT THING.